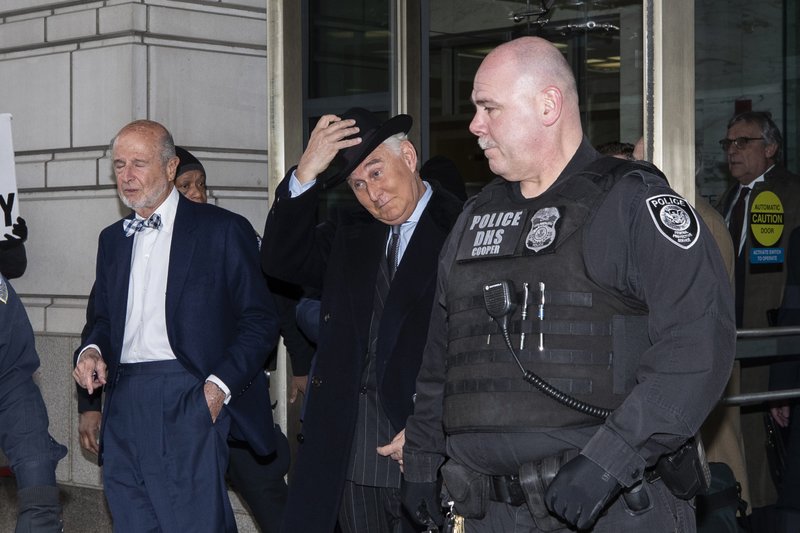 Roger Stone, center, puts his hat on as he departs after his sentencing at federal court in Washington, Thursday, Feb. 20, 2020. President Donald Trump loyalist and ally, Roger Stone was sentenced to over three years in federal prison, following an extraordinary move by Attorney General William Barr to back off his Justice Department's original sentencing recommendation. The sentence came amid President Donald Trump's unrelenting defense of his longtime confidant that led to a mini-revolt inside the Justice Department and allegations the president interfered in the case. (AP Photo/Alex Brandon)

WASHINGTON -- U.S. District Judge Amy Berman Jackson on Tuesday called in nearly all members of the jury that convicted Roger Stone on charges related to the Russia investigation in order to answer questions on allegations of juror misconduct.

Stone filed a request for a new trial on Feb. 14 -- the day after President Donald Trump tweeted about the forewoman of the jury.

Though he did not name her, his comment referred to Tomeka Hart, a former president of the Memphis City Schools Board of Commissioners and unsuccessful Democratic candidate for Congress. Hart had identified herself as the forewoman of the jury in a Facebook post, saying she couldn't "keep quiet any longer" in the wake of the Justice Department move to reduce its sentencing recommendation for Stone from the seven to nine years recommended by front-line prosecutors.

During a trial, jurors are not allowed to read news accounts or social media posts about the case or discuss it with anyone until deliberations, but after their verdict is rendered, they are released from duty and can speak publicly if they wish.

Jackson told Stone's lawyers that she had seen nothing to support his claim that something untoward occurred, but she was taking the extra step of questioning jurors.

Eleven of the 14 jurors turned up, and she permitted the lawyers to choose two for questioning. They chose a man and a woman, who were questioned by Jackson. The lawyers opted not to question the jurors themselves.

The man said nothing untoward happened; they'd weighed the evidence and deliberated to reach a conclusion. The woman said no one brought in a social media post or news article about the case, and no one discussed news accounts during the trial.

Jackson later questioned the forewoman, who confirmed she had posted articles critical of Trump's policies online, but said she had done her job as a juror fairly and did not look at media reports during the trial.

Jackson said she will rule at a later date.

Stone defense attorney Seth Ginsberg alleged that the forewoman answered falsely when she said on a jury questionnaire that she had no opinions about the FBI, Justice Department or special counsel Robert Mueller's investigation of Russian interference in the 2016 U.S. election that would affect her impartiality.

Ginsberg also said the forewoman was not truthful when she denied recalling commenting publicly on Stone's case.

"She failed to disclose evidence regarding her strong views of Mr. Stone and the political issues in this case," Ginsberg said.

Prosecutor J.P. Cooney said none of the postings made by the juror during the trial, from Nov. 6 through Nov. 15, were related to Stone's case when he and another prosecutor examined them two or three days after Stone's Feb. 14 filing.

He added, however, that some of links have subsequently been disabled.

Stone's lawyers said they did no Google searches on potential jurors before the trial. Jackson asked why the posts suggest she misled them.

"It's a question about did she lie?" Jackson asked. "I want to know what she lied about in this questionnaire."

Jackson told Stone's lawyers that it didn't matter if she posted articles critical of Trump because that would not mean she could not render a fair verdict.

Stone was convicted on all seven counts of an indictment that accused him of lying to Congress, tampering with a witness and obstructing the House investigation into whether the Trump campaign coordinated with Russia to tip the 2016 election.

Information for this article was contributed by Colleen Long and Michael Balsamo of The Associated Press; and by Spencer S. Hsu, Matt Zapotosky and Paul Duggan of The Washington Post.