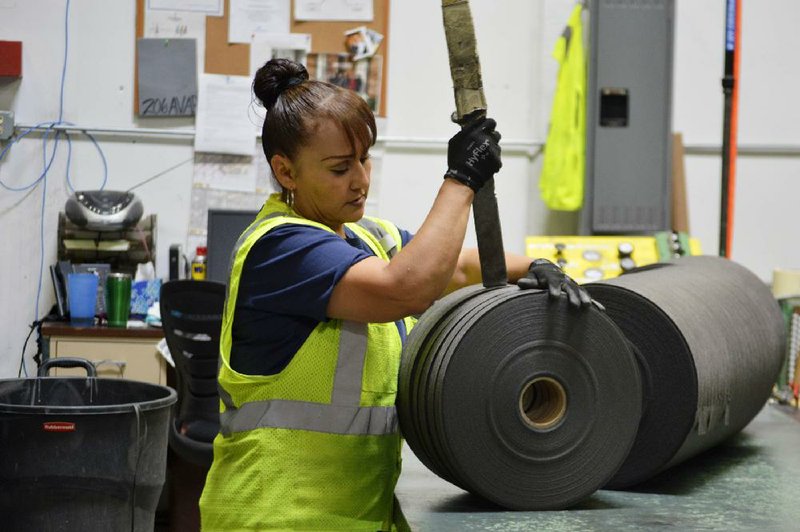 An Acme Mills employee works in 2018 in Santa Teresa, N.M. Border trade leaders say they are optimistic about the 2020 trade forecast with Mexico, especially at the Santa Teresa Port of Entry in New Mexico. (AP/Russell Contreras)

LAS CRUCES, N.M. -- Border trade leaders are expressing optimism for the 2020 trade forecast with Mexico -- especially at the busy Santa Teresa Port of Entry in New Mexico -- after the new free-trade agreement.

That's because officials of the port, which has long lacked the ability to process hazardous materials, expect that to change by the end of 2020., the Las Cruces Sun-News reported. Adding a hazmat containment site could increase the port's volume of traffic by 20% -- from 600 trucks per day to 720.

"By piecing together that hazmat capability, we're going to get a lot more traffic and be able to attract a lot more prospects," Jerry Pacheco, president of the Border Industrial Association in New Mexico.

The general optimism comes after the uncertainties governing the specifics of the United States-Mexico-Canada Agreement -- which replaces the North America Free Trade Agreement -- have been ironed out, U.S. Sen. Martin Heinrich, D-N.M., said.

"I think, now that we have a level of certainty as to what the regulatory environment looks like, that will provide more confidence in long-term investments and the potential for growth in this particular port of entry," Heinrich told the Sun-News. "I think it means more economic activity. I think it means more volume, and we need to plan for that. And the sooner, the better."

Marco Grajeda, executive director of the New Mexico Border Authority, said he believes that having a finalized version of the agreement will only benefit the state's ports of entry.

"I think having a completed, updated USMCA is going to mean a great deal," Grajeda said. "The re-drafting -- and the way it was handled -- created some instability for our region. We're looking at opportunities, ways that we can benefit. One of those is Mexico opening up its energy sector for U.S. fuel. That's one of the reasons we're pushing to get a hazmat containment site at the port of entry."

Currently, the Santa Teresa Port of Entry is not authorized to permit the transport of hazardous materials. Grajeda said he expects that to change this year. In order to make this happen, the port needs a dedicated hazmat containment site.

"This is really the last piece of the puzzle to be able to transport something like fuel to Mexico," Grajeda told the Sun-News.

Grajeda said only one of El Paso's port of entries is hazmat approved -- the Ysleta-Zaragoza port -- so there's only one in the region. "Columbus has a hazmat containment site, but I'm not sure that they get any hazmat cargo, since they mainly deal with agricultural products," he said.

Heinrich said he expects the growth at Santa Teresa's port of entry to outperform 2019.

"I would expect continued growth. How much more will be limited by whether or not we can solve those external issues," Heinrich said, referring to the port's infrastructure, hazmat and staffing needs.