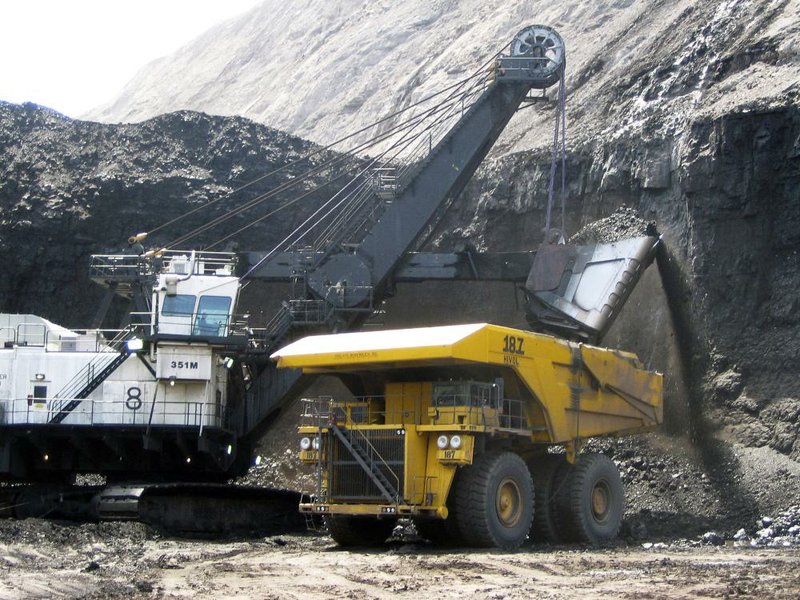 The Federal Trade Commission has filed suit to block a merger between two of the country’s largest coal mining companies, Peabody Energy and Arch Coal, owner of the Black Thunder mine in Wyoming, shown here. (AP/Matthew Brown)

The Federal Trade Commission issued a complaint against Peabody Energy and Arch Coal, both based in St. Louis, in the agency's administrative court Tuesday in Washington. The companies already are the biggest miners in the Powder River Basin in Wyoming, accounting for 60% of production in the top-yielding U.S. coal region. They announced the merger in June.

Talks to merge under terms acceptable to the FTC have been unsuccessful.

Competition between Arch and Peabody that has helped keep down coal prices would go away, the FTC contends.

"That loss of competition would likely raise coal prices to power-generating utilities that provide electricity to millions of Americans," FTC Bureau of Competition Director Ian Conner said in a new release.

The FTC said it authorized its staff to request a temporary restraining order and preliminary injunction in U.S. District Court in St. Louis to keep the joint venture from occurring before an administrative trial can be held.

The companies vowed in a joint news release to fight the complaint and keep pursuing the merger, saying it would help them compete against natural gas and other inexpensive sources of electricity.

"We believe that the commission has reached an incorrect decision that should be rapidly remedied within the court system to allow customers and others to benefit," Peabody President and Chief Executive Officer Glenn Kellow said.

Powder River Basin coal is cleaner-burning than most other U.S. thermal coal, enabling electric utilities to burn it without installing certain expensive pollution control equipment. The coal lies in thick, shallow seams that make mining it inexpensive. Rail lines send the coal to power plants in the Midwest and beyond.

But only three other companies are in a position to compete with Arch and Peabody in the basin. Meanwhile, regulatory and cost barriers for new players to come in and mine the federally owned coal are high, the FTC noted in its complaint.

The proposed merger coincides with bankruptcies that since 2015 have affected every major mine in the basin including two owned by West Virginia-based Blackjewel, whose 2019 bankruptcy shut down two major Wyoming mines, Eagle Butte and Belle Ayr, for more than three months.

Together, the mines yielded almost 170 million tons, more than the next 11 largest U.S. coal mines combined.

The merger also would involve two smaller mines in Colorado, Peabody's Twentymile mine and Arch's West Elk mine.

Wyoming Gov. Mark Gordon criticized the FTC move. "I believe this complaint by the Federal Trade Commission is a wrongheaded attempt to drive a nail into an industry which is struggling to adapt to a rapidly changing marketplace," the Republican said in a statement.