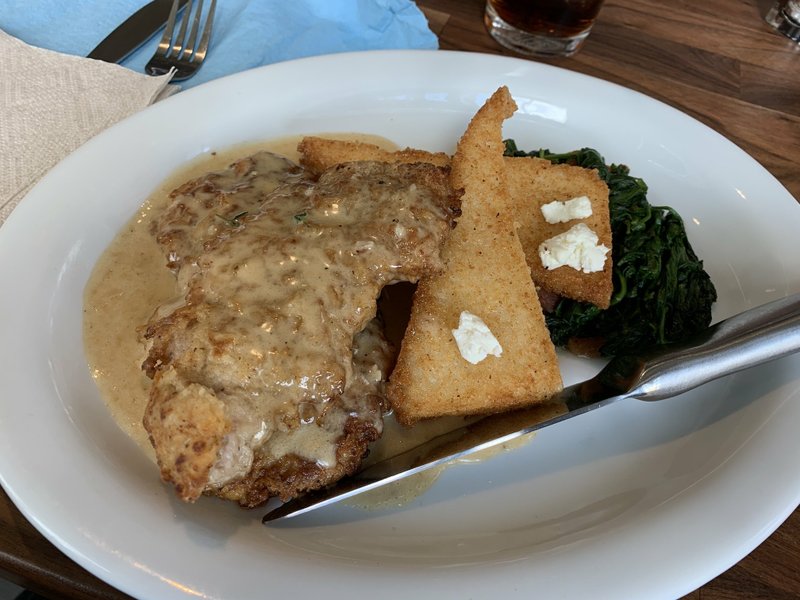 There are two halves to Hill Station on Kavanaugh Boulevard in Little Rock's Hillcrest.

Owner Daniel Bryant salvaged and completely rebuilt the interior of the landmark former Helmich's Auto Service station and put his kitchen into it, and fused it to a newly built bar and dining area.

And after several delays in getting the doors open, it has quickly become a pleasant gathering place in an area that has been bereft of a pleasant neighborhood bar since the closing of the Afterthought across the street.

We really didn't expect the place would be packed at mid-afternoon on a Saturday. But it was. (To be fair, there was a Razorbacks basketball game on the two large bar TVs.)

The bar features a number of craft and commercial beers on tap and a range of retro and modern cocktails. The menu is primarily elevated bar food, but what really elevates it is the quality of the meats in the sandwiches and entrees, which comes from nearby H.A.M. (formerly known as District Fare and originally Hillcrest Artisan Meats).

H.A.M., also owned by Bryant and operated by founder Brandon Brown, who is in and out of the Hill Station kitchen, supplies the smoked turkey for the Smoked Turkey Reuben ($10), the H.A.M. Market bacon for a variety of items, the curry chicken for the Curry Chicken Salad ($10) and presumably the offerings on the House Charcuterie Board ($21) and mortadella, salami, prosciutto and other carnivore-catching sandwich contents.

There's not as much seating available as you'd have guessed from the size of the new building — it's actually rather cozy, seating just about 60, at decently separated tables for two or four with solid butcher-block-type tops; at four metal-framed, vinyl-padded quasi-booths and at the dozen very comfortable elevated chair-stools at the capacious, spacious bar, which occupies more than half the main room space. A couple of tables are set up for larger parties, including a communal table in the interstitial space between the new build and the original service station. On the walls is a collection of black-and-white photos of Arkansas structures taken in the 1980s by Geoff Winningham.

Patrons can also order drinks (and, eventually, food) via a garage-style door behind the bar that opens in fair weather to a small patio and the large fenced-in area of crushed gray granite gravel and a handful of still-bare trees, with large heater towers. It's also an overflow area for customers waiting for tables and on a recent weekend a play area for a cute puppy. (The bar, by the way, has a built-in dishwasher. And the hefty bar glasses are etched with city maps — we spotted Boston, Lexington, Ky., Birmingham, Ala., and Austin, Texas, among others.)

The largest swaths of the printed menu cover burgers, sandwiches, starters and salads; a small patch in the lower right-hand corner shows the three entrees.

We were very much impressed with the Hog and Cake ($18, which Brown told us is his personal favorite) — two large and quite tender pork tenderloin medallions, lightly breaded and pan-fried and topped with a yellow-brown pan gravy in which we discerned a possible hint of mushrooms. It's served with two triangular grit cakes specked with spreadable goat cheese and a slightly salty, slightly spicy spinach sauteed with bits of tomatoes.

We can also recommend that Smoked Turkey Reuben, the turkey stacked thickly with Swiss, sauerkraut and a layer of tart Thousand Island dressing on thick, seeded rye bread. The sandwich is enormous and the half we took home was still tasty and surprisingly not at all soggy — we expected the dressing and the kraut juices to leach further into the bread than it did — as five-hour leftovers.

We were somewhat less enthusiastic about the Grinder ($10), salami and thin-shaved mortadella and ham with curly-shaved iceberg lettuce and a vinaigrette on a toasted Community Bakery hoagie roll — also, though, we had the kitchen hold the red onion, grated cured egg yolks and pepperoncini peppers. The meat, as we noted above, is what makes this worth ordering, as well as the huge portion size.

Bryant, when he announced this place was in the works, noted that he would serve burgers, but you shouldn't consider it a burger place. To that end, the kitchen makes five burgers, four of them with meat — a thick patty, 8 ounces, char-grilled, $12, or thin, 4 ounces, flat-top seared, $8 (a double thin patty is $4 more) — and one veggie. The beef is locally sourced from 44 Farms.

We went with a thick-patty H.A.M. Burger, topped with H.A.M. Market bacon, a reasonable layer of gruyere and a lighter layer of aioli, plus — and we had the kitchen hold these — mixed greens (billed as from Malvern's Arkansas Natural Produce), tomato and red onion. It's a respectable burger but nothing special. The bacon is thick and mildly flavored, not ideal for anyone who likes their burger-topping bacon crisp or dominant; there's just enough aioli coating the bottom part of the bun to impart a slight garlic tinge.

Sandwiches and burgers come with a hefty dill pickle spear and a generous pile of crisp Zapps chips; crisp shoestring fries are a worthwhile $2 upgrade, and also available as a $3 side; other options are a small house salad, a lentil salad and Mac-n-Cheese, which we enjoyed as a good, filling, low-cost appetizer. (Other appetizer options: Mike's Bean Dip, $8; grilled artichoke halves with roasted garlic aioli, $7; oven-toasted H.A.M. Market spicy pimento cheese with crostini, $8; and the Brown-recommended Grit & Goat, $8, goat cheese grit cakes served with crispy sage and confit tomato.)

We let our server upsell us into a decent $4.50 chocolate shake for a to-go dessert; it came with an almost fluorescent green straw suitable for the size of glass it would have come in if we'd had it in house but ridiculously long for the standard plastic to-go cup. Service on multiple visits could not have been friendlier, more helpful or more efficient.

Bryant has said he wants his restaurant to be a neighborhood spot to which folks will walk and bicycle, which is important because although there's a small parking lot behind it, accessible from North Beechwood Street, the half-dozen other restaurants and cafes on that block of Kavanaugh alone makes the prospect of nearby street parking iffy at best.

Print Headline: King of the Hill