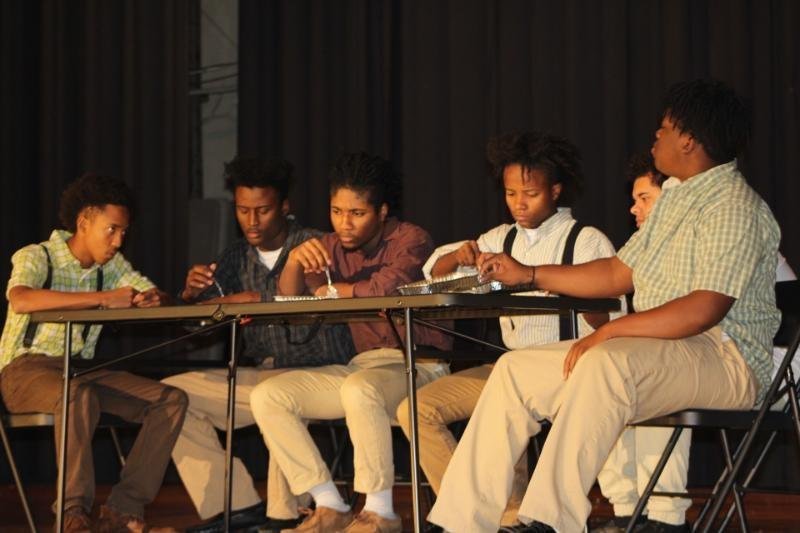 Students from Meridian High School in Mississippi -- Xzavier Henderson (from left), Isaiah Matthew, Josh Davis, Ka'Lerion Alford, Gregory Melton and Ja'Braun Smith -- in a scene from the play Death by Design (The Secret Holocaust of Wrightsville, Arkansas) (Special to the Democrat-Gazette)

A play about a 1959 fire that killed 21 black teenagers at a detention center in Wrightsville will make its Arkansas debut tomorrow at Mosaic Templars Cultural Center in Little Rock.

Death by Design (The Secret Holocaust of Wrightsville, Arkansas) will be performed by students from Meridian High School in Mississippi. The play was written by the school's theater teacher, Randy Ferino Wayne Jr. There will be two shows tomorrow and another on Saturday.

Death by Design (The Secret Holocaust of Wrightsville, Arkansas)

Wayne learned of the March 5, 1959, dormitory fire at the Negro Boys Industrial School in Wrightsville while searching for ideas for a new play.

The school's dormitory doors were locked from the outside and the fire mysteriously ignited at around 4 a.m., according to the Central Arkansas Library System Encyclopedia of Arkansas. Forty-eight children, ages 13-17, escaped by knocking out window screens, but 21 burned to death inside.

"I read the story, and it was so heart wrenching," Wayne said last week from Meridian. "I'd never known about it, so I started asking around and [not many other people] knew about it. So, I wanted to make a stage production and bring it to life."

The school, founded in 1923 in Jefferson County and relocated to near Wrighstville in the mid-'30s, was for black male delinquents and orphans. A 1956 report by sociologist Gordon Morgan documented squalid conditions at the school, according to the Encyclopedia of Arkansas.

"Many boys go for days with only rags for clothes," he reported. "More than half of them wear neither socks nor underwear during [the winter] of 1955—56.... [It is] not uncommon to see youths going for weeks without bathing or changing clothes."

Wayne started writing plays based on historical events for his students to perform in Mississippi theatrical competitions — Death by Design won best overall theatrical experience, among other awards, at a recent statewide competition — and has also written plays about Emmett Till and George Stinney Jr.

Till was the 14-year-old black boy who was killed Aug. 28, 1954, in Money, Miss., after allegedly whistling at a white woman. Stinney was 14 years old in 1944 when he was executed after being accused of murdering two white girls in South Carolina. His conviction was overturned in 2014 when a court ruled that he had not received a fair trial.

Wayne knew he wanted to bring Death by Design to the state where the tragedy happened and got a $3,500 grant from the African-American History Commission to pay for bringing the 30-plus students involved with the production to Little Rock.

He and his students will also tour Little Rock Central High School and the Haven of Rest Cemetery, where 14 of the fire victims were buried in a mass grave.

"We're amped up. We're going to put on a performance, and we will also get to learn and gain knowledge," he says. "It's one thing to perform a production like this, but to perform it where all of this took place, it takes it to another level. You get chills."

The cultural center jumped at the chance to premiere the play here, says Director Christina Shutt.

"When we found out about the play and the great work that Randy does with his students, we said, 'Yes, please come.' I suspect it will be of high quality and something we will be proud to have here in Arkansas."

An event at 5 p.m. before the second performance Friday will feature the Philander Smith College Creatives. A screening of the documentary Always in Season, about the 2014 death of teenager Lennon Lacy in Bladenboro, N.C., will follow Saturday's performance.