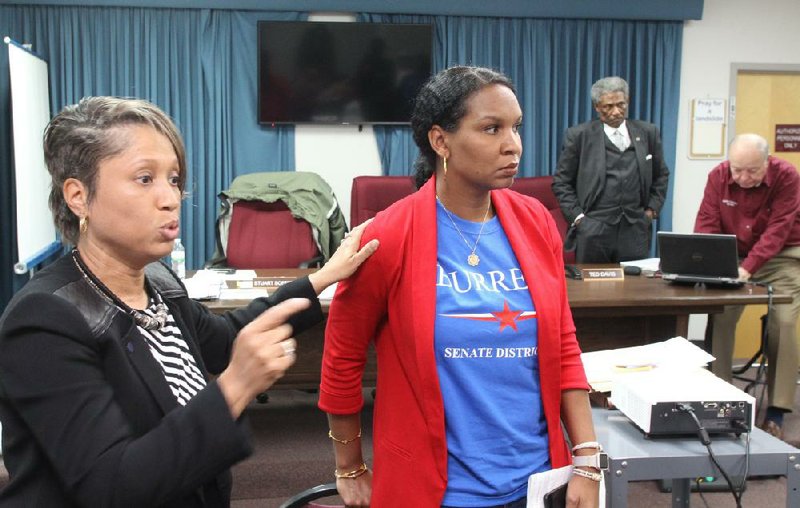 Keidra Burrell (center), a candidate for the District 27 Senate seat in the Democratic primary and her friend Shandra Griffin talk Thursday after a meeting of the Jefferson County Election Commission. Griffin said a friend alerted her by text that the District 27 race was not on her ballot. “That’s what got this whole ball rolling was that one citizen, someone in the know, to say, ‘hey, we have an issue,’” Griffin said. (Arkansas Democrat-Gazette/Dale Ellis)

PINE BLUFF -- A Jefferson County voter discovered the wrong state Senate race on her ballot Thursday morning, prompting the county's Election Commission to determine voting machines in four precincts were misprogrammed and to turn to paper ballots for early voting.

The voter, who was not identified, was set to vote in the Democratic primary race for District 27 state Senate between Pine Bluff attorney Keidra Burrell and former Rep. Garry Smith of Camden, but the ballot that came up had the District 25 race between incumbent Sen. Stephanie Flowers of Pine Bluff and former Rep. Effrem Elliott of White Hall.

The ballot problem in the four Pine Bluff precincts prompted Jefferson County Clerk Shandra Taggart to notify the Jefferson County Election Commission and to have early voters in those precincts begin voting on paper ballots left over from absentee balloting, with the District 25 race marked out and District 27 race included as an attachment.

The commission voted Thursday night to seek the state Board of Election Commissioners' help in determining how to handle the 152 votes that were miscast because of the error.

Election Commissioner Stuart "Stu" Soffer said that Election Systems & Software, the vendor for the iVotronics touch-screen voting machines used by Jefferson County, was notified and began preparing new media to be overnighted so the ballots can be corrected and the machines reprogrammed in time for Election Day.

According to Taggart, 152 people in those precincts had voted early before the error was reported and 15 absentee ballots for the Democratic primary had been mailed out with the incorrect race.

Although Soffer tried to downplay the seriousness of the error, a special meeting Thursday evening had the commissioners, Soffer, Ted Davis, and Chairman Michael Adam, facing a tense, angry group of about 25 people, including Burrell and Elliott, and assorted other candidates, elected officials and concerned citizens.

"What I'd like to know, and I think what everybody else would like to know," said Pine Bluff City Council candidate Glen Brown, "is how did we get here? And I will come back up if I don't get a good answer."

"Human error," Soffer replied. "The four precincts did not correctly migrate to Senate race 27. The work was double-checked, it was double-checked by [Election Systems & Software], and the three commissioners and the administrator sat at this table and tried to verify it. We had 171 precincts and I don't know how many races, so the short answer is human error. If you want to blame someone, blame me."

"Well what can be done about it if we blame you?" Brown asked.

Shandra Griffin, a friend and supporter of Burrell's, told the commission that the problem came to light when she was texted by a friend asking if the District 27 race was on her ballot.

"I told her yes, but she said it was not on her ballot," Griffin said. "I'm working on the campaign, I've verified the mapping, and I knew for sure that District 27 should have been on her ballot. That's what got this whole ball rolling was that one citizen, someone in the know, to say, hey, we have an issue."

"That's the way the system is supposed to work," Soffer said. "But I'm sure there's others who didn't say anything."

"They don't know to say something," Griffin said. "Because they are depending on this commission or whomever to have the correct information when we go to vote. The average person doesn't keep up with District 27 or District 25."

Asked how the ballots that had been voted incorrectly would be handled, Taggart said the 15 people who received incorrect absentee ballots will be mailed corrected ballots, which Soffer said would have until March 13 to be postmarked to the county clerk's office, at which time all the absentee ballots would be counted by hand.

Justice of the Peace Jimmie Fisher asked what the status of the 152 votes cast on incorrect ballots during early voting would be.

"Do they still get credit for those votes?" he asked.

Adam said that while the votes have been cast, they have not yet been counted. But he said, according to his understanding of the law, that when they are counted after the polls close March 3, they will be counted toward the race they were cast in, even though that was in error.

"They will be counted to whatever race they were voted in," he said. "There is no other way."

Gerald Robinson, county judge of Jefferson County, asked who programmed the election. Soffer told him that he and Sven Hipp, the election administrator, did the programming.

"This is exactly why we shouldn't have commissioners programming elections," said Robinson. "It is a conflict."

"It is not a conflict, Judge," Soffer shot back.

"I understand what the law says, that in the absence of a coordinator..." Robinson said.

"I agree with you wholeheartedly," Soffer said. "I don't want to be programming elections which is why I am training Sven Hipp."

"All I'm saying is that by the commissioner doing that," Robinson said, "it does not look good."

"I agree and I don't want to do it but there is no one else to do it," Soffer said.

"You minimize things when it is an error on the commission's part," Robinson said. "But if anybody else does something, you make a big deal of it. Well, this is a big deal."

At that point, Adam cut into the exchange, saying that a number of counties have to depend on election commissioners to program their elections.

"It's not improper," he said. "Somebody has to do it. If we don't have somebody we can train, we don't have that situation and that's what it is."

On the issue of the miscast ballots, Rep. Vivian Flowers, D-Pine Bluff, who is running unopposed for re-election, voiced concern that the people whose votes were miscast, if they are to be counted in the wrong race, would effectively be disenfranchised.

"At this moment, all of those ballots will be counted as they were cast," Adam said.

As the meeting concluded, the commission voted to reprogram the voting machines for the four precincts affected by the error, to give those whose absentee ballots were miscast until March 13 to return the corrected ballots, and to seek legal advice from the state Board of Election Commissioners on how to deal with the 152 miscast early votes.

After the meeting, Elliott, whose District 25 Senate race was affected, said he was still not sure how the mistake happened.

"I just know that people came out in the rain and the cold to vote for the person they want to represent them," he said. "I think those votes should count."

Burrell said she was upset by the conduct of the meeting.

"Stu Soffer seemed bothered by the fact that we were questioning what happened," she said. "It was solely his mistake and he said that in the meeting. ... 152 people voted in this election who were supposed to vote in District 27 and they voted in District 25, so when you throw those votes out you're taking away those people's right to vote in that race, so something needs to happen. And the legal advice should have been had prior to having this meeting."

Burrell said the commissioners seemed ill-prepared and defensive during the hourlong meeting.

"We should have had an informed response for the citizens of this community but instead we got a whole bunch of fluff and a whole bunch of anger from men who were on that commission and didn't want to answer our questions."

In an email Thursday night, Soffer said the commission would seek advice on the legality of not counting the 152 miscast ballots and having the county clerk's office contact the 152 voters from the four precincts to return to the courthouse to vote a paper ballot on the District 27 race only.

He said the commission will also verify if it is legally permissible to allow the extra 10 days for the absentee ballots to be returned.

Soffer also said a notice will be attached to every voting machine advising voters to check their ballot to ensure it is correct before casting their ballot.

The winner of the District 27 Senate race will challenge incumbent Sen. Trent Garner, a Republican from El Dorado. District 27 is made up of Calhoun County and parts of Cleveland, Grant, Jefferson, Ouachita and Union Counties.

The winner of the District 25 race will be unopposed in the Nov. 3 general election. Senate District 25 includes parts of Arkansas, Desha, Jefferson, Lincoln, Monroe and Phillips counties. 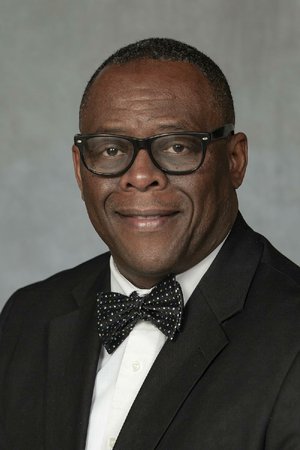 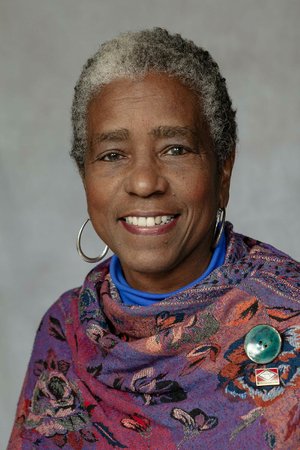 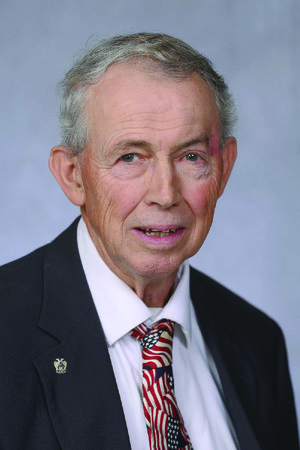