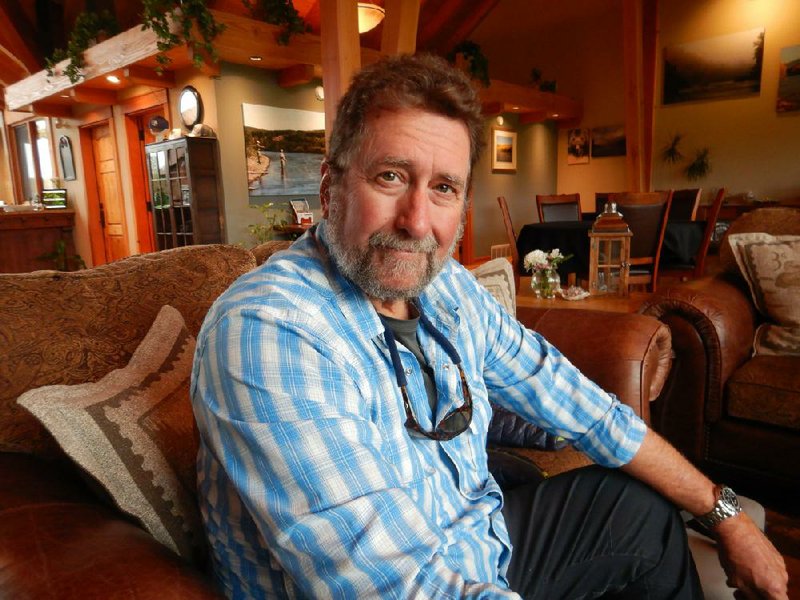 Fraser Heston, son of the iconic actor Charlton Heston, played the infant Moses in the 1956 Cecil B. DeMille epic The Ten Commandments.

In Cecil B. DeMille's 1956 epic The Ten Commandments, the director re-creates some of the most awe-inspiring Biblical miracles including the parting of the Red Sea, the burning bush and the plagues that persuaded Pharaoh to release the Jews from slavery and let them return to Israel.

Another act of divine intervention on the set may have prevented an affliction as horrific as the death of the firstborn. The film starred Charlton Heston as the prophet Moses, who led the Jews to freedom, so it only made sense to cast his son Fraser C. Heston as the baby who would later bring down the tablets from Mt. Sinai.

You can see the miracles come alive again in a new Blu-Ray edition that hits the stores March 10. It includes the Holy Week favorite as well as DeMille's 1923 silent adaptation that weaves a re-creation of Exodus into a contemporary story about two brothers who differ in their adherence to the Commandments.

In his memoir In the Arena, Charlton Heston proudly recalled how calmly his offspring sailed down a make-believe Nile in less-than-watertight basket. The now-grown producer and director recalls how his own journey had dangers of its own.

"I guess when the basket almost sank, it didn't phase me. It turned out they launched me into the backlot of Paramount into the Nile river that they built there. When Dad went to pick me up, the basket was four inches lower than when it started," Heston says and then laughs.

"My career could have ended very early on."

The then-75-year-old DeMille had a mishap of his own. DeMille completed the movie, which would be his last as a director, despite having a heart attack on the set. Like his Biblical heroes, the director wasn't going to let an affliction of the flesh get in the way of his task.

"Talk about a perfectionist," Fraser Heston says. "He wouldn't let it be known he had a heart attack because they might have sent in a replacement director or made an insurance claim and scuttled the whole movie. He said he had some type of stomach ailment and soldiered on at risk to his life and may have shortened his life as C.C. DeMille [Presley], his granddaughter, believes."

Conversely, while DeMille may have pushed himself and the cast and crew hard in his quest to bring the Old Testament alive on the screen, Heston says he and his father admired how DeMille could think big (a then-astronomical $13.2 million budget) without squandering Paramount's resources. The sinking baby basket and DeMille's health problems were the exception, not the rule, on the director's sets.

Heston says, "He was not a profligate spender. He didn't just throw money at [the] screen. He planned meticulously. He had models, drawings. He did meticulous research. He was a perfectionist with the way he made films, and Dad came to love him for that."

In the Name of the Father

While his father left an indelible impression in front of the camera in everything from Ben-Hur and Planet of the Apes to Friends, the younger Heston has made his mark behind the scenes.

Heston wrote The Mountain Men (1980), which starred his father. He later directed his father as Long John Silver in a 1990 TNT adaptation of Treasure Island and as Sherlock Holmes in The Crucifer of Blood the following year. He also produced his father's adaption of Robert Bolt's A Man for All Seasons. More recently, he directed the Netflix documentary The Search for Michael Rockefeller.

"I was thinking about that the other day if I had chosen to be an actor instead of being a writer and ultimately a director. I think I would have had a rewarding career, but I was not really attracted to it. My Mom and Dad tried to talk me out of it. They thought the life of an actor was not all it was cracked up to be. Most are not successful. Dad was very lucky and fortunate," Heston says.

In a radical departure from his cinematic debut, Heston directed the movie version of Stephen King's Needful Things, where Satan opens a shop in Castle Rock, Maine, sowing chaos and bloodshed in the process. The legendary Swedish actor Max Von Sydow, who played Jesus in The Greatest Story Ever Told and the title character in The Exorcist, is Old Scratch.

"There I was an emissary of God in my first film, and the next one was about the Devil," he laughs.

Asked what it was like to direct Von Sydow, who has starred in everything from Ingmar Bergman classics to Star Wars: Episode VII -- The Force Awakens, as well as his father, Heston recalls, "They are very similar actors: They're old school. They come prepared. They read the book. They read the script. They come to you at a time far enough in advance that you can make changes to the script. Max was a delight to work with, as was my Dad."

Heston may have best described what his father did for a living when he was not much older than his only on-screen role. He told adults that Charlton Heston "pretended to be people."

"That's kind of what he said to me. He saw himself as a shy kid from backwoods Michigan who liked to wear tights and wave swords around [and] recite Shakespeare through a funny nose," he says.

So Let It Be Written

While The Ten Commandments has been presented on the small screen practically since Moses himself walked down the mountain with his tablets, DeMille's awe-inspiring images lose much of their power during compression. Having seen the movie in an auditorium with a 50-foot screen, I now understand why Charlton Heston politely told fans "you haven't seen it" when they informed him they had watched The Ten Commandments on TV.

"It's the quintessential epic. When you think spectacle, you think C.B. DeMille. When you think epic, you think The Ten Commandments. It's a great story, isn't it? You should read the Bible. Whatever your religion, it's a fascinating document. It has marvelous stories in it, some of the greatest stories ever told, but you don't get it in such an immediate, visual way as you do on film, and I think that was part of the success of The Ten Commandments," Fraser Heston says.

"It opened up this market for a Bible story in a way that no one else had experienced it."

Fortunately, home-viewing experience has improved exponentially in years since Charlton Heston died. Having seen the new Blu-Ray, both his son and I think DeMille's grand images now look appropriately impressive in a living room.

"This new restoration is amazing," Heston says. "I watched it last night. It looks like you could step into the screen and jump on a chariot and race alongside Pharaoh (Yul Brynner). It's really amazing. They did it in 6K, which is like three times what's normal. If you saw it on your color TV 25 years ago, it's not the same animal at all." 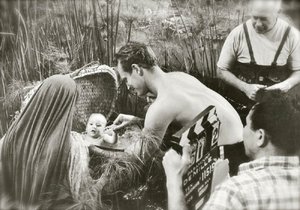 Charlton Heston plays with his infant son, Fraser, on the set of Cecil B. DeMille’s 1956 Biblical epic The Ten Commandments, a new digitally re-mastered version of which is being released next week.