Pence starts in new role; all messaging on virus to go through him 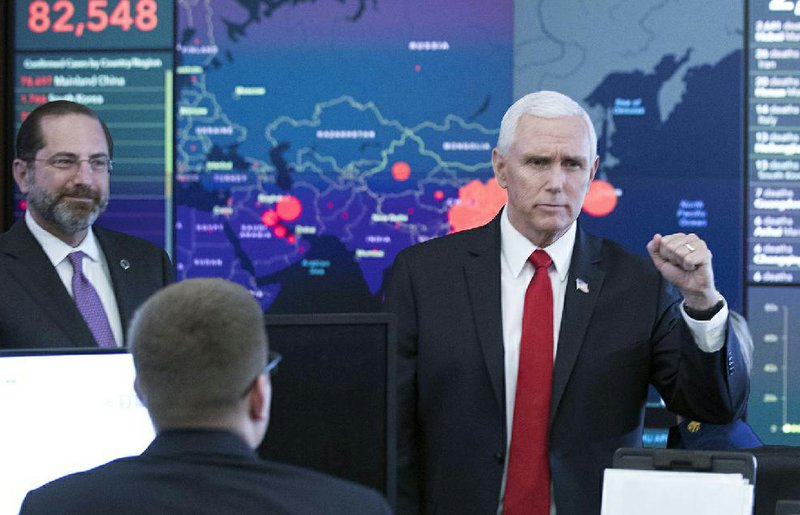 Vice President Mike Pence (center) and Health and Human Services Secretary Alex Azar (left) tour the coronavirus operations center Thursday in Washington after the first meeting of Pence’s task force. A large monitor behind them displays a count of virus cases, deaths and the number of patients who have recovered. More photos at arkansasonline.com/228virus/. (AP/Andrew Harnik)

WASHINGTON -- The White House moved on Thursday to tighten control of the coronavirus messaging by government health officials and scientists, directing them to coordinate all statements and public appearances with the office of Vice President Mike Pence, according to several officials.

Pence convened his first meeting of the coronavirus task force one day after President Donald Trump made him the government's point person for the U.S. response to the virus. Pence also tapped a seasoned medical professional to be his chief adviser and said Trump had "tasked us to take every step necessary to protect the American people."

Until now, acting White House Chief of Staff Mick Mulvaney was responsible for coordinating the response across the government outside of the health care agencies. Facing lawmakers' questions Thursday about the new organizational chart, Human Services Secretary Alex Azar said Pence would now fill that role.

On Capitol Hill, Azar told lawmakers Thursday that he was involved in discussions about Trump's decision to designate Pence. He said he welcomed the heft that the vice president's office brings.

[Video not showing up above? Click here to watch » https://www.youtube.com/watch?v=15XjckAOTwU]

"I'll be honest with you. When I heard the idea that the vice president would be willing to help add the force of his office to this effort, I said, quote, 'That's genius,'" Azar told Rep. Bill Pascrell, D-N.J.

Earlier on Thursday, Pence told the Conservative Political Action Conference in Maryland that "we will continue to bring the full resources of the federal government to bear to protect the American people." Pence said Trump and the administration would work with leaders in both political parties and at the state and local levels.

Officials insist the goal is not to control the content of what subject-matter experts and other officials are saying, but to make sure their efforts are being coordinated, after days of confusion with various administration officials showing up on television.

Pence said on Thursday that he had selected Dr. Deborah Birx, the director of the U.S. effort to combat HIV and AIDS, to serve as the coronavirus response coordinator for the White House, enlisting an experienced scientist and physician to manage the response to the potential spread of the virus.

Dr. Anthony Fauci, one of the country's leading experts on viruses and the director of the National Institute of Allergy and Infectious Diseases, told associates that the White House had instructed him not to say anything else without clearance.

Officials also announced that Pence was expanding the Coronavirus Task Force to include "key administration officials, including Dr. Jerome Adams, the surgeon general, as well as the president's top two economic advisers, Larry Kudlow, director of the National Economic Council, and Steven Mnuchin, the Treasury secretary. The task force comprises more than a dozen top administration officials and Cabinet secretaries.

Speaker Nancy Pelosi told reporters Thursday morning that she had told Pence directly that she questioned his new role given that he had "slashed" the public health budget when he was governor of Indiana.

"I spoke with the vice president this morning, made some of these concerns known to him," she said. "We have always had a very candid relationship and I expressed to him the concern that I had of his being in this position."

But Pence's allies played down the political risks to the vice president and said it was a good idea to put him in charge.

"He's been actively involved already," said Rep. Mark Meadows, R-N.C. "He, with Secretary Azar, have been really engaged for weeks."

Pence said he'd had conversations Wednesday night and Thursday with House and Senate leaders of both parties to discuss funding for the virus response. The administration has requested an additional $2.5 billion, while Senate Democratic leader Charles Schumer of New York countered with an $8.5 billion proposal.

Pence described the conversations as "productive" and "very positive" and said he would look to the task force for guidance on additional funding.

Schumer and Pelosi weighed in with demands, including interest-free loans for small businesses harmed by the outbreak and reimbursements for state and local governments for costs incurred in fighting the coronavirus.

"He's prioritized fighting with the White House over simply letting the appropriators do their work," said Senate Majority Leader Mitch McConnell, R-Ky., of Schumer. "Fortunately, it appears we will have an opportunity to put this cynicism behind us quickly and move forward in a unified way."

"If a Republican president asks for money the Democrats always say it's not enough. And if a Democrat asks for money the Republicans all say it's too much. And they're probably both right," said Sen. Roy Blunt, R-Mo. "In a more functional Congress, we would do something like the president's number and 60 days from now we'd all get together and do a second number once we know more, but we appear to be incapable of that kind of realistic approach to legislating."

The new White House approach came as the Centers for Disease Control and Prevention acknowledged Thursday that a California woman with coronavirus was made to wait days before she was tested for the disease because of the agency's restrictive criteria about who may get tested.

The Solano County woman became the country's first coronavirus case in a patient who neither recently traveled out of the country nor was in contact with someone who did, raising the possibility that the virus is already spreading within the community. There are 60 cases reported in the United States.

Solano County Public Health Officer Dr. Bela Matyas said public health officials have identified dozens of people -- but less than 100 -- who had close contact with the woman. Those people are quarantined in their homes. A few have shown symptoms and are in isolation, Matyas said.

California is working with federal officials to expand the testing of possible coronavirus patients, Gov. Gavin Newsom announced Thursday in a news conference to address the issue.

Despite two communities having declared local emergencies over the outbreak, Newsom said there are currently no plans to declare a statewide emergency.

A total of 33 people have been diagnosed with coronavirus in California, and five have since left the state, Newsom said.

Meanwhile, Facebook said Wednesday that it is banning ads that make false claims about products tied to the new coronavirus.

The ban went into effect this week. Facebook had previously banned ads, along with regular unpaid posts, that peddle fake cures such as drinking bleach, spread conspiracy theories about the virus, or discourage people from seeking medical treatment.

China reported 327 new cases and 44 deaths from the illness, continuing a sharp downward trend in the country where the epidemic began.

More than 3,600 infections with the new type of coronavirus have been reported in other places as the epidemic spreads to dozens of countries. In recent days, the number of new cases outside China has eclipsed the number confirmed inside the country.

Of the newly reported figures, 313 cases and 28 deaths were in Wuhan, the city worst hit by the epidemic.

In Japan, Prime Minister Shinzo Abe asked all elementary, middle and high schools nationwide on Thursday to close until late March to help control the spread of the virus.

It will affect 12.8 million students at about 34,800 schools nationwide, according to the Education Ministry.

The decision comes amid growing concern about the rise in the number of untraceable cases of the virus in northern Japan and elsewhere. Japan now has more than 910 cases, including 705 from a quarantined cruise ship. An eighth death from the virus was confirmed Thursday on the northern island of Hokkaido.

The Japanese government has also asked companies to allow employees to work flexible hours or work from home to reduce infection risks.

In South Korea, where the military called off joint drills planned with American troops, there were 256 new cases reported today , for a total of 2,022 cases. South Korea toughened penalties for those breaking quarantines.

Saudi Arabia cut travel to Islam's holiest sites. The holy city of Mecca, which able-bodied Muslims are called to visit at least once in their lives, and the Prophet Muhammad's mosque in Medina were cut off to potentially millions of pilgrims, with Saudi Arabia making the extraordinary decision to stop the spread of the virus.

Airports across Latin America looked for signs of sick passengers Thursday as the new virus troubled a mushrooming swath of the globe.

In Iran, the front line of Mideast infections, the caseload surged by more than 100. Officials loosened rules barring the import of many foreign-made items to allow in sanitizers, face masks and other necessities, and removed overhead handles on Tehran's subways to eliminate another source of germs.

Peru put specialists on round-the-clock shifts at its biggest airport, Argentina took the temperature of some new arrivals and El Salvador added bans for travelers from Italy and South Korea.

The Dominican Republic turned back a cruise ship carrying 1,500 people because eight of those aboard showed potential symptoms of the virus. And in Africa, South Africa's president ordered the evacuation of citizens from the Chinese city of Wuhan, where the virus outbreak began.

Even the farthest reaches of the globe were touched by the epidemic, with a woman testing positive in Tromsoe, a Norwegian city surrounded by mountains. Health officials said the woman had traveled to China.

The global count of those sickened by the virus hovers around 82,000. 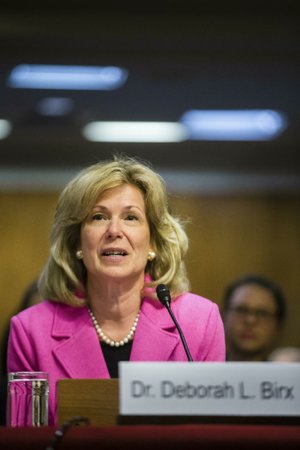