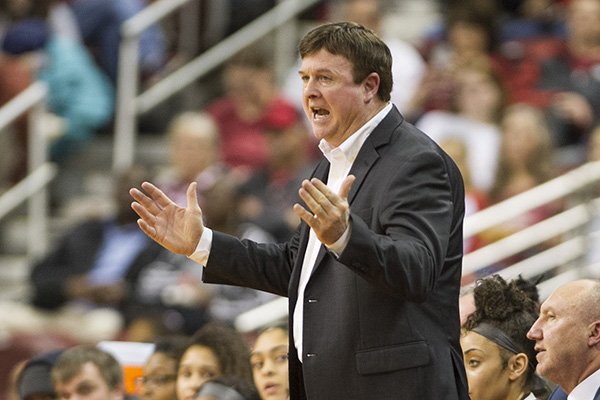 As the calendar prepares to turn from February to March, how a team is playing during this stage can dictate a lot.

It's no secret this is the time of year when college basketball teams want to be peaking.

Both the University of Arkansas at Little Rock and Arkansas State University women's teams can't say that as of late, though. As the in-state rivals head into tonight's meeting in Jonesboro -- a rematch from UALR's 67-58 victory in Little Rock back on Jan. 18 -- the Red Wolves (9-17, 6-9 Sun Belt Conference) have dropped six games in a row, while the Trojans (11-15, 9-6) have won just one of their past five.

The aforementioned UALR victory was in its last outing Saturday in Mobile, Ala. -- a 69-58 victory over South Alabama that finally ended a four-game losing streak. Perhaps equally as important, UALR Coach Joe Foley reached the 800 career victories mark, previously something that only 12 coaches all time, including six active, had achieved in NCAA Division I women's basketball.

But to Foley, No. 801 is just as meaningful as No. 800, as the Trojans, who sit in fourth in the Sun Belt standings, seek to maintain that position over the final three games of the regular season. The third and fourth seeds in the conference tournament have homecourt advantage in the first round, and should they advance to the quarterfinals, they'd again host.

"Like we said early in the year, I just would hope everything would come together at the end. Hopefully it will," Foley said. "If we play like we did [Saturday], I'd feel really good. But the four games before that, I didn't feel really solid about it.

"It's still kind of 'which team are we?' and that's kind of what the next two weeks [are] about. If we keep playing like we played [Saturday], it's gonna be a lot of fun."

Foley is adamant he's glad he doesn't have to talk about No. 800 anymore. But plenty of others have taken notice.

ASU Coach Matt Daniel, who's known Foley for years, heaped praise on his counterpart this week.

"Knowing Coach the way I [do], he's just coaching the game. The records and all the things that he's done along his career, those speak for itself," Daniel said. "He's just done a great job everywhere he's been. He's built a program that's built to win and built to last."

Foley, however, recently lost a key player from his rotation.

Freshman forward Nicole Hemphill is expected to be done for the season with a knee injury, which she suffered in the second half of UALR's 77-59 loss at Troy last Thursday. Hemphill -- who had already missed significant time earlier this season with an ankle injury -- was averaging 3.4 points, 4.0 rebounds and 19.9 minutes per game and had six starts.

With Hemphill out -- coupled with junior forward Krystan Vornes' suspension for a violation of team rules -- it opens the door significantly for more playing time for Angelique Francis. Vornes hasn't played since Jan. 25.

Francis was effective in just her third-career start Saturday against South Alabama, tallying 9 points and 5 rebounds in 23 minutes before fouling out.

"She did a good job. I was pleasantly surprised," Foley said. "Very good athlete, but she's struggling with some of the things we're trying to do, as any freshman would be. But she had a good effort, and I knew she would do that."

For the Red Wolves, Daniel said his team isn't currently dealing with any major injuries, but there's been plenty of other issues as of late, as ASU has fallen into the bottom half of the Sun Belt standings and is scrapping to just make the conference tournament.

ASU has lost by double digits in each game during its six-game losing skid, while opposing teams have averaged 80.8 points per game during that stretch.

Daniel said his team needs to be more efficient and play harder, but he also a grasp of the big picture as his first season at ASU winds down.

"We didn't expect to come in and win six in a row," Daniel said. "Depending on who you ask, we've won more games than some people thought we would. We're just still trying to continue to build the culture the way it needs to be moving forward and win as many games as possible and trying everything we can to send the seniors off the right way. They've had a career full of struggles.

"I didn't expect to come in here and be the magic pill that turns it around overnight. I don't think anything that's worthwhile will be turned around overnight. Those are one-hit wonders, and that's not what we're looking for." 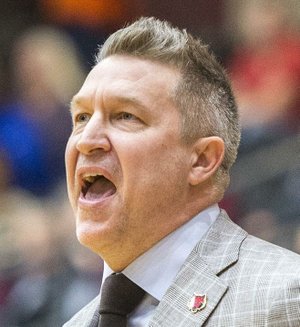 In this file photo ASU head coach Matt Daniel is shown during a game at the Jack Stephens Center in Little Rock on January 18, 2020. (Arkansas Democrat-Gazette/Jeff Gammons)