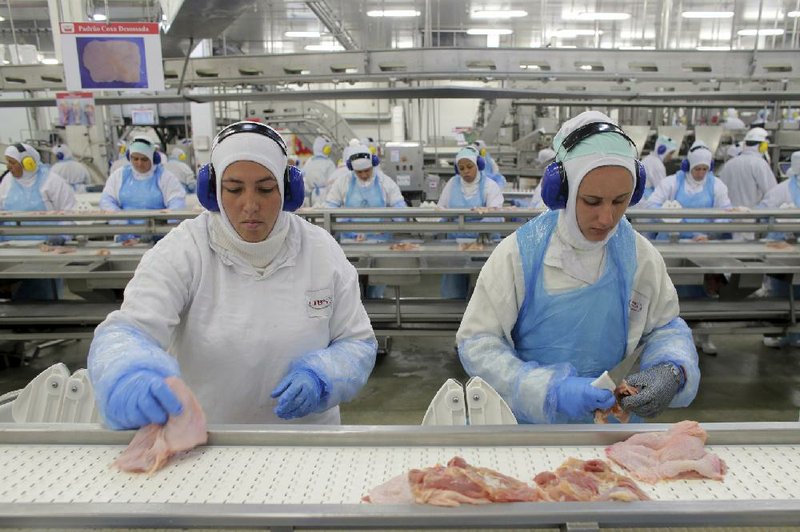 A JBS meatpacking facility in Lapa, Brazil, is shown in 2017, the year in which the U.S. suspended imports of all fresh beef from Brazil after rotten or contaminated meats were found at several plants. (AP/Eraldo Peres)

Brazilian beef, priced about 30% less than domestic meats, has U.S. ranchers and industry groups concerned with a recent ruling that lifts an import ban.

The U.S. Department of Agriculture said this week that Brazilian beef roasts and steaks are eligible for sale in the U.S. market, ending a ban imposed after reports of bribery involving Brazil's meat inspectors. Ground beef and fine carcass trim products are not eligible.

"To me it's almost like a slap in the face," said Michael Lee of Faulkner County. He has been raising cattle on his Flying C Ranch for some 20 years.

"American farmers bust their butts to produce that good product, and we all eat it ourselves," he said. "So why would we give a bad product to people?"

The USDA suspended imports of all fresh beef from Brazil in 2017 because of "recurring concerns about the safety of the products intended for the American market," Agriculture Secretary Sonny Perdue announced on June 22, 2017. In the months preceding, Brazilian police had raided several meatpacking plants and found evidence of them bribing inspectors and politicians to overlook rotted or contaminated meats, media outlets reported. Brazil is the largest beef exporter in the world, shipping products to China, Russia, the U.S. and others.

Since the ban, the USDA has allowed some meat exports from Brazil such as raw pork, beef extracts and cooked products to enter the country. After the completion of an audit of Brazil's inspection system, the USDA's Food Safety and Inspection Service determined that raw beef is safe for entry. Raw beef processed before Feb. 21 is not eligible, the agency said in a notice on Monday.

A mix of reactions, mostly negative, came from ranchers and industry groups concerned with the safety of Brazil's beef and where it could end up in the U.S. supply chain.

"I would like to be positive and open, but am very skeptical," Lee said.

U.S. beef is held to a higher standard compared with other countries, he said. "What concerns me about Brazil is that I have no idea what their regulations are. ... I don't know if it's an even playing field."

The National Cattlemen's Beef Association issued a statement after the USDA's announcement, addressing concerns such as Brazil's history of food-safety violations and foot-and-mouth disease. There also remains concern about the use of "Product of USA" labels on beef sold in America, the association said. The USDA has come under scrutiny for allowing imported beef to carry the label under condition of it being processed in the United States.

"Potentially there could be an issue there," about labeling practices, said Scott Clawson, a farm economist with Oklahoma State University's extension service. Historically, the United States has been a small importer of Brazilian beef, mostly precooked specialty items. "Not generally something you'd see at a retailer," he said.

Low commodity prices and high input costs at a time of high domestic supply make the timing of the USDA's decision a concern, Clawson said. Those Brazilian imports "certainly will not help prices."

Tariffs, or taxes on imported goods, limit the supply of foreign beef entering the U.S. Countries such as Australia and New Zealand can ship only so much beef to the U.S. before a more than 20% duty is added to their product prices, government reports show. Canada and Mexico are exceptions under the continent's trilateral trade deal. Overall, imports account for less than 15% of the U.S. beef supply.

Because there is no formal U.S. trade agreement with Brazil, the South American country falls into the "other" category in the USDA's tariff structure for beef. Those "other" countries can export 64,000 tons of beef to the United States before a 26.4% duty is added, discouraging foreign meatpackers from exporting an excessive amount.

They could ship more but, with the added costs, "who is going to buy it?" said Travis Justice, chief economist of the Arkansas Farm Bureau.

In 2015, the USDA reported that countries in the "other" category fulfilled about 68% of its tariff-rate quota. Australia, by comparison that year, fulfilled 99% of its quota, which was 418,214 tons. That is 85% more than "other" countries are allotted before a higher tariff rate kicks in.

Brazil's imports have never been a big market mover, Clawson said, "so there's no reason to assume it will be different now."

R-CALF USA, a lobbying group for cattle producers, said Thursday that Brazil spends about $1.2 billion in subsidies for cattle production, which helps keep prices of exported Brazilian beef about 33% below the cost of U.S. beef.

"This is not a level playing field," R-CALF chief executive Bill Bullard stated in a news release.

The Brazilian raw beef entering the United States will mostly be used for food-service purposes such as fast-food burgers, and probably won't show up in the retail meat case, Justice said.

"The amount of product coming from Brazil is not going to be much, but a lot of those imported products are a way to add value to products we produce," he said. Historically, manufacturers have combined imported lean trim with U.S. fat trim for burgers.

"Some would say it competes with the industry, but it complements, too."