Packing in the pews 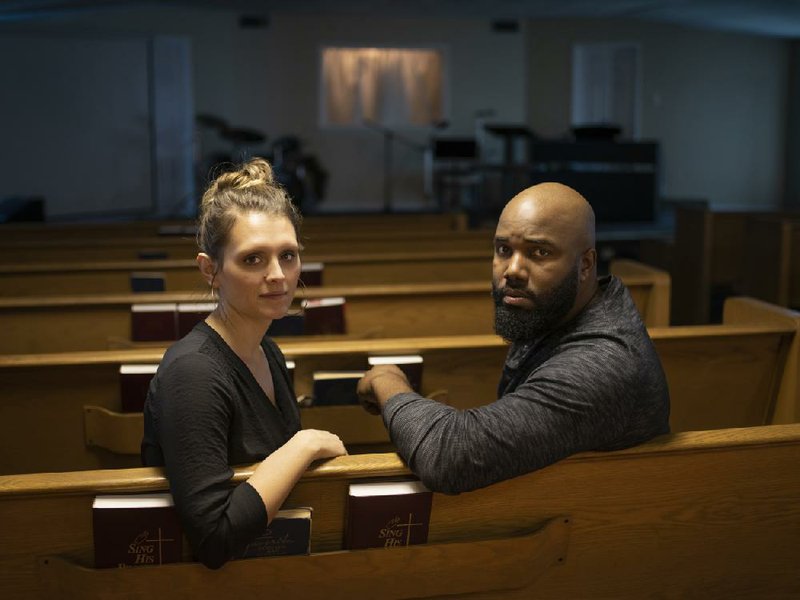 Pastor Noah Tillman-Young, 34, and his wife and fellow pastor, Allison Tillman-Young, 35, sit in the main worship hall at Joyful Heart Church in Stockdale, Texas. After the fatal church shooting in nearby Sutherland Springs in 2017, members of Joyful Heart volunteered to carry concealed handguns during services. (The Washington Post/Matthew Busch)

Sunday services had just ended, but Noah Tillman-Young called his small congregation back for another prayer. Shots had been fired at a rural church just down the road -- a church a lot like theirs.

As his 30-some parishioners stood in a circle asking God for protection, something changed for the pastor of Joyful Heart. An act of mass violence in his Stockdale, Texas, church was no longer unthinkable. Ten miles away, 26 people were dead at First Baptist Church in Sutherland Springs, the deadliest shooting at a house of worship in the country's modern history.

That night, Tillman-Young and parish leaders held a vigil for their neighbor church. The next day, they decided to arm their own.

"It's nothing you ever imagine could happen, but when it hits so close to home, you have no choice -- you can't ignore it and you have to prepare," Tillman-Young said. "It's the reality that houses of worship are increasingly becoming targets."

With a new team of private security officers and an armed corps of volunteers, Joyful Heart joined the wave of small and midsize places of worship adopting security measures to gird against the rising threat of violent attacks.

While there is no definitive tracking of shootings or other attacks on houses of worship, several researchers and the federal government have documented a significant rise in targeted acts -- particularly those with high death tolls.

FBI statistics show a 35% increase in hate crimes at churches, synagogues, temples and mosques from 2014-18, the most recent year for which data are available. The nonprofit Faith Based Security Network found a 60% increase in "nonaccidental deaths" at such sites from 2014-17. And of the 88 people killed in mass shootings at places of worship since 1966 -- defined as incidents in which four or more people were killed -- more than half the deaths came in the last five years, according to the mass shootings database of The Washington Post.

This increase has prompted several state legislatures to write or revise firearm laws to make it easier for people to carry guns in houses of worship.

Since the Sutherland Springs shooting in November 2017, lawmakers in 14 states have introduced 40 bills, according to a Post analysis using Quorum, a database of state and federal legislation. Several are still being debated and six have been enacted, from Louisiana to North Dakota.

In the first weeks of 2020, legislators, most of them Republicans, have introduced 13 bills allowing armed security in places of worship. The flurry of lawmaking began just days after a gunman killed two people in late December at a church in White Settlement, Texas, before an armed volunteer shot and killed him. The volunteer's action won praise for a state law that allows parishioners to carry firearms.

Laws under consideration in Florida and Missouri would allow anyone with a concealed-carry permit to take a firearm into a religious building. In New Jersey, a proposed law would allow houses of worship to select one person to carry a handgun for security. And in Virginia, Republicans have introduced four bills to repeal a law that bars the carrying of weapons in a place of worship "without good and sufficient reason."

Experts say that churches, synagogues and mosques, with their typically welcoming environments and looser safety measures, can make for easier targets, especially as businesses and schools increase security. But more places of worship are turning to surveillance equipment and armed guards, especially volunteers from the congregation, who blend in and save the parish money, said Carl Chinn, president of the Faith Based Security Network.

Chinn and other security consultants said they're getting more inquiries from nervous congregations. Business is always busier after a shooting, and Chinn said recent incidents were "a wake-up call."

Gun-control advocates balk at the idea that more weapons will create safer spaces, and others suggest that armed security -- especially volunteers -- could actually bring more risk.

"Whenever firearms are present, there's always room for error and the possibility that the guns which are intended to protect become liable to endanger," said James Densley, a criminal justice professor at Metropolitan State University in Minnesota. "Arming parishioners so they can make the kind of split-second decisions that police get wrong worries me a little bit."

Security teams can minimize the risks by training often and schooling themselves in more than firearm marksmanship, said Steve Padin, a retired police officer who is a chief consultant for the Watchman's Academy, a church security firm.

The volunteers that Padin sees, mostly men, often have a background in the military or law enforcement. And when they don't, Padin said, they need to learn to think as those who do.

A well-trained security guard should be versed in de-escalation and disarming tactics, be able to recognize suspicious behavior and be ready to act quickly, said Padin, who travels the country training security teams at churches and synagogues.

"You should not get to the point where you have to use a firearm," he said.

At Beth Tikkun Messianic Fellowship in Akron, Ohio, Vic Agosta and his small team of volunteer security guards huddle outside the sanctuary before Saturday services. They all carry guns, and every weekend they pray they won't need to use them.

Agosta helped form the team eight years ago when the congregation of 200 was growing quickly. Agosta, who is a lineman for a power company, doesn't have a background in law enforcement or the military as do some of his fellow volunteers. But he does have family in the pews, including a daughter with cerebral palsy who uses a wheelchair.

"Just the thought of someone coming into a service of ours and opening fire on us," he said. "My daughter couldn't run for cover."

Outside New York, which has its own gun laws, New York state has no laws prohibiting firearms in places of worship. And parishioners are better off for it, said Jim Woods, the head of security at the nondenominational Frontier Church near Niagara Falls. He's one of 10 volunteers who greets newcomers at the door, keeps an eye on the parking lot and carries a weapon.

"Years ago, it wouldn't even have crossed my mind [that] you would need to defend yourself in church," Woods said.

One of the most notorious attacks at a place of worship was the 1963 bombing of the 16th Street Baptist Church in Birmingham, Ala., where Ku Klux Klan members detonated dynamite, killing four children and injuring 22 people.

Since then, attacks at places of worship have been divided into two categories: hate-fueled assaults and those related to domestic violence. Both types are increasing in frequency and deadliness, said Densley, who also co-founded the Violence Project, which tracks mass shootings.

In 2012, a neo-Nazi killed six people at the Sikh Temple of Wisconsin, south of Milwaukee. Three years later, a white supremacist hoping to start a race war killed nine at Charleston's Emanuel African Methodist Episcopal Church. And in 2018, anti-Semitic online screeds were connected to the man accused of bursting into the Tree of Life synagogue in Pittsburgh and killing 11.

These were some of the deadliest and most high-profile shootings at American houses of worship. But more common are shootings that are extensions of intimate-partner violence or domestic disputes, such as the massacre in Sutherland Springs. In those cases, Densley said, the shooter is usually a member of the congregation.

"We're often afraid of the stuff we don't know and don't understand that's outside of us when really the biggest risk is right in front of us," he said.

At Joyful Heart Church, the new security measures have also inspired Tillman-Young to look inward, to spend more time getting to know his members and their families.

"When you're in the community, you see those red flags, and you see them before they come to a head and get ugly," he said. "That kind of intentional connection, that relationship, showing people love -- it helps to prevent that kind of stuff."

But more than looser gun laws and armed guards, Tillman-Young said it's his faith that makes him feel safe.

"We're packing," he said, "but we're also packing the power of God and trusting in God to keep us protected." 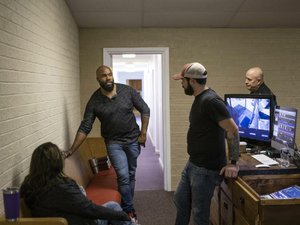 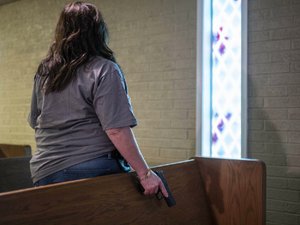 A member of the congregation at Joyful Heart poses for a portrait with her handgun inside the church. (The Washington Post/Matthew Busch)

Print Headline: Packing in the pews