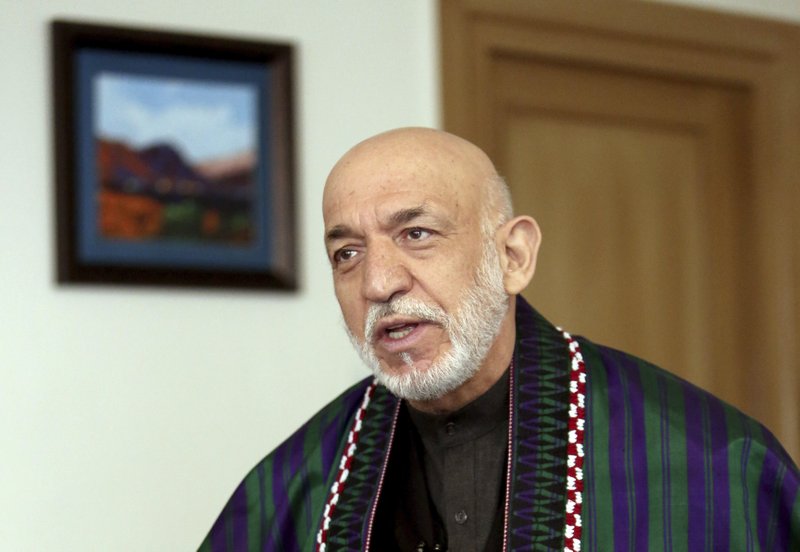 Hamid Karzai, former Afghan president, on Friday in an interview with The Associated Press in Kabul, Afghanistan, thanked Americans for their generosity but had harsh words for the U.S. government and military. (AP/Tamana Sarwary)

WASHINGTON -- The United States and the Islamists it toppled from power in Afghanistan are poised to sign a peace deal today after a conflict that outlasted two U.S. presidents.

More than 18 years since President George W. Bush ordered bombing in response to the Sept. 11, 2001, attacks in America, the agreement will set the stage for the withdrawal of U.S. troops.

In Doha, the Qatari capital, America's top diplomat will stand with leaders of the Taliban, Afghanistan's former rulers who harbored Osama bin Laden and his al-Qaida network as they plotted, and then celebrated, the hijackings of four airliners that were crashed into the World Trade Center towers in lower Manhattan, the Pentagon and a field in western Pennsylvania, killing almost 3,000 people.

The "reduction in violence" seven-day period that led up to today's peace deal signing began at midnight last Saturday. U.S. and Afghan officials wondered whether the Taliban would keep their end of the deal, but then a rocket crashed into a fire station at Bagram air base within the first hour of the move.

That was followed by dozens of other attacks across the country in the past week, including Taliban ambushes that killed at least six people in the northern province of Balkh.

Afghan officials said violence was down about 80% nationwide. But the attacks prompted Army Gen. Austin "Scott" Miller, the top U.S. commander in Afghanistan, to direct his staff to speak to Taliban leaders about restraining their fighters.

"The message that I passed is that if they can't get that under control, we're going to start shooting," Miller said in a staff meeting, referring to the situation in Balkh. "That's a very tough decision if we have the opportunity to end violence."

The rocket at Bagram was "pretty close to hitting coalition" members, he added, something that "would be one of the red lines that is hard to come back from despite all the work."

In Balkh, where attacks caught U.S. attention, it is believed that a Taliban commander was operating without the approval of his leaders, said one senior U.S. military official, speaking on the condition of anonymity because of the sensitivity of the issue. The commander needed to "pick up his game" and meet the terms of the seven-day deal, a message that was relayed to Taliban leaders overseeing him, the senior U.S. official said.

"In terms of what I've seen, I'm satisfied that the Taliban made a good-faith effort," Miller said, speaking in his office in Kabul. "The violence we have seen is sporadic. In some cases, it appears to be harassing, although there have been a couple of fatalities associated with violence -- and those are things that we will talk to the Taliban about directly."

On Friday in Washington, President Donald Trump announced that Secretary of State Mike Pompeo will witness a signing of the agreement with the Taliban while Defense Secretary Mark Esper issues a joint declaration with the government of Afghanistan.

U.S. troops are to be reduced to 8,600 from about 13,000 in the weeks after today's signing. Further drawdowns are to depend on the Taliban meeting certain counterterrorism conditions, compliance that will be assessed by the United States. But officials say soldiers will be coming home.

Trump, as he seeks reelection this year, is looking to make good on his campaign promise to bring troops home from the Middle East.

Trump was close to signing a deal with the Taliban in September at Camp David but canceled after the Taliban claimed responsibility for a suicide bombing in Kabul that killed a U.S. soldier, Sgt. 1st Class Elis Angel Barreto Ortiz, and about a dozen other people.

But he has since been supportive of the talks led by his special envoy, Zalmay Khalilzad.

In a statement released by the White House, Trump said Friday that if the Taliban and Afghan governments live up to the commitments in the agreement, "we will have a powerful path forward to end the war in Afghanistan and bring our troops home,"

"These commitments represent an important step to a lasting peace in a new Afghanistan, free from al-Qaida, ISIS and any other terrorist group that would seek to bring us harm," Trump said.

Under the agreement, the Taliban promise not to let extremists use the country as a staging ground for attacking the U.S. or its allies. But U.S. officials are reluctant to trust the Taliban to fulfill their obligations.

In Washington, a group of Republican lawmakers sent a letter to Esper and Pompeo on Wednesday raising alarm about the plan.

The lawmakers included Afghanistan veterans Michael Waltz of Florida and Dan Crenshaw of Texas, a Navy SEAL who was wounded there. They highlighted the Taliban's bloody history and questioned whether the militants will meet their obligations in the agreement.

"They will accept nothing less than a full-scale U.S. withdrawal from Afghanistan as they seek to establish their 'Islamic Emirate,' " the lawmakers wrote. "Our withdrawal would then allow terrorist groups in Afghanistan to grow stronger and establish safe havens from which to plot attacks against us."

Rep. Liz Cheney of Wyoming led 21 Republican legislators in demanding that the administration not concede anything to the Taliban that would allow them to once again harbor those who seek to harm U.S. citizens and interests. Cheney, the daughter of former President Bush's vice president, Dick Cheney, urged Pompeo and Esper in a letter to reject any commitment to a full withdrawal of American troops.

In a sign of "the international community's commitment to Afghanistan," a separate ceremony will be held today in the Afghan capital, Kabul, with Esper and NATO Secretary-General Jens Stoltenberg, said Sediq Sediqqui, spokesman for Afghan President Ashraf Ghani.

Prospects for Afghanistan's future are uncertain. The agreement sets the stage for peace talks involving Afghan factions. Under the agreement, 5,000 Taliban are to be released from Afghan-run jails, but it's not known if the Afghan government will do that. There are also questions about whether Taliban fighters loyal to various warlords will be willing to disarm.

On Friday, former Afghan President Hamid Karzai welcomed the signing of the agreement, thanked Americans for their generosity, but had harsh words for the U.S. government and military.

"To the American people our message is we are grateful for the help that you gave us in areas where there has been a lot of improvement in Afghan society, together with the rest of the international community," Karzai told The Associated Press in an interview Friday in Kabul. "We understand and respect and admire your good intentions towards us."

"So 18 years on, we have mixed feelings of gratitude to the international community for providing the taxpayers' money to Afghanistan and one of anger at the way we were treated as a people," Karzai said.

"We we must begin to put our own house in order. We must begin to sit down and talk with one another and find the best ways for our country's future stability and prosperity," said Karzai. "With U.S. forces leaving Afghanistan, we, the Afghan people must see it as an opportunity for us to take responsibility for our own country and to make it better and to live by our own means."

Information for this article was contributed by Matthew Lee and Kathy Gannon of The Associated Press and by Dan Lamothe of The Washington Post.