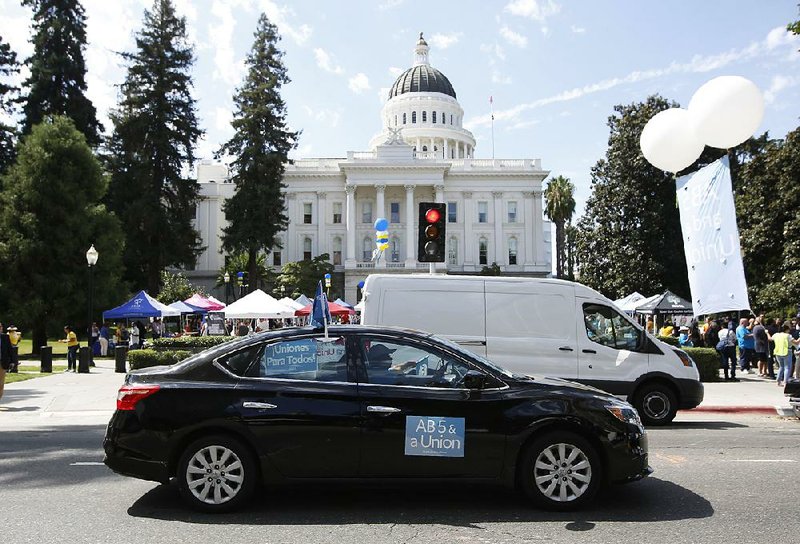 Supporters of a measure that limits when companies can label workers as independent contractors circle the state Capitol during an August rally in Sacramento, Calif. (AP/Rich Pedroncelli)

She moved to San Diego from Peru in 2005 and has a bustling career as an interpreter and translator for doctors, courts and conferences.

Now, as a new California law governing freelancers is set to take effect today, her clients are wary. They are asking for more paperwork. Some services are hitting pause on hiring Californians at all.

"Everyone's scared in California," Rivera, 42, said. "Who's going to hire me as an employee for three assignments a month?"

The new law, Assembly Bill 5, will radically reshape freelance work in California. Prompted in part by frustration with the treatment of workers by companies like the ride-hailing behemoths Uber and Lyft, the bill was created to extend workplace legal protections to roughly 1 million people in the state.

On Monday, Uber and Postmates filed a lawsuit in federal court in California seeking to block the law from being enforced against them. But the suit is unlikely to stop the law from going into effect in other professions.

Those other industries include a wide variety of freelance workers, such as writers, translators, strippers and clergy. Many said they were now discovering that the law could make earning a living much more difficult.

The idea behind the law, signed in September, is that many workers are misclassified as contractors so companies can save money. Unlike contractors, employees are protected by minimum-wage and overtime rules, and are entitled to workers' compensation and unemployment insurance. Their employers pay half their payroll taxes for Social Security and Medicare.

Assembly Bill 5 codified and extended the reach of a 2018 state Supreme Court ruling that said workers must be classified as employees if the work they did was a regular part of the company's business. Under the ruling, a plumber who fixes a leak at a store may be a legitimate contractor. But workers who sew dresses at home using cloth and patterns provided by the manufacturer are likely to be employees.

The new law also means a company must treat workers as employees if it controls how they do their work, or if the workers don't run independent businesses in the same line of work that they do for the company. A plumber who worked only at the store would most likely be deemed an employee.

The law has a host of so-called carve-outs. It exempts certain white-collar workers like doctors and accountants, but it extends legal protections to tens of thousands of low-paid workers in fields like construction, janitorial services and hairstyling.

But complexities cropped up quickly. For example, marketers and grant writers were exempted, but journalists were not.

So a weekly columnist for a newspaper must now be considered an employee, since under the new law a freelance writer can publish only 35 so-called submissions a year with a publication. (A video and a text article on the same event would count as one.) The intention was to require newspapers to put these workers on the staff. The result in some cases has been layoffs.

Vox Media cut more than 200 California freelancers, citing the new law. The transcription service Rev told its freelancers that it would be leaving California.

Emma Gallegos, 34, has been freelancing while saving money to start a local news website, Hwy 99, covering her hometown, Bakersfield, located in California's agricultural heartland. She recently took a copy-editing test to get a significant contract that would help pay her bills. Afterward, the potential client emailed her, apologizing and explaining that it would not be able to hire her because she lived in California.

"There aren't many full-time writing jobs in Bakersfield, so these kinds of remote editing contracts are important for me," Gallegos said. "I just feel really frustrated and like I'm getting set back from my goals."

Proponents of the new law argue that many companies are playing on worker anxieties and that many of the arrangements that employers are abandoning were illegal even before Assembly Bill 5.

"A lot of these employers are sending out these fearmongering emails," said Assemblywoman Lorena Gonzalez of San Diego, the bill's author. "I guess in this day and age of Twitter, that's an easy thing to do -- create a kind of mass hysteria."

Gonzalez, a progressive Democrat, has in recent weeks become a fierce Twitter presence pushing back at critics, sometimes with profanity.

When asked about some of Gonzalez's tweets, a spokeswoman said by email: "The assemblywoman is incredibly angry at an economic system that has caused a permanent underclass in her community of working men and women who are constantly being squeezed by corporate greed."

Gonzalez has said the problems facing companies that rely on freelancers preceded the new law.

SB Nation, the sports website owned by Vox Media, which cited Assembly Bill 5 as the reason it recently let go about 200 freelancers, was already sued by freelancers before the law changed. In one lawsuit, freelancers claimed that they worked as many as 40 hours a week but earned less than $150 a month.

A spokeswoman for Vox Media declined to comment but cited a post from SB Nation's executive director in which he said the change was also "part of a business and staffing strategy that we have been exploring over the past two years."

Even in situations where the new law might hurt workers, Gonzalez said, the reality is more nuanced than opponents let on. She pointed out that some media outlets, including SB Nation and the Los Angeles Times, were hiring more employees because of the new law.

While acknowledging concerns among journalists, Gonzalez attributed the media angst over the law partly to journalistic ethics: Those who lose their jobs feel free to complain loudly.

Some freelancers said the new law would force them to change the way they worked. Some said they preferred or needed their flexible schedules. Many companies limit their employees' flexibility for practical reasons, though there is nothing that requires them to impose a rigid schedule.

Nancy Depper, a copy editor and proofreader in Oakland, has multiple sclerosis. So "setting my own hours makes life infinitely better for all the reasons," she said. She said she had lost a set of contracts for 2020 worth $120,000.

The politics of the bill were messy. There was significant support on the left for regulating Uber and Lyft, which use incentives to encourage drivers to work when and where the companies need them while avoiding any of the protections offered by employment. Gonzalez focused partly on those companies.

But many of those who could end up losing freelance work consider themselves progressives, so it has been confusing to find themselves disagreeing with a progressive lawmaker over a union-backed law.

Vanessa McGrady, a writer in Los Angeles who runs a feminist clothing brand, planned to volunteer for Sen. Elizabeth Warren's presidential campaign next year. But then Warren endorsed Assembly Bill 5. Now McGrady, who is anxious about how the law will affect her career, is conflicted.

"I feel so strongly that workers need protection," McGrady said. "But this bill is killing cockroaches with a cannon."