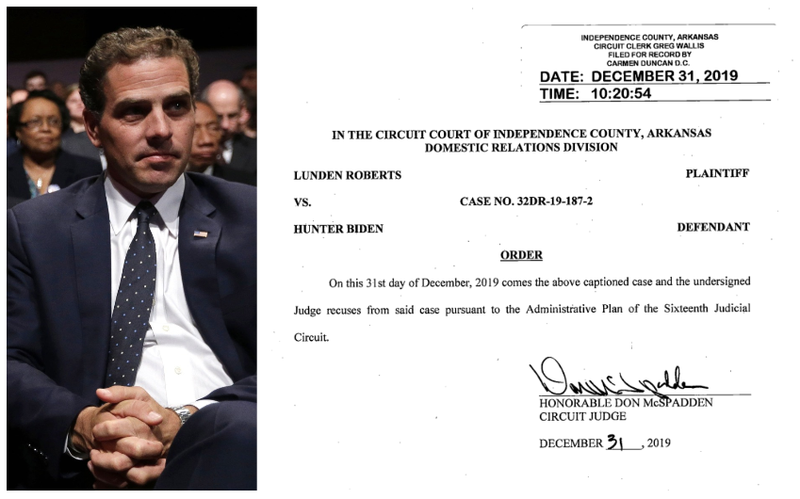 At left, Hunter Biden is shown in a 2012 file photo. At right, a screenshot of a judge's order recusing from an ongoing paternity case involving Biden.

The judge in Hunter Biden's Arkansas paternity case recused without explanation Tuesday, after men in Florida and Israel tried to intervene in the case in apparent attempts to get financial information on the former vice president's son.

Independence County Circuit Judge Don McSpadden has also been trying to get financial information from Biden, but the judge has said his interest was in the well-being of 1-year-old "Baby Doe," the child of Biden and Lunden Alexis Roberts of Independence County.

Potential intervenors Dominic Casey of D&A Investigations Inc. of Longwood, Fla., and Joel Caplan of Jerusalem appear to have other motives.

Casey, a private investigator, filed what he called a "Notice of Fraud and Counterfeiting and Production of Evidence" on Dec. 23. It was stricken from the record that same day by McSpadden, who noted that Casey hadn't filed a motion to intervene.

Casey filed a motion to intervene on Dec. 27, but McSpadden recused before ruling on it.

Brent M. Langdon of Texarkana, Texas, Roberts' attorney, filed a motion Monday saying Casey's filing was "a scheme by a non-party simply to make scandalous allegations" that have nothing to do with the pending paternity suit.

On Monday, Caplan filed a 31-page motion to intervene, saying he represents himself and hundreds of thousands of U.S. investors who were defrauded in a "systemic, formulaic and Biblically-sized multi-billion dollar stock scheme" he called "The China Hustle."

In his argument, Caplan said he was trying to get some of the same financial information that had been sought, so far unsuccessfully, by Roberts' attorney, Clinton Lancaster of Benton.

Lancaster has received some financial information from Biden, but not "full and complete tax returns for any of the past five years," his 2017 and 2018 personal tax returns and other documents showing income, according to a court filing.

McSpadden had ordered all income records of Biden and Roberts over the past five years. The judge also ordered that the financial information be under seal, available to attorneys in the case but not to the public.

Hunter Biden's business connections in Ukraine and China have been criticized by Republicans during the impeachment inquiry into President Donald Trump. Hunter Biden's foreign business activities coincided with the time his father -- Democratic presidential candidate Joe Biden -- was vice president.

A delay in the Arkansas case could push its resolution or other decisions in the case beyond primaries in the Democratic Party's nominating process for president. Joe Biden is a leading contender in that race.

The Iowa caucuses will be Feb. 3, followed by the New Hampshire primaries on Feb. 11, the Nevada Democratic caucuses on Feb. 22 and the South Carolina Democratic primary on Feb. 29.

Dustin Duke, a Little Rock lawyer who has no connection to the Biden case, said the attempts to intervene sounded far-fetched.

"They have to prove standing to be allowed into the lawsuit," said Duke, whose practice includes family law. "They have to have some connection to the paternity suit. If I was hit by Hunter Biden's automobile, I wouldn't file to intervene in his paternity suit. You'd file your own lawsuit based on the tort."

"If they're bringing up issues that have nothing to do with the paternity of the child, they're not going to get anywhere with that," Duke said. "I haven't seen the pleadings, but it sounds like it's either for publicity or some sort of political purpose."

McSpadden filed an order saying he was recusing pursuant to the Administrative Plan of the 16th Judicial Circuit, which covers five counties in rural north-central Arkansas.

According to the administrative plan, the case will now go to Circuit Judge Holly Meyer of Heber Springs.

A hearing in the case is scheduled for next Tuesday at the courthouse in Batesville. Attorneys for Roberts had urged McSpadden to find Biden in contempt of court at the coming hearing for not providing financial information as ordered by the judge.

According to the administrative plan, the four judges in the 16th Circuit "work together to streamline the handling of the district's workload."

"The judges of the circuit have always cooperated in handling heavy dockets and when conflicts occur," according to the administrative plan.

According to Rule 2.11 of the Arkansas Code of Judicial Conduct, "A judge shall disqualify himself or herself in any proceeding in which the judge's impartiality might reasonably be questioned."

In many jurisdictions, the term "recusal" is used interchangeably with the "disqualification."

"One of the clearest indicators of a judge's integrity is when he or she recuses from a case," said Lancaster, the plaintiff's attorney. "It highlights the ethos and values that make the judiciary such a powerful, separate branch of government. Our client sincerely thanks Judge McSpadden for his time and attention to what has become a difficult and convoluted child support matter."

Roberts filed the paternity suit in May, saying she and Hunter Biden were in a relationship that resulted in the birth of "Baby Doe" in August 2018.

On Nov. 20, Lancaster filed a motion with the court that DNA testing had established, "with scientific certainty," that Hunter Biden is the baby's father.

Biden's attorney told the court that Biden is unemployed and has been without a monthly income since May.