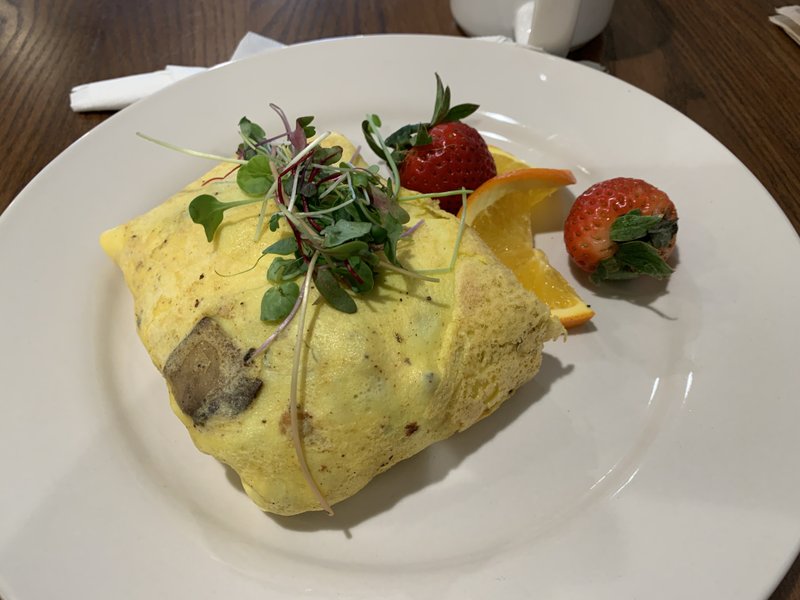 The Starbucks at Kavanaugh Boulevard and North Pierce Street in Little Rock's Pulaski Heights closed at the end of 2018. In late May, the owners of Mugs Cafe on Main Street in North Little Rock's Argenta District announced they were taking the place over, with a mid-July target to open.

July came and went. And so did August, September and part of October without any apparent progress before the Little Rock Planning and Development Department got an application for a building permit — for $145,853 (an unusually specific amount, actually) to "remodel existing space for new coffee and cafe business."

Work thereafter proceeded rapidly — so rapidly that when the new Mugs Cafe Heights opened Dec. 13, even its Facebook page described it as a "surprise."

In consequence, the cafe is still in many respects a work in progress as the staff tries to get up to speed. The menu is pretty much that of the Argenta original (it's available on the website, but the prices are substantially out of date); however, spaces on the menu board that say "Teas" and "Single-Origin Coffees" are covered with blank white cardboard. And if you're looking for anything to drink besides coffee and coffee constructs, orange juice or water, you are, for the time being at least, out of luck. The Argenta original offers bottled sodas, iced teas, etc., but there's not yet any kind of storage space for them here.

Whereas the original cafe has more of a shotgun-narrow footprint, this one is square, with walls that are pretty much unrelievedly off-white without decoration, except for a merchandise area with T-shirts, bagged coffee, Mugs mugs and tchotchkes. When the place is full, it's loud; baristas summoning latte sippers to pick up their orders have to yell over the din.

In Argenta, the big tables are live-edge wood; in the Heights they're pseudo-woodgrain, with those ubiquitous brushed-aluminum patio chairs (the exception: a handful of tables along the west wall, which have tan-padded chairs opposite bench seating with electric plug-in sockets for your laptops, etc.). There's also a bar-seating work station along one front window.

Order at the front counter — even at nonpeak periods there's likely to be a line — and get a number if you're dining in; unlike the original cafe, where the kitchen calls names out of a dispensary window and you pick up the food yourself, here food runners take it to your table. The line to order stretches through the tables, which cause some traffic pattern problems with food runners, patrons returning to counter to pick up their lattes and those headed to or from the restrooms.

At the original, you're expected to bus your table yourself; here, a member of the staff is assigned to that duty, which is important, because at peak periods, finding a vacant table may be a matter of pure good timing. We saw customers who either found the wait to order too long or that visibly vacant tables were lacking peel off and leave.

Mugs' breakfast items are available all day, including the Breakfast Bagel ($7.50), a fried egg, bacon and Cheddar on a food-service "everything" bagel. The Argenta cafe has let us substitute smoked salmon, aka lox, which it otherwise serves on a club sandwich, on the bagel with cream cheese; while it caused the counter order-taker a moment of confusion on how to ring it up, we pulled that off here as well.

The kitchen, as it is in Argenta, is about the size of a postage stamp, which could explain the lengthy wait we had on a Sunday morning when the place was packed — 30 minutes for our Build Your Own 3 Egg Omelet ($8.75). We chose sausage from the meat options (also ham, chorizo and bacon), mushrooms for our veggie (also tomato, spinach, red onion, sun-dried tomato and jalapenos) and Gouda instead of Cheddar. The omelet, folded into a square and topped with microgreens, was delicious, but we're still not sure it was worth the half-hour wait.

If you're gearing more toward lunch or dinner, we can recommend the Cuban Sandwich ($12.50), marinated pulled pork, ham, pickles, stone-ground mustard and Swiss cheese on a rectangular ciabatta bun. This turned out to be too big for one person to consume in one sitting, and the take-home portion was still sufficient for a light next-day supper.

And we can also recommend the 1/2 Pound Burger ($12), a hefty patty on a lightly toasted Kaiser bun with bacon, avocado, lettuce, tomato, pepper jack and spicy mayonnaise. We're not big fans of vegetables on burgers, so we had them hold the lettuce and tomato; we also had them hold the spicy mayo, which may have been a mistake, since about two-thirds of the way through the otherwise excellent burger we kind of lost interest. (Next time, we'll ask the kitchen to substitute some of that stone-ground mustard that came on the Cuban.)

Sandwiches come with a choice of packaged chips or an apple, which turned out to be a whole apple, cored and sliced. Our $5 freshly squeezed orange juice (the squeezing apparatus is behind the counter but out in plain customer sight) came in a Mason jar and we would have enjoyed it more if it had been a little better chilled.

Speaking of traffic concerns, this being the Heights, parking can be a problem. It was alternately easy (midmorning on Sunday, when we were expecting, incorrectly, worshippers attending the big Baptist church in the next block to eat up all the available spaces and we got a spot right in front) and impossible (lunchtime on a Friday).