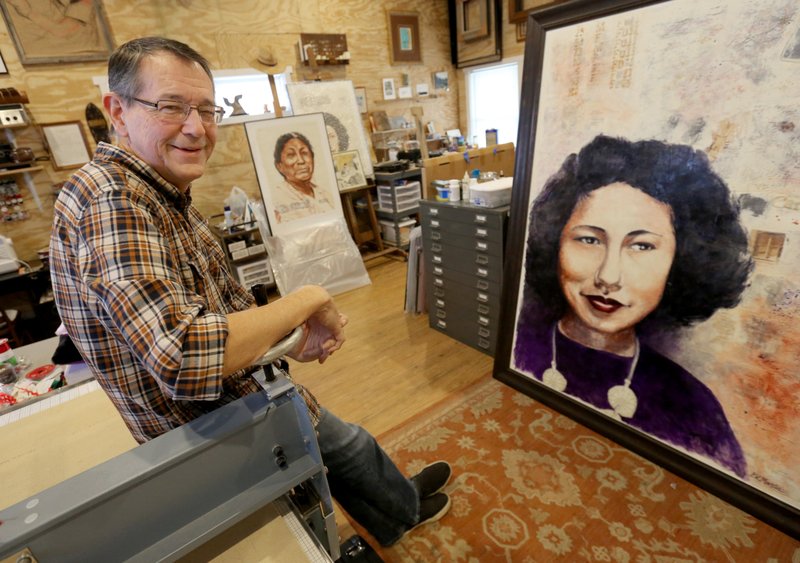 Bobby C. Martin describes his art Dec. 12 in his 7 Springs Studio in West Siloam Springs, Okla. Martin, a Native American, uses family photographs to influence his art. The 62-year-old always knew he had a talent for art, but didn’t delve into his craft seriously until he was in his 30s and failed to find success as a musician, he said. (NWA Democrat-Gazette/DAVID GOTTSCHALK)

Congress passed the Indian Removal Act in 1830 requiring various Native American tribes in the southeastern United States to give up their land in exchange for federal territory west of the Mississippi River. Most Native Americans resisted the policy, but as the 1830s wore on, most of the major tribes — the Choctaw, Cherokee, Creek, Seminole and Chickasaw — agreed to move to Indian Territory in present-day Oklahoma. A brief history of the Trail of Tears is available online at https://www.nps.gov/trte/learn/historyculture/index.htm.

The Museum of Native American History, 202 S.W. O St. in Bentonville, is open from 9 a.m. to 5 p.m. Monday through Thursday. The museum is closed Sunday. Admission to the museum is free. Information on featured events, exhibitions and programs is available online at https://www.monah.us/.

The 62-year-old always knew he had a talent for art but didn't delve into his craft seriously until he was in his 30s and failed to find success as a musician, he said.

"I basically swapped a starving musician's career for a starving artist's," Martin said.

Martin is a member of the Muscogee (Creek) Nation and was pursuing a master's degree in fine arts at the University of Arkansas, Fayetteville when he found inspiration in old family photographs.

"I knew I had this amazing heritage of all these great stories, but the only real link I had was these photographs," he said. "They were just cool little art pieces."

Martin grew up in Tahlequah, Okla., and didn't have a lot of connections to his American Indian heritage over the years. He said his mother was Muscogee, while his father had European ancestry.

The artist initially began copying family photographs as part of his graduate studies and progressively became more creative, adding etchings and objects, as well as using oil paint and encaustic wax to bring more depth to his work.

"You put it on paper, and it soaks through," he said of the wax. "It kind of puts this patina of age on it automatically when you do that."

Martin is working on a piece called But You Don't Look Indian, which will be featured in a show of the same name. The portrait is of his mother, Bonnie Martin, and is one of the largest pieces in his collection at 5 feet-by-6 feet, he said.

Four generations are represented in the work as well as the addition of doilies his grandmother made and some of his son's teeth that were removed when he had braces as a teen, he said.

His family's American Indian history is also sprinkled throughout the work, Martin said, with pages from his grandmother's hymnal, maps of Oklahoma and an old license plate embedded in the piece's wax.

"I'm going to put everything and the kitchen sink in this to make a point about identity," he said. "So I guess in some ways, it's just this giant self-portrait."

Much of Martin's work involves identity and shifts the narrative of what people may anticipate from American Indian art and how the population is represented within it.

"There was a certain expectation of what Indian art should look like," Martin said of the time when he began working as an artist 25 years ago. "There was even a certain style -- very much a flat style with many people on horseback and buffaloes and various very sort of stereotypical things."

Such art is often inspired by influences outside of the American Indian community, said Charlotte Buchanan-Yale, the director of the Museum of Native American History in Bentonville.

Founded by David Bogle, a member of the Cherokee Nation from Bentonville, the museum houses more than 10,000 American Indian artifacts.

"Hollywood and television think everybody is a Plains Indian living in a tepee, which is just crazy talk," Buchanan-Yale said. "What we tried to do is expand that."

Inaccurate history lessons, media reports and rumors have contributed to stereotypes individual American Indians aren't U.S. citizens, receive money from the government, don't pay taxes, are rich from casino proceeds and go to college for free, according to a research initiative by Reclaiming Native Truth.

The effects of such stereotypes can be profound, according to the initiative. They can harm the self-esteem and aspirations of American Indians, especially children. Martin said he had no way to relate to how American Indians have been historically represented in art.

"We grew up in eastern Oklahoma in a different sort of environment than in western Oklahoma, where it was more the Plains idea of tepees and buffalo," he said.

What Martin said he did relate to was the history and the resiliency of the American Indian population, who've overcome political adversity and relocation, while attempting to maintain a sense of connectivity as a people.

"That's really what I want to show, is that kind of sense of family and community," Martin said. "It just so happens that all my family and my community are Native people."

The Cherokee Nation is the most predominant population in the region, according to Bonnie Barnes, the museum's assistant manager.

"Before it was Osage, Caddo and Quapaw," Barnes said. "They were the ones who were indigenous here."

Many of Northwest Arkansas' early American Indians were forced to migrate out of the state through the Trail of Tears in the 1830s, according to the National Park Service.

Martin recognizes his art doesn't just tell his family's story, but also builds awareness for the history of the region's American Indian population.

"It represents memory. It represents honoring my ancestors. It represents giving them honor and recognition for the work and the care that they took of me, whether I knew it or not," he said. "It's been interesting that it's turned out that it's kind of grown to mean more than that for not just for me, but for other people."

Work by organizations such as Bentonville's Native American Museum and Crystal Bridges Museum of American Art is pivotal for keeping momentum to further change the narrative, Martin said.

"Major museums like Crystal Bridges are starting to be interested in collecting contemporary Native art," he said.

Martin said he sits on an advisory board at Crystal Bridges to promote inclusiveness and more diversity in art at the museum.

"I think this is a goal of a lot of different museums and art centers, is to tell a clearer and more inclusive picture of the history of the United States that involves a lot more than just this idea of colonial America," he said.

Art is an ideal vehicle for gaining a better understanding of the American Indian community, Barnes said.

"It crosses all language barriers," she said. "You don't have to speak the language or read it to appreciate it."

Art is a nonconfrontational and accessible way to negate stereotypes, Martin said.

"History and writings are incredibly important in enlightening people, but sometimes maybe this story starts by somebody seeing a piece of art or a picture or something that might get them thinking," he said. "They could still see this as purely as an old family photo, but then there's also stuff bubbling around under the surface if you wanted to look for it."

Bobby C. Matin describes his art in his in West Siloam Springs, Okla. “There was a certain expectation of what Indian art should look like,” Martin said of the time when he began working as an artist 25 years ago. (NWA Democrat-Gazette/DAVID GOTTSCHALK)