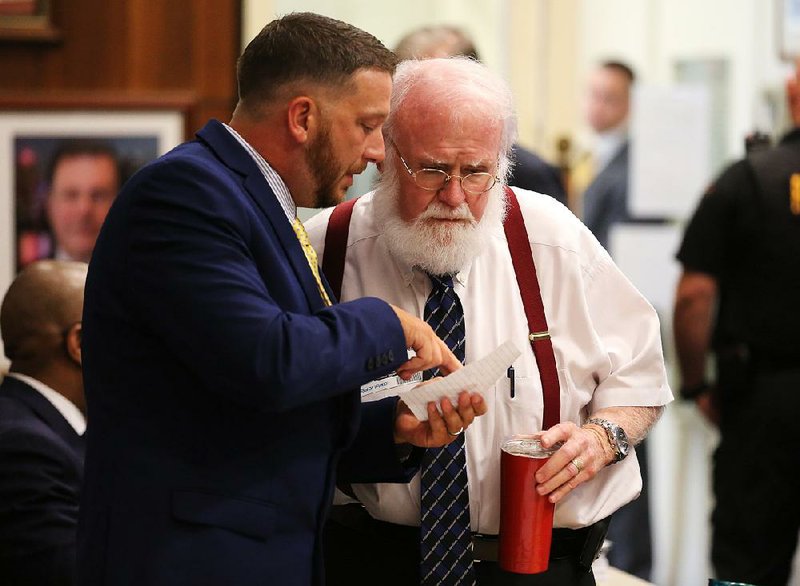 The city of Little Rock will appeal the reinstatement of Officer Charles Starks, whose May firing was reversed Thursday morning, according to a statement from Khayyam M. Eddings, an attorney with Friday Eldredge & Clark, LLP.

Pulaski County Circuit Judge Tim Fox ordered Thursday morning that Starks be reinstated with a reduced salary and 30 days suspension instead of termination.

“Most often used in mitigation is acceptance of responsibility. In this case, Officer Starks steadfastly refused to accept responsibility for what the Court held was a clear violation of the General Order 303.II.E.2,” the statement said. “Understanding these facts, as counsel for the City of Little Rock we intend to appeal the Court’s decision and ask the Court to stay its order reinstating Officer Starks pending the appeal.”

A Pulaski County circuit court judge ruled Thursday that Little Rock police officer Charles Starks should not have been fired after a traffic stop in which Starks fatally shot a city resident.

Judge Timothy Fox ruled that a 30-day suspension and a reduction in Starks’ pay to that of an entry-level officer are sufficient discipline.

On Feb. 22, Bradley Blackshire, 30, drove a black Nissan Altima into a parking lot at 7305 Kanis Road near South Rodney Parham Road. A license plate reader had flagged the car as stolen, and Starks was the first officer to respond to the report. After a few seconds of heated conversation, Blackshire rolled the vehicle forward, striking Starks' leg.

Starks fired his weapon several times and walked in front of the vehicle in what he later said was an attempt to get to his patrol car. The car Blackshire was driving rolled forward and struck Starks, who fired several more times. Eight of the 15 bullets Starks fired struck Blackshire, and he died.

Fox wrote that Starks’ actions from the time he exited his cruiser to the end of the incident were “those of a reasonable certified law enforcement officer" with his experience, but he said "illogical decisions" before that did violate policy.

After the shooting, Starks was immediately placed on administrative leave, and he was fired on May 6. Two weeks before he was fired, the Pulaski County prosecuting attorney's office ruled that the shooting was justified.

Because Starks was not charged by the prosecuting attorney, the judge’s decision was limited to whether Starks violated a department rule, and if he did, what discipline is appropriate.

The rule at issue, General Order 303 Section II E 2, states, "Officers will not voluntarily place themselves in a position in front of an oncoming vehicle where deadly force is the probable outcome. When confronted by an oncoming vehicle, officers will move out of its path, if possible, rather than fire at the vehicle."

The judge ruled Starks did violate the policy but that termination of employment, the most severe discipline, was not necessary.

He wrote that there are “any number of possible scenarios where the consequential results could have been even more substantial to both civilians as well as law enforcement personnel.”

He noted a 30-day suspension was by itself “insufficient” and because a reduction in rank was not an option, a reduction in pay was the remaining appropriate discipline.

The Associated Press contributed to this story. This story was originally published at 9:56 a.m.