University of Arkansas Little Rock head coach Darrell Walker during the game against Texas State at the Jack Stephens Center in Little Rock on on January 2, 2020. More photos are available at arkansasonline.com/13ualrtsbb. (Arkansas Democrat-Gazette/Jeff Gammons)

Moments after the final buzzer sounded in the University of Arkansas at Little Rock's 72-68 victory over Texas State on Thursday night, an ecstatic Darrell Walker hardly could contain himself.

The second-year UALR men's coach rushed to the sideline table at half court, grabbed the public-address microphone and took it upon himself to make a plea to the announced Jack Stephens Center crowd of 1,082.

"Thank y'all for coming out. We need y'all's support," Walker shouted. "Come back and see us."

Trojan fans won't have to wait long to see this product again, one that continues to make strides from last season's 10-21 misery. UALR (9-5, 3-0 Sun Belt Conference) hosts Texas-Arlington on Saturday and Georgia Southern on Monday.

If those games turn out like any of the Trojans' first three in Sun Belt play, fans are in for more late-game spectacles.

With the clock dwindling under a minute to play, the Trojans led 70-68 before junior guard Ben Coupet Jr. gifted the Bobcats with a turnover.

But UALR's defense bailed him out, forcing a missed three-pointer. After a Texas State offensive rebound, a jump-ball call swung possession to the Trojans. That forced the Bobcats to foul junior guard Jaizec Lottie with 18 seconds left, and he hit two free throws to ice the game.

The Trojans moved to 4-2 this season in games decided by five points or less -- with three of those victories coming in UALR's first three conference games.

"Last year we were fighting a lot -- we were coming back, but we were just falling short," sophomore forward Kamani Johnson said. "But I feel like this year, it's a different team. We're locked in more."

Each of those performances were key as the Trojans, winners of four in a row, played critical stretches without sophomore point guard Markquis Nowell, who tied his season lows of seven points and 25 minutes. He fouled out with 6:12 left in the game.

Nowell was hit with a technical foul with 8:44 left in the first half after directing frustration toward an official when he thought he was fouled on a shot attempt.

At that point in the game, it was all Bobcats.

Less than a minute after Nowell went to the bench with three fouls, Texas State held a 26-12 lead. A 9-0 run by the Trojans cut into the deficit, but Texas State guard Nijal Pearson answered with a three-pointer, guard Caleb Asberry dunked in transition, and Pearson hit another three. The Bobcats went back up by 12, and then eventually 15 late in the half, before they took a 39-28 lead into the break.

Pearson, who entered Thursday ranked third in the Sun Belt in scoring, led Texas State with 25 points and hit 5 of 9 from deep. Asberry finished with 12 points, and guard Mason Harrell tallied 17 points and 5 assists.

But the Trojans' 20-8 run in the opening 6:55 of the second half shifted momentum, and the Jack Stephens Center began to get as loud as it's been all season down the stretch.

UALR freshman guard Jovan Stulic drew a charge call with 3:37 left, which was followed on the other end by a Coupet no-look pass into the lane to Johnson, who threw down a dunk to put UALR ahead 68-64.

The crowd got louder, and the Trojans rode the energy to another tight victory.

"I think these guys deserve to have a crowd because of the way we've played on the road and at home," Walker said. "I think we play an exciting style of basketball. Let's be honest -- when this place gets packed, it gets loud, and I want that advantage, and my players want that advantage."

Arkansas State University (10-4, 2-1 Sun Belt Conference) was held to 29% shooting Thursday in a loss to Texas-Arlington (5-9, 1-2) at First National Bank Arena in Jonesboro.

The Mavericks outrebounded the Red Wolves 42-33, held a 32-24 scoring advantage in the lane and had 27 assists on 31 made shots in a game that saw just one lead change. ASU made just 2 of 9 three-pointers, but hit 18 of 28 free throws.

Melo Eggleston finished with 10 points and was the only Arkansas State player in double figures. Davis Steelman led Texas-Arlington with 14 points, David Azore had 13 and Jabari Narcis chipped in with 11.

Hayden Koval scored 23 points and grabbed 10 rebounds for the University of Central Arkansas (5-7, 1-2 Southland Conference), but it wasn't enough as the Bears fell in overtime to Houston Baptist in Houston.

Jaxson Baker and Deandre Jones scored 21 points each for UCA. Ian DuBose scored a game-high 44 points on 15-of-23 shooting to lead Houston Baptist, while Myles Pierre poured in 16 and Jalon Gates added 15. 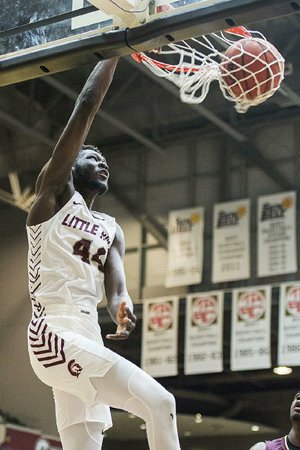 UALR junior forward Ruot Monyyong dunks the ball during the Trojans’ victory over Texas State on Thursday night at the Jack Stephens Center in Little Rock. Monyyong fi nished with 14 points and 17 rebounds for UALR, which improved to 9-5 and 3-0 in the Sun Belt Conference. More photos available at arkansasonline.com/13ualrtsbb. (Arkansas Democrat-Gazette/Jeff Gammons) 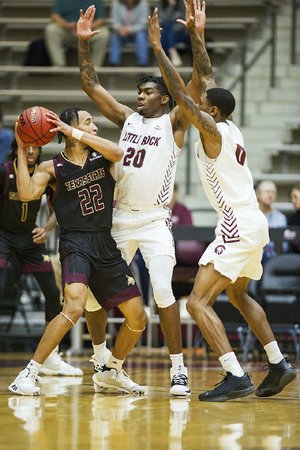