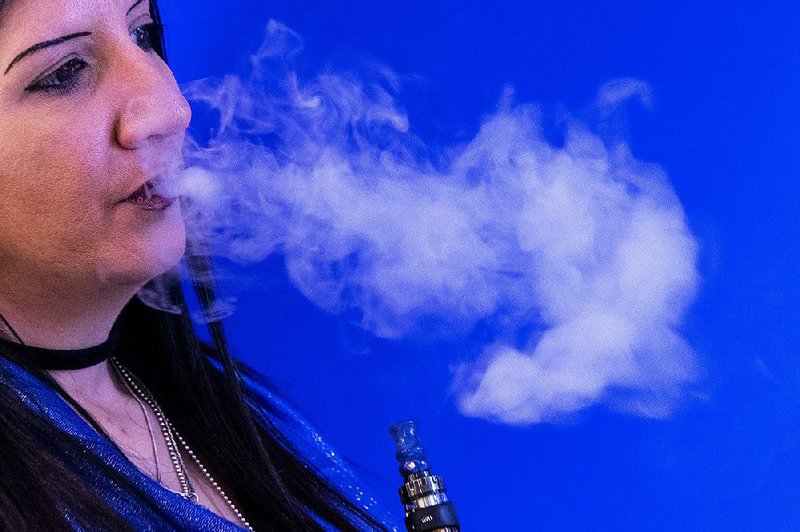 Spike Babaian, owner of the VapeNY.com, vapes Thursday in New York. U.S. health officials will begin cracking down on most flavored e-cigarettes that are popular with underage teenagers, but their plan includes exceptions that benefit vaping manufacturers, retailers and adults who use the nicotine-delivery devices. (AP/Mary Altaffer)

The Food and Drug Administration on Thursday ordered companies to stop manufacturing, distributing and selling most cartridge-based electronic cigarette flavors by early February, saying the crackdown is urgently needed to reduce teen vaping.

The deadline was announced as the Trump administration officially unveiled its long-debated vaping policy. The ban affects the fruit- and mint-flavored pods that have soared in popularity among young people but does not apply to menthol- or tobacco-flavored cartridges. It also spares the kind of e-liquids used in open-tank systems typically sold by vaping stores that cater to adults.

"We will not stand idly by as this crisis among America's youth grows and evolves, and we will continue monitoring the situation and take further actions as necessary," Azar pledged Thursday.

E-cigarettes are battery-powered devices that typically heat a flavored nicotine solution into an inhalable aerosol. They have been pitched to adults as a less-harmful alternative to traditional cigarettes, but there is limited data on their ability to help smokers quit.

The Food and Drug Administration has struggled for years to find the appropriate approach to regulate vaping. No e-cigarettes have yet won FDA approval, but the agency permits their sale under a policy called "enforcement discretion." Under Thursday's policy change, the FDA said that it would begin targeting companies that continue to sell the banned products. Companies will have 30 days after the policy is published to halt manufacturing, sales and shipping.

The administration's action was prompted by data from a survey showing that more than 5 million students in middle and high school had used e-cigarettes within the past 30 days. The majority reported usually using the cartridge-based products.

To date, e-cigarettes have never had FDA authorization to be on the market. The new policy will detail what products the agency will take steps to block.

The announcement, which came two days after President Donald Trump talked about protecting both families and the e-cigarette industry, marks the end of a chaotic policymaking process that left both vaping supporters and public-health groups wondering what would happen next.

"We have to protect our families," Trump told reporters on Tuesday. "At the same time, it's a big industry. We want to protect the industry."

In September, Trump said the FDA would ban all flavored e-cigarettes but tobacco -- a sweeping effort that would have applied to both the closed-pod systems and the e-liquids used for open-tank systems.

"It's disturbing to see the results of industry lobbying to undermine public health protections, especially the lives and health of our youth," said American Lung Association President and CEO Harold Wimmer. The association and other health groups argue that teenagers who vape will simply shift to using menthol if it remains on the market.

Information for this article was contributed by Laurie McGinley of The Washington Post; and by Matthew Perrone and Aamer Madhani of The Associated Press.