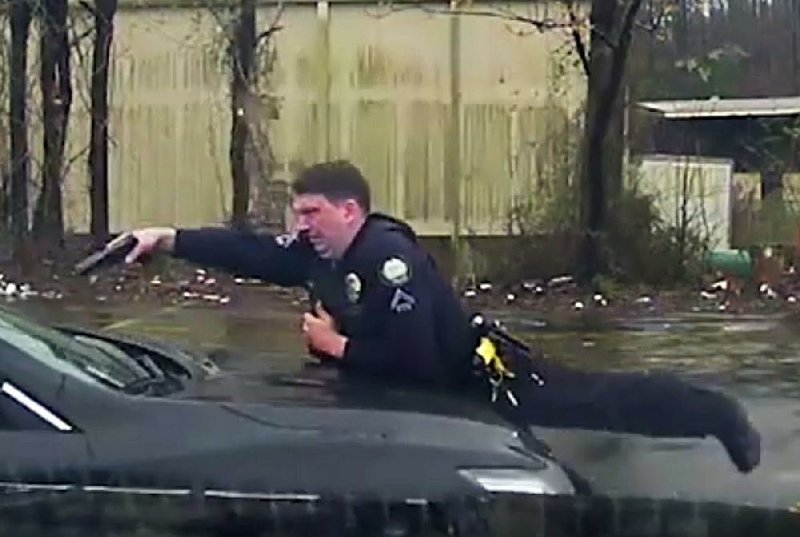 A Pulaski County circuit judge ordered a Little Rock police officer reinstated Thursday, eight months after the officer was fired for violating department policy in the fatal shooting of a Little Rock driver during a traffic stop, but the city plans to appeal, authorities said.

Ruling that the punishment was too severe, Judge Tim Fox ordered that officer Charles Starks' firing be reversed and that he receive back pay at a reduced salary. Starks was fired May 6 after an internal investigation found that he violated department policy in the Feb. 22 shooting that left 30-year-old Bradley Blackshire dead.

In a statement late Thursday, attorney Khayyam Eddings of the Friday Eldredge & Clark law firm, which represents the city in Starks' case, said the city plans to appeal Starks' reinstatement.

Fox's order Thursday reversed the 5-1 decision of the Little Rock Civil Service Commission to uphold Starks' firing. Fox, like the commission, had to determine whether Starks violated department policy and, if so, whether his firing was warranted. Fox wrote that Starks had violated the policy, but that his punishment was not appropriate.

The suspension was deemed as being retroactively served between Starks' firing and June 4.

Starks, who was not available to comment through his attorney Thursday, also will be reimbursed for seven months of pay, health and vacation benefits, retirement accrual and sick leave for the time between the end of his suspension and his reinstatement, the order says. Starks also will receive money to cover the costs of any transcripts necessary for his appeal.

"We're happy with that," Newcomb said of the judge's decision. "He's especially pleased that the judge found, like the prosecutor, no criminal conduct or civil liability."

Rizelle Aaron, Blackshire's uncle and former president of the Arkansas NAACP, said Thursday that he urges the city to file an appeal. Newcomb said any appeal would be filed with the Arkansas Court of Appeals.

"One of the things that's so terrible about this is just when it felt like Kimberly and the rest of us got some closure, it's like reopening the wound," Aaron said, speaking of Blackshire's mother, Kimberly Blackshire-Lee. "Now, it's just prolonging the agony of getting any semblance of closure."

"Mayor Scott simply told me they plan to file for an appeal," Aaron said. "Chief Humphrey was very sympathetic. He asked me to let Kim know that he was praying for our family."

Scott and Humphrey refused to comment Thursday, both citing the possibility of an appeal. Scott declined through his communications director Stephanie Jackson; Humphrey declined through the department's spokesman, officer Eric Barnes.

"Anger was my first reaction, and it's still my reaction," Aaron said. "We kind of anticipated that Fox would do that, but the way that Fox did it made me mad."

Aaron said he felt that the decision was politically and racially motivated.

"Fox understands that he needs the white votes," Aaron said. "If Fox had made a decision to uphold Starks' termination, he understood that would negatively impact his campaign. He made it a matter of political gain. Now the Arkansas Supreme Court has to make the decision. ...What Fox did was just kick the can down the road."

Eddings said in a statement Thursday that Fox "made no analysis of mitigating factors that would justify a lesser penalty than termination."

"On behalf of the City of Little Rock, we respectfully believe that the Court erred," Eddings' statement said.

Eddings asked that the court to "stay its order reinstating Officer Starks pending the appeal."

Newcomb said Thursday that he intended to ask the court to reinstate Starks while the appeal is ongoing, given that appealing to the higher court is a long and tedious process. Such appeals can often take as long as a year.

"The mayor's decision is wasting a bunch of taxpayers' money," Newcomb said. "I think it's vindictive."

It's rare for a discipline case to be appealed as high as the Court of Appeals, Newcomb said, although he has seen instances of such in his time as an attorney.

To win an appeals case, the city would have to prove that Fox's judgment was "clearly erroneous," Newcomb said.

In his letter notifying Starks of his termination, Humphrey referred to General Order 303 Section II E 2, which says "Officers will not voluntarily place themselves in a position in front of an oncoming vehicle where deadly force is the probable outcome. When confronted by an oncoming vehicle, officers will move out of its path, if possible, rather than fire at the vehicle."

On Feb. 22, Starks was dispatched to a parking lot at 7305 Kanis Road near South Rodney Parham Road, where Blackshire had parked a stolen Nissan Altima. After Starks ordered Blackshire out of the vehicle several times, the car rolled forward, grazing Starks, according to dash camera footage of the shooting. Starks fired about four times. Starks then stepped in front of the vehicle in what he later said was an attempt to retreat to his patrol vehicle. The vehicle rolled forward, struck the officer and Starks began shooting again.

The vehicle injured Starks' knee, and eight of the 15 shots that Starks fired struck Blackshire, according to the investigative file.

Except for Humphrey, each officer in Starks' chain of command wrote in the department's review of the shooting that Starks did not violate the order.

"The court is not minimizing the loss of human life and other material consequences from the subject incident," Fox wrote. "There are, however, any number of possible scenarios where the consequential results could have been even more substantial, to both civilians as well as law enforcement personnel."

"These findings and conclusions suggest that the Civil Service Commission's 5-1 vote affirming Starks's termination should have been allowed to stand. Instead, Judge Fox opened the door for Starks to return to patrolling our community, armed."

Little Rock Fraternal Order of Police President Ronnie Morgan, who has said since February that the organization supports Starks' right to due process, said he was pleased that Starks will be going back to work.

"It's always been our position from the beginning that the officer must be afforded due process," Morgan said. "While we are pleased with the judge's decision, that does not mean we agree with it totally."

Morgan said the union disagrees that Starks "violated the policy at all."

"The policy was not to place yourself in the path of a moving vehicle where deadly force is the likely outcome," Morgan said. "I don't believe he ever did that."

Aaron said he fears that Fox's ruling will have an effect on "Starks and officers like Starks."

"Judge Fox failed to consider that his decision is going to start in other like-minded cops the feeling of entitlement, the feeling that they are justified," Aaron said. "They believe they can do anything. ... That puts people who look like me in a more dangerous position."