Listomania: What various highly invested moviegoers thought was the best of 2019 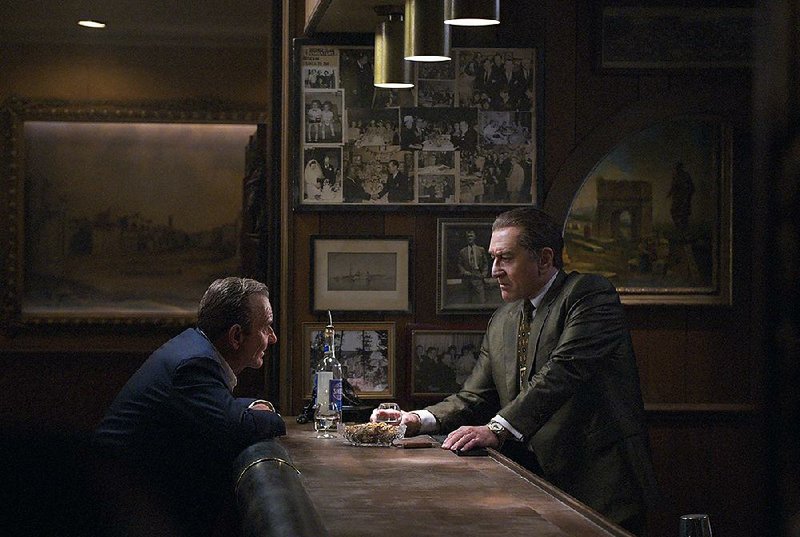 Joe Pesci and Robert De Niro reunited with Martin Scorsese for The Irishman, one of the signal films of 2019.

Every January -- when the new theatrical releases slow to a trickle (this year, only the new remake of The Grudge is opening and they're not screening that for critics so no review) -- we check in with some of our favorite moviegoers to ask what they thought was the best of the just-concluded year. They send us Top 10 lists and thoughts. And we run them with a minimum of editing. (Because our holiday deadlines are brutal, and we need some time off too.)

There will be more of these next week.

Wish I'd seen: 1917, Ash Is Purest White, Atlantics, Clemency, A Hidden Life, Les Miserables, Peterloo, Portrait of a Lady on Fire, Transit and too many documentaries to list here.

1. The Irishman -- Scorsese's powerful three-hour-plus epic is almost at The Godfather level. An aging, crippled mobster (Robert DeNiro), once befriended by Teamsters boss Jimmy Hoffa (Al Pacino), narrates the film in flashback. Joe Pesci as a mobster who arranges things is quietly brilliant.

2. Parasite -- How fragile privilege is! Comic, then creepy look at what happens when a family of the underclass connive to gain employment with a family of one-percenters. Who are the real parasites? Likely winner of the Best International Film Oscar (formerly Best Foreign Language Film). In Korean.

3. Once Upon a Time ... in Hollywood -- Tarantino's title itself is virtually a spoiler: This will be a fairy tale, albeit one set in the 1960s Hollywood that shaped him. Splendid actors in top form, particularly Brad Pitt doing the best work of his career and Margot Robbie as young starlet Sharon Tate.

4. Marriage Story -- Director Noah Baumbach gathered a superb cast -- Adam Driver, Scarlett Johannson, Laura Dern, Alan Alda, Ray Liotta -- for this look at "a marriage breaking up and a family trying to stay together." Their cutthroat-competitive lawyers make the latter a long shot.

5. The Mustang --A contemporary Western gem like last year's The Rider. The dangerous job of breaking horses culled from a herd of wild mustangs could provide opportunity for a convict who's seeking redemption (Matthias Schoenaerts), but first he has to tame himself. Moving without being sentimental.

6. The Farewell -- Bittersweet comedy "based on an actual lie," writer/director Lulu Wang tells us at the beginning. New Yorker Billi (Awkwafina) is distraught to learn her loving grandmother in China is dying -- but in the Chinese way, she doesn't know it. The family doesn't want her to be distressed. Should Billi join their conspiracy?

7. Little Women -- Greta Gerwig's feminist take on a classic, its fourth and arguably best adaptation, shifts back and forth between past and present. Saoirse Ronan bristles as the independent Jo and Meryl Streep has fun as haughty Aunt March. Also with Timothée Chalamet (Laurie) and a breakout role for Florence Pugh (Amy).

8. 1917 -- At the height of the Great War, two young British soldiers are sent on a vital mission through enemy lines. Hundreds of lives are at stake, including the brother of one of them. Director Sam Mendes and master cinematographer Roger Deakins track them in what appears to be one long, seamless shot, a remarkable piece of filmmaking.

9. Jojo Rabbit -- I detested Roberto Benigni's popular 1997 comic Holocaust movie Life Is Beautiful, so I was wary of this sprightly coming of age tale of a misfit German kid in WWII whose imaginary friend is Adolf Hitler (played broadly by its writer/director Taika Waititi). Surprisingly it works, and by the end, it's deeply moving.

10. Pain and Glory -- Fine Spanish director Pedro Almodovar's most personal film, about a movie director past his prime (an aging Antonio Banderas, magnificent). It also features Almodovar muse Penelope Cruz playing, in flashbacks, the mother of her real-life husband Banderas. In Spanish.

11. The Two Popes -- Über-traditionalist Pope Benedict disagrees with everything the progressive future Pope Francis says and tells him so. In the hands of two of the world's best actors, Anthony Hopkins (Benedict) and Jonathan Pryce (Francis), what could have been just a video on Vatican politics becomes a funny and touching movie.

12a. The Last Black Man in San Francisco -- A wistful history of black San Francisco distilled into this personal story of Jimmie Fails, a man obsessed with an old Victorian house where he once lived and which family lore says his grandfather built and lost. It isn't his city anymore, but he says, "You can't hate it unless you loved it."

12b. A Beautiful Day in the Neighborhood -- Quite different from last year's documentary. This one doesn't focus on Fred Rogers but on an Esquire magazine writer (Matthew Rhys) assigned against his protests to write a profile of Mr. Rogers (Tom Hanks). What ensues during and after their interviews is pure pleasure.

Best Documentary-- They Shall Not Grow Old Runnerup: American Factory

10. Missing Link -- Stop-motion animation is a dying art, and I really do hope it lasts. This charming little tale from underdog Studio Laika really won me over with its quirky story and lovable/laughable characters. That's where stop motion thrives best -- in wacky adventures like the one Zach Galifianakis, Zoe Saldana and Hugh Jackman find themselves on.

9. Yesterday -- This is the most underrated movie of 2019, and I'm not even a huge Beatles buff. It is just a remarkably cute and endearing story about a man who sings and plays guitar just well enough to thrive in a world where The Beatles vanished. Smalltown British musician trying to make it solely with the support of his adorable and plucky manager/love interest. It's great.

8. Pokémon Detective Pikachu -- This is the best-case scenario for a live-action Pokemon movie to hit the big screen and not look like garbage. But more than that, Ryan Reynolds and Justice Smith nail this truly hilarious urban fantasy film, which is a perfect introduction to the world of Pokemon for people who have no idea what it is. I laughed so hard during this movie, and to see Pokemon done right on the big screen is a dream come true for this '90s gal.

7. Once Upon a Time ... in Hollywood -- Tarantino movies come out once every four to five years, and they're always some of the best movies of the year when they do. Leo and Brad Pitt do fantastic work as washed-up cowboy actors trying to navigate '60s Hollywood. The real gem of this movie is the all-encompassing world Tarantino made, the ads, the sets, the cars, the clothes, it's just so immersive and well put together. I hope Pitt gets an Oscar for his role here. He was amazing.

5. Toy Story 4 -- I was skeptical when I saw they were making this after Toy Story 3 ended so perfectly. But there really was more story to tell, and I'm glad Little Bo-Peep got a chance to shine. Cars 2 and Monsters University may be trash, but Toy Story will always be Pixar's perfect franchise, and this ending had me in tears as I whispered, "To infinity ... and beyond." Please don't make Toy Story 5. You can only risk upsetting a perfect ending so many times.

4. The Highwaymen -- I'm not usually a big fan of crime films, but the trailer for this movie hooked me quickly. I think it's probably because they show this movie more like a Western than a straight-up crime film. Costner and Harrelson made such perfect partners coming out of retirement for one last roundup. Rotten Tomatoes reviews be damned. This was a fantastic movie.

3. How to Train Your Dragon 3 -- This series clearly shows that DreamWorks Animation has the moxy to go toe-to-toe with any animation Disney cranks out. I have laughed and cried through these three movies and watched Hiccup grow from a boy into a man alongside his faithful friend Toothless. This epic conclusion had me on the edge of my seat just as the previous two did, and it earned one of the top spots on this list -- hands down.

2. Knives Out -- I'll rightly critique Rian Johnson's attempt at Star Wars, but I will also be the first to admit how this whodunit caught me off guard to become one of the best movies of the year. This is literally a flawless film that kept me going from start to finish. Whether it's the worst murderer of all time, jerkwad Captain America or KFC 007, the characters in this movie are just stupendous. And the twists and turns don't stop until the credits roll.

1. John Wick 3 -- It was a tough call between this and Knives Out, but Keanu Reeves is just too lovable to play second fiddle to anyone else. This movie is just a 130-minute adrenaline shot. Mr. Wick kills with all the style, substance, and flair of the world's greatest assassin, and he gets up from some truly brutal beat-downs. This movie has no flaws. This franchise has no flaws. It's utter perfection and kicks The Irishman's ass out the door any day.

5. Portrait of a Lady on Fire

I'm not a great "critic" so I humbly submit the following:

Did you see either For Sama or One Child Nation at HSDFF? The FEMALE directors were guests at HSDFF, and I cried when I met them because of what they had to go through to make their films. Both of those films changed me as a human being and should both be nominated for an Oscar, in my opinion. The fact that both of the horrors depicted in the films are happening on the other side of the planet while we are over here drinking lattes is astounding, embarrassing and heartbreaking. Not shaming latte-lovers, I am one of them. And I realize these issues are systemic, layered, and have evolved over millennia -- but we need to do better. And minimally we need to be aware of what's happening, watching these two docs is a start and should be required by every citizen on the planet with internet and a screen.

I also would love to give an ACS screening nod to Troop Zero! Also directed by females -- directing duo Bert & Bertie did an incredible job with screenwriter Lucy Alibar's, darling film, that shows how an outcast Girl Scout troop challenges the troop juggernaut. The outcast little kid in all of us can identify with these hilarious, courageous, tough little girls (and boys). The story was told with imagination and magic. It made me laugh and cry and was a perfect film. I wish I had made it. 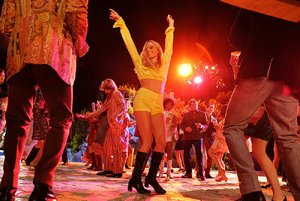 Margot Robbie had only a few lines but brightened the screen as a version of Sharon Tate in Quentin Tarantino’s Once Upon a Time ... in Hollywood, a 2019 film that was a favorite with critics. 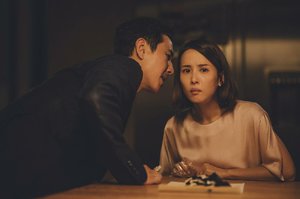 A wealthy South Korean couple (Sun-kyun Lee, left and Yeo-jeong Jo) have their lives infiltrated by a family of grifters in Bong Joon Ho’s Parasite. 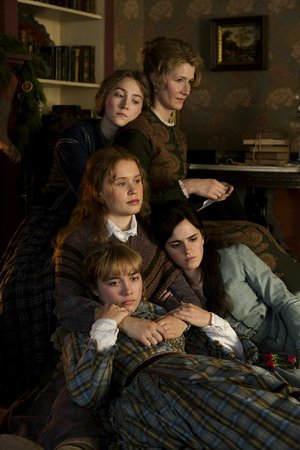 Print Headline: Listomania: What various highly invested moviegoers thought was the best of 2019