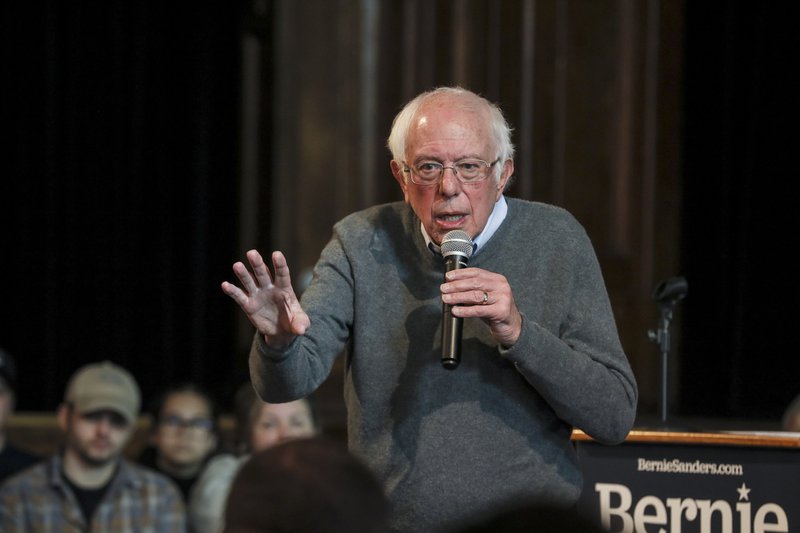 WASHINGTON -- Bernie Sanders announced Thursday that his campaign had raised $34.5 million in the final three months of last year, solidifying him as the quarter's top fundraiser in the crowded Democratic presidential field. Former Vice President Joe Biden rebounded from a summer slump to take in $22.7 million over the same period.

Each of the three candidates celebrated his latest fundraising for different reasons. Sanders' shows that a recent heart attack hasn't slowed him as primary voting looms. Biden trails the Vermont senator in the money race but topped his third quarter fundraising total of $15.2 million by nearly 50%. Yang's haul is enough to prove he remains very much in the race despite joining it as a political unknown.

The announcements came a day after Pete Buttigieg, the former mayor of South Bend, Ind., announced raising $24.7 million from October through December.

The amount of money pouring into Democratic campaigns suggests the party's primary may feature a long and protracted fight at a time when some would like to see a clear front-runner emerge. The lead-off Iowa caucuses are barely a month out, and Sanders, Biden and Buttigieg have been among the leaders of the crowded field, along with Massachusetts Sen. Elizabeth Warren.

Warren has relied heavily on small donations coming primarily online. Her campaign raised $24.6 million in the third quarter, but it acknowledged in a recent fundraising email collecting about $17 million with a few days to go.

Warren hasn't released her fourth-quarter numbers but said while campaigning Thursday in New Hampshire that they'd be out soon.

President Donald Trump's reelection campaign announced Thursday that it had raised $46 million in the fourth quarter and had a campaign bank account of $102.7 million. How much cash those trying to unseat Trump have on hand likely won't be clear until federal reporting deadlines later this month.

Biden has generally relied on more traditional fundraising methods than Sanders and Warren have, including frequent events with large donors. But the former vice president's campaign said it invested almost $5.2 million in tech and digital outreach in recent months, which helped it double the amount of money raised online in the fourth quarter versus the third.

The campaign also said that 57% of Biden's fourth-quarter donors were new and that it saw a bump in fundraising compared with previous weeks while impeachment proceedings against the president were being held in the House.

"Today's announcement is just the latest evidence of Joe Biden's growing strength and momentum heading into the early contests of 2020," Biden campaign manager Greg Schultz said in a statement, adding that the haul serves as "a constant reminder to Democratic primary voters that Trump is terrified by the idea of facing Joe Biden in a general election."

Sanders' campaign said that its funds came from more than 1.8 million donations, including from 40,000 new donors on the final day of the year alone.

"Bernie Sanders is closing the year with the most donations of any candidate in history at this point in a presidential campaign," his campaign manager, Faiz Shakir, said in a statement.

Sanders' 2020 bid has now raised more than $96 million built on 5 million-plus individual donations worth an average of about $18.

Sanders' campaign said that more than 99% of his donors have not reached federal donation limits, meaning they can contribute again. Its overall announced total does not include the $12.7 million Sanders transferred from other campaign accounts as part of his presidential run.

Meanwhile, Julian Castro, the only Hispanic in the 2020 Democratic presidential primary race, ended his campaign Thursday after a yearlong run.

Castro, who opened his campaign last January, dropped out after failing to garner enough support in the polls or donations to qualify for recent Democratic debates. A former San Antonio mayor who later became President Barack Obama's secretary of Housing and Urban Development, Castro had stalled for most of his campaign, hovering around 1% in polls, and never came close to raising the money that his better-known rivals did.

And author and spiritual guru Marianne Williamson has laid off her entire 2020 campaign staff but is pushing ahead with her Democratic presidential bid, two former staff members said Thursday.

Paul Hodes, a former congressman who had served as Williamson's New Hampshire state director and senior campaign adviser, confirmed that he had been laid off and "that the others in the national campaign have been laid off."

Information for this article was contributed by Hunter Woodall, Alexandra Jaffe, Paul J. Weber and Corey Williams of The Associated Press. 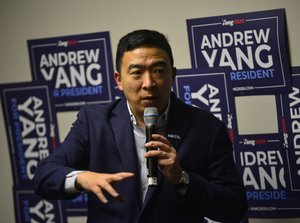