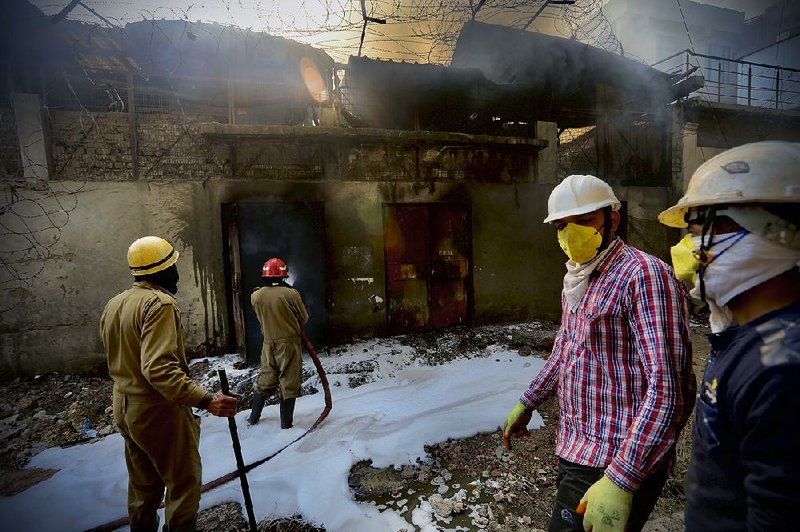 Firefighters work Thursday to extinguish a fire at a factory that manufactures batteries in western New Delhi. (AP/Manish Swarup)

NEW DELHI -- A factory manufacturing batteries in the Indian capital caught fire and collapsed Thursday, killing one firefighter and injuring 19 others, officials said.

A fire official said three people were rescued from the debris of the building in the Peera Garhi area in western New Delhi. Thirty-five fire engines were rushed to the site and it took them more than 10 hours to douse the blaze.

Arvind Kejriwal, New Delhi state's top elected official, said in a tweet that one of the injured firefighters had died.

The fire service control room said that 19 firefighters were injured in the operation, and one of them later died in a hospital. One security guard also was injured in the fire, which broke out in the basement of the building.

Police said the rescue work was over.

There were no workers inside the building when the fire broke out about 4 a.m., the police said.

A heavy smoke engulfed the rear portion of the building, which had collapsed. It contained material like acid and plastic used for making batteries, police said, adding the cause of the fire was being investigated.

BRUSSELS -- The arrest warrant targeting Carles Puigdemont has been suspended by Belgian judicial authorities because of the Catalan separatist leader's immunity as a European lawmaker, his lawyer said Thursday.

The two are wanted in Spain for their role in an illegal 2017 secession bid by the Catalan government and separatist lawmakers. They fled to Belgium after the attempt failed and were elected to the European Parliament in May as representatives of Catalan separatist parties from Spain.

Last month the European Union's top court, the European Court of Justice, overturned a decision preventing Puigdemont and Comin from taking their European Parliament seats. Spain's state prosecutors' office, however, asked a Spanish judge to maintain the international arrest warrants for the pair.

It was still not clear whether Puigdemont and Comin, whose extradition hearing had already been postponed to Feb. 3, will be allowed to take their seats.

Belgium's federal prosecutor's office did not immediately answer a request for comment.

MOSCOW -- The Islamic State group is claiming responsibility for an attack on a police post in southern Russia.

Russian officials say one police officer was killed and three were injured when two men attacked a police post in Magas, the capital of the republic of Ingushetia, on Tuesday.

News reports said the attackers hit one police officer with their car and stabbed three others.

One of the attackers was killed when police opened fire and the other was wounded.

Ingushetia is in the northern Caucasus region, where police and Islamic militants have clashed.

A statement on an Islamic State-affiliated website Thursday claimed two police were killed and did not mention attacker casualties.

BERLIN -- Three women are under investigation in Germany for launching paper sky lanterns for the new year that apparently ignited a fire that killed more than 30 animals at a zoo, officials said Thursday.

The three women -- a mother and her two daughters, ages 30 to 60 -- went to police in the western city of Krefeld on New Year's Day after authorities held a news conference about the blaze, criminal police chief Gerd Hoppmann said.

The women are being investigated on charges of negligent arson, prosecutor Jens Frobel said. The offense can carry a prison sentence of up to five years.

Many Germans welcome in the new year legally with fireworks at midnight. Sky lanterns, however, are both illegal and unusual in Germany. The mini hot-air balloons made of paper have been used in Asia for centuries.

The fire started in a corner of the ape house's roof in the first minutes of the new year and spread rapidly. The zoo near the Dutch border says the ape house burned down and more than 30 animals -- including five orangutans, two gorillas, a chimpanzee and several monkeys -- were killed, as well as fruit bats and birds. The animals either burned to death or died from smoke inhalation, authorities said.

Investigators believe that just one lantern started the blaze. They found the other four later, with handwritten good wishes for the new year attached.

The destroyed ape house lacked fire detectors and sprinklers, which weren't required when it was built in the 1970s. The zoo said, however, that it had passed a regular fire protection check a few months ago. 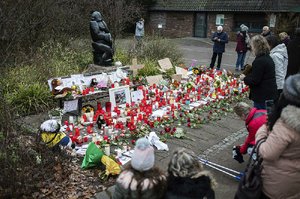 A memorial grows Thursday at the main entrance to the zoo in Krefeld, Germany, where a New Year’s Day fire killed more than 30 animals. (AP/Marcel Kusch)