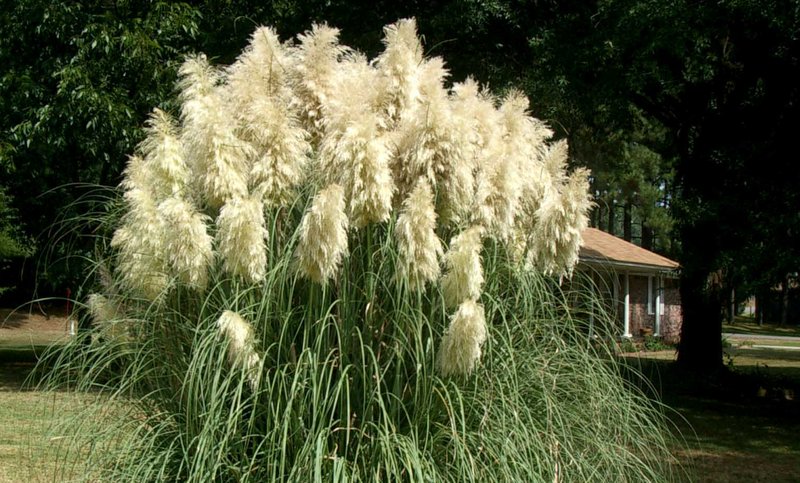 Pampas grass shines in the fall and winter landscape. (Special to the Democrat-Gazette/Janet B. Carson)

Q The plume of my Pampas grass plant was broken off by a grandchild. Will the plant produce another, and if so, how can I assist that regeneration?

A Pampas grass is a perennial grass that comes back from year to year, but it is usually cut back to the ground before new growth begins in the spring. The plume does not last from year to year. Hopefully, your grass will produce more plumes next season. 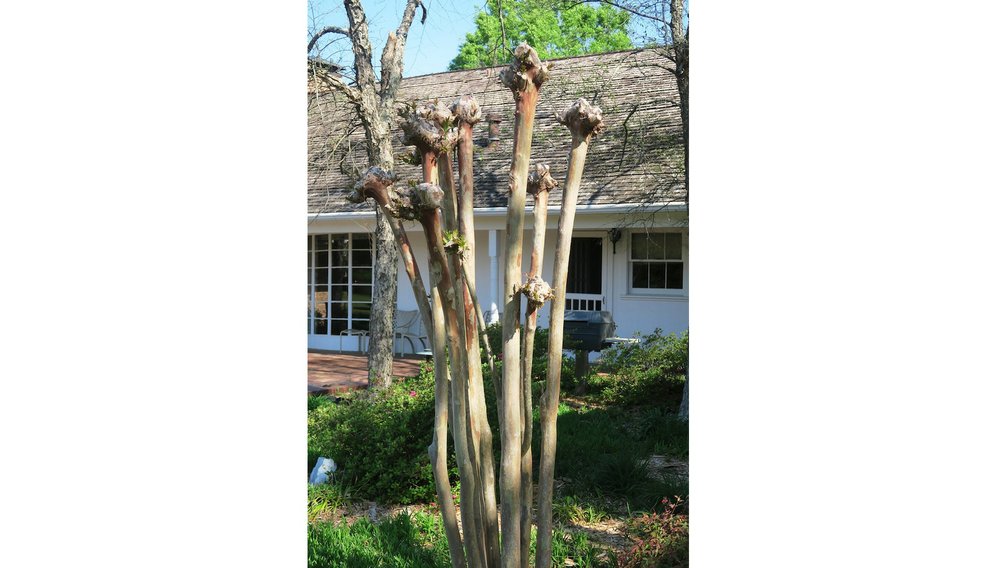 The unsightly knobs on this crape myrtle were caused by years of unnecessary and inappropriate pruning: "crape murder." (Special to the Democrat-Gazette/Janet B. Carson)

Q This is probably more a rant than a question. I know you have answered and discussed this ad nauseam, but why do people cut their crape myrtles back to those ugly knobs every year? Don't they know that crape myrtles are small trees and not shrubs? My crape myrtle is almost 25 feet tall and stately and beautiful, and I never cut it. Why must people try to control everything?

A I agree with you regarding "crape murder," the butchering of beautiful trees. Often the reasons given for the severe pruning are that the plants are too tall for the location — because they planted the wrong plant for that location; they thought they were supposed to, since all their neighbors prune them that way; or they want a smaller plant. In reality, there are a myriad of mature heights for crape myrtles, from ground-covers to dwarfs that get no taller than 3 or 4 feet, up to the standards, which can be 30-plus feet tall. It all goes back to the right plant for the right location. Read the tags or look up the information about the mature height of the crape myrtle (or whatever plant you are buying). Pruning won't be needed if you plant something that fits your location. 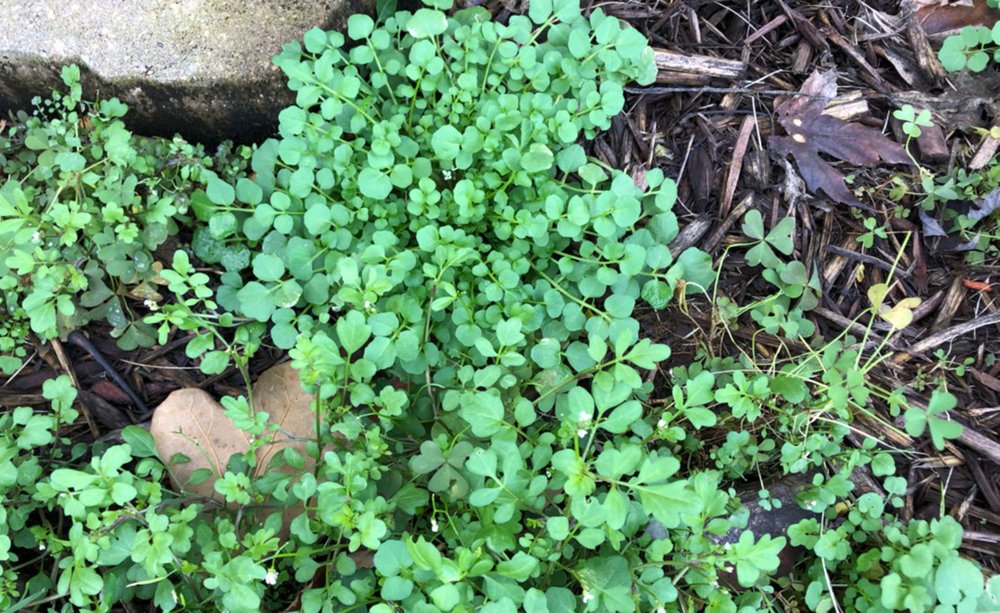 Hairy bittercress is an annual winter weed best dealt with as soon as its greenery pops up in the dormant lawn. (Special to the Democrat-Gazette/Janet B. Carson)

Q I think the spring-like weather we had in December has done wonders for my winter weeds. I have more green in my flower beds than I should, and I even saw a dandelion bloom already. What can I do to keep them from spreading? I have attached a few pictures of the problems.

A Winter weeds are doing quite well this season. Hairy bittercress is the weed with the rosette of foliage. Fortunately, it is an annual weed making it somewhat easier to kill than a perennial. The key is to catch it early before it blooms and sets millions of seeds in its small, cigar-shaped seed pods. When you pull those in the spring, the capsules pop open and scatter seeds far and wide, making the problem even worse next year. Chickweed is the other small-leafed weed. Another annual, but it does spread. A sharp hoe can handle them fairly easily, getting rid of them before they reproduce for next season. Spot-spraying with an herbicide containing glyphosate (Roundup) can also work, but you need to spray only what you want to kill and not get any spray on flowers or shrubs. I prefer the hoe. Dandelions are perennial weeds and quite tenacious, with a fairly strong taproot. If you leave the root, it will come back. Luckily, all of the weeds mentioned are actually edible plants as well as weeds, so you might want to forage. 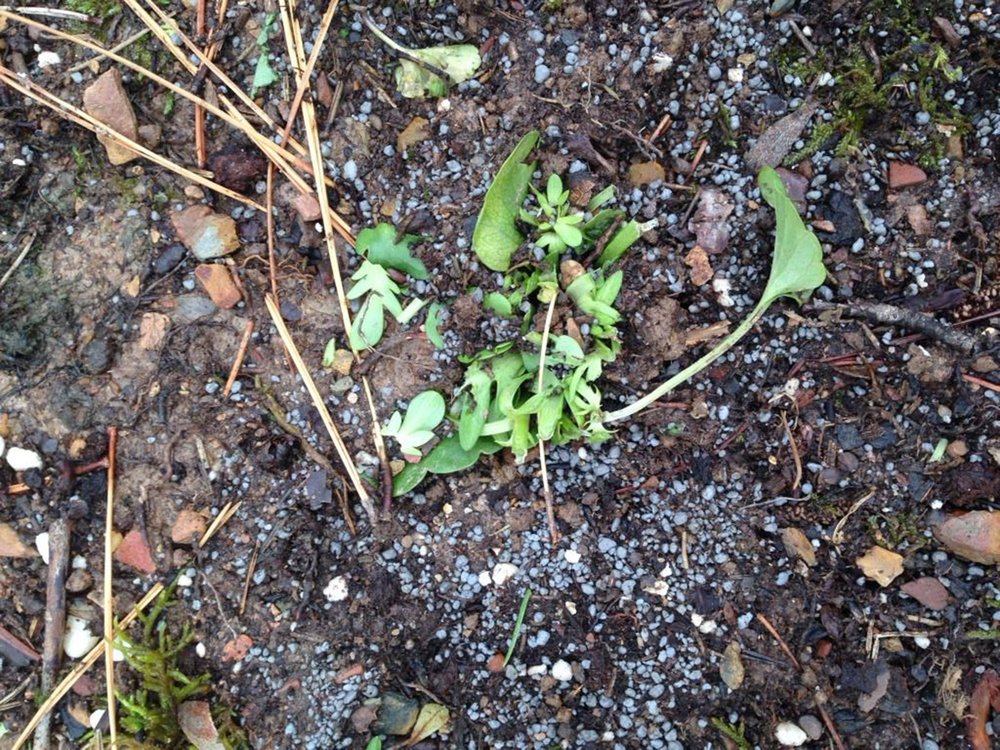 Something has been snacking on these pansies in a reader's garden. (Special to the Democrat-Gazette)

Q Something is destroying my pansies! I have planted many pansies every year and have never encountered this problem. The plants appear to be cut off within a few days of planting. First the blooms disappear, then the leaves right down to the ground. I have replanted twice, and stopped with the holidays. I saw some at the nursery yesterday and was considering buying more, but would hate to lose them again. We do not have deer in our area, but my yard is full of squirrels and chipmunks; but they have never eaten them before. We had rabbits in the yard in the spring, but I have not seen one in months. I have tried an animal repellent but it had no effect. Any thoughts?

A You definitely have a hungry animal eating your pansies. Rabbits are the more likely culprit, but squirrels and chipmunks can eat pansies as well. There are many repellents on the market, and some work for some people, but nothing is 100% effective on every animal pest. You can put a physical barrier over the plants to let them get established and deter the animal, but that is not the most attractive thing. You can put out a Havahart trap and see what you catch. You might also consider planting some pansies in an elevated container. If it is squirrels, they will eat those too, but it should limit rabbit or chipmunk damage.