No jail for farmer in dicamba misuse 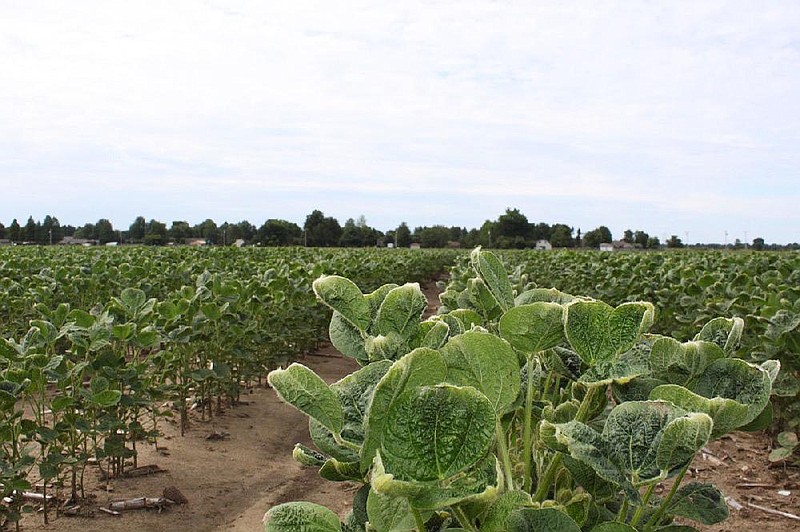 Soybeans in a Mississippi County field show signs of herbicide damage in this photo taken in June 2018.

A southeast Missouri farmer will face no jail time, but his farming entity must pay $200,000 as part of a plea deal in a case in which he originally faced 49 counts of violating federal pesticide law.

Bobby David Lowrey of Parma, Mo., pleaded guilty Thursday in federal court in Cape Girardeau, Mo., to two misdemeanor counts of misapplication of a pesticide. It's his second guilty plea in federal court since 2016, the first relating to crop-insurance fraud.

An indictment of Nov. 13, 2018, charged Lowrey with 49 counts of illegally spraying dicamba across his soybeans and cotton, three counts of obstruction of justice, and one count of making a false statement. Conviction on all counts could have brought a prison sentence of up to 20 years and fines of up to $250,000.

His farming entity, Lowrey & Lowrey Inc., faced the same charges but pleaded guilty to two misdemeanor counts of misapplication of a pesticide and one felony count of making a false statement.

A plea bargain has been in the works for weeks, or since an October trial date was canceled, according to court records.

U.S. District Judge Rodney W. Sippel sentenced Lowrey to 60 days' probation and home confinement and ordered him to pay a $10 "assessment," as opposed to a fine or restitution.

Sippel ordered Lowrey & Lowrey Inc. to make a "community service" payment of $200,000 to the Missouri Department of Agriculture. The payment was due upon sentencing.

Lowrey farmed about 6,700 acres of soybeans and cotton around Parma, a small farming community about 35 miles northeast of Piggott.

Investigators with the federal Environmental Protection Agency claimed that Lowrey illegally sprayed dicamba across the top of his soybeans and cotton in 2016. At the time, the EPA had not approved any of the new formulations of dicamba for use on soybeans and cotton after the plants had emerged.

Monsanto, now owned by Bayer, developed dicamba-tolerant cotton and soybeans but released the new seeds without having yet gained EPA approval of a new dicamba formulation that was supposed to be less susceptible to off-target movement.

Under pressure from pigweed and other weeds that had grown tolerant of glyphosate, some farmers sprayed older, more volatile formulations of dicamba that were registered by the EPA only for use at "burn down," or preplanting.

The EPA said Lowrey's actions damaged neighbors' crops that weren't tolerant of the herbicide. Regulators in Missouri, Arkansas and other states have received thousands of complaints that dicamba use over the past three years has damaged other varieties of soybeans and cotton that aren't tolerant of dicamba, as well as fruits, vegetables and other vegetation.

The EPA and the U.S. attorney's office said Lowrey and his farming entity falsified records, to show that no dicamba was sprayed.

Lowrey in August 2016 was sentenced to 24 months in prison for fraud, his attorney, Curtis O. Poore, of Cape Girardeau, said in a sentencing memorandum released Thursday.

That indictment alleged Lowrey falsified documents and committed wire fraud in receiving more than $400,000 in federal crop-insurance payments between 2007 and 2012. Lowrey pleaded guilty to two felony counts of making false statements, one felony count of theft of government property, and one count of felony wire fraud.

The EPA's prosecution of Lowrey is apparently the only criminal case related to dicamba, although dozens of civil lawsuits against Monsanto and other dicamba manufacturers have been filed in state and federal courts by farmers.

Poore said Lowrey's actions in 2016 harmed no one, because any crops damaged by dicamba that summer recovered from it.

Lowrey was freed from federal prison in February 2018 for the fraud conviction and was placed under three years of supervised release.

"The media coverage, the home confinement and the financial penalty all serve as just punishment and reflect the seriousness of this offense," Poore wrote of Thursday's plea bargain.