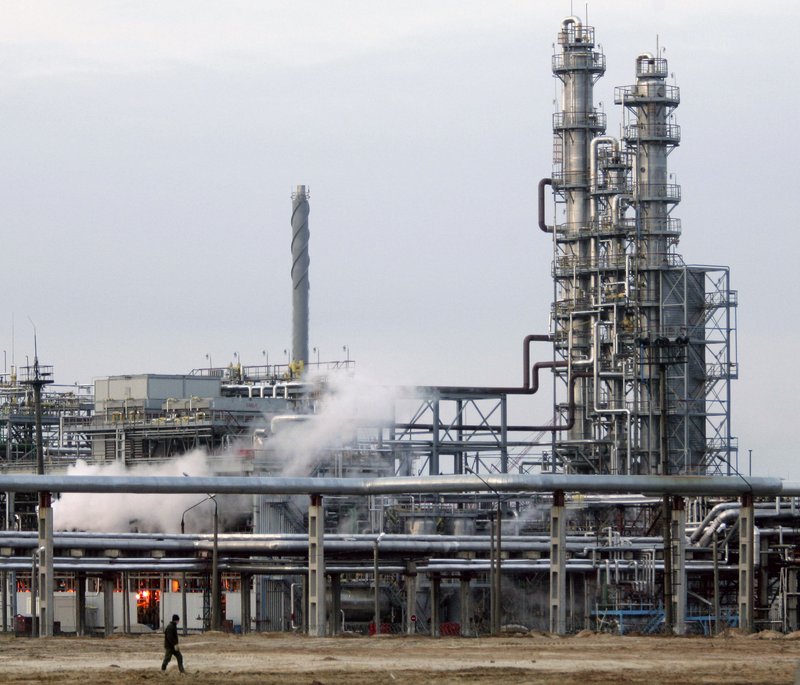 MINSK, Belarus -- Russia has halted oil supplies to Belarus as talks on strengthening economic ties remained stalled over concerns that Russia could effectively swallow up its neighbor.

In a case that has echoes of Russia's relationship with Ukraine before it annexed the Crimean Peninsula, Belarus' state-owned oil company said Friday that Moscow has stopped supplying crude until contracts for this year are drawn up. Belarus' two main refineries were operating at low capacity, running on reserves.

Russian oil company Transneft confirmed the suspension, which does not affect oil transit to Europe or the supply of natural gas.

Later on Friday, Belarus suspended its oil exports, which contribute up to 20% of annual GDP. State-owned oil company Belneftekhim said there were enough reserves to cover the country's needs.

But it has one point of leverage: Russia depends on Belarus to ship oil to wealthier markets in the rest of Europe. About 10% of Western Europe's oil supplies come from Russia, via a pipeline transiting Belarus.

The Kremlin has recently increased pressure on its ally, raising energy prices and cutting subsidies. It argues that Belarus should accept closer economic integration if it wants to continue receiving energy resources at Russia's domestic prices.

Russian President Vladimir Putin and Belarusian President Alexander Lukashenko held two rounds of talks in December, but failed to reach an agreement on deeper integration and on oil and gas prices.

Putin said Russia was not ready to "subsidize" energy supplies without a closer economic integration with Belarus, and Lukashenko insisted he would not sign off on the integration until the issues with oil and gas supplies were resolved.

In late December, Lukashenko ordered his government to look for alternative oil suppliers, though in practice that will be difficult considering the country's near-total reliance on Russia.

There are concerns in Belarus that the economic discussions are a plot by Russia to swallow up Belarus. Those concerns have been fueled by Russia's 2014 annexation of Ukraine's Crimean peninsula and its support for separatist insurgents in eastern Ukraine.

Before relations soured completely with Ukraine, Russia had likewise used energy supplies as political leverage to keep the country in its economic orbit and from developing closer ties with Europe.

There also has been speculation that Putin, who has been in power for nearly two decades, could contemplate a merger with Belarus as a way to stay at the helm of the new union state of Russia and Belarus after his current Russian presidential term expires in 2024.

Lukashenko repeatedly rejected the idea, vowing that his country would never become part of Russia.

"Russia has started to strong-arm Minsk by trying to get Belarus' Soviet-style economy off its oil needle, but Lukashenko is fighting really hard, as he doesn't want to become a Russian governor," said Alexander Klaskovsky, a Minsk-based political analyst.

Information for this article was contributed by Daria Litvinova of The Associated Press.