Arkansans rally against war with Iran 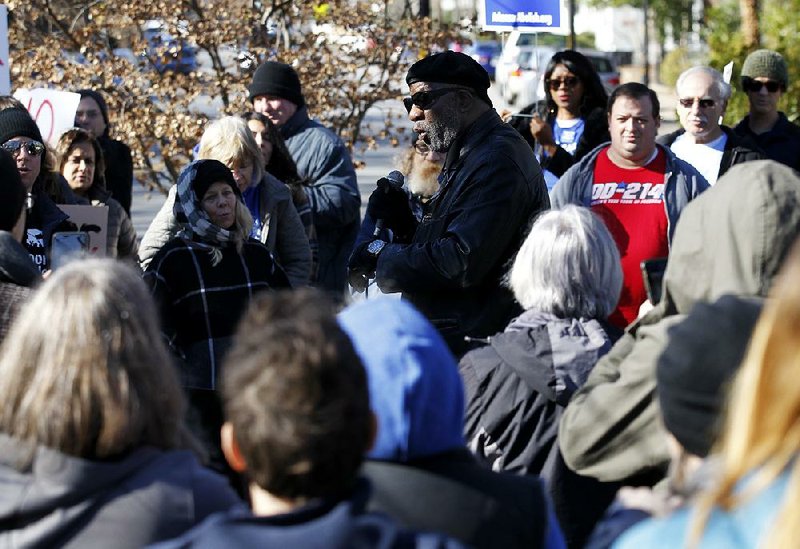 Judge Wendell Griffen (center) speaks to the crowd Saturday during an anti-war protest off Kavanaugh Boulevard in Little Rock.

Demonstrators in Little Rock and Northwest Arkansas joined others around the country and in England, Germany and Canada taking to the streets Saturday to protest the U.S. killing of Iran's top general and to urge restraint by Western governments.

Jennifer Kawatu stood along Kavanaugh Boulevard in Little Rock, holding a piece of white poster board with two words painted on it -- "No War."

She stood close to the street to ensure she was the first anti-war demonstrator that motorists saw as they traveled west along that street.

Horns honked at her in a show of solidarity. People gave her a thumbs-up and locked eyes with her.

The crowd behind Kawatu swelled to more than 75 people Saturday morning -- all of them showing their opposition to Friday's targeted airstrike that killed Iranian military commander Qassem Soleimani in Baghdad. Iran has promised "harsh retaliation" for that killing.

Saturday's No War With Iran rally was organized by the Arkansas Coalition for Peace and Justice, Pax Christi Little Rock, World Beyond War and other advocacy groups. Several of the demonstrators said Friday's drone attack was an ill-advised act of war at a time when public opinion is reflecting an American desire to end the ongoing military intervention in the Middle East and Afghanistan.

President Donald Trump followed the Soleimani assassination by sending an additional 3,500 soldiers to the Middle East in anticipation of heightened tensions there, according to The Washington Post.

"I'm just appalled that the United States is the aggressor here," said Kawatu, 47. "I felt compelled to leave my house and come here and say something."

A second demonstration in Little Rock was held Saturday afternoon in the River Market District. An even larger demonstration, consisting of roughly 100 people, was held in Fayetteville outside the Washington County Courthouse. That one was organized by the OMNI Center for Peace, Justice and Ecology, as well as the Arkansas Nonviolence Alliance.

"I believe in defending, but I don't believe in going overseas and engaging in these wars that are not about freedom and democracy," said Abel Tomlinson of Fayetteville, founder of Arkansas Nonviolence Alliance. The cost is too high financially and in terms of lives affected, he said.

A few of the Kavanaugh Boulevard protesters Saturday were born in the Middle East, including Max Sharifi, a local scientist and native of Iran.

It distresses him "a lot," he said, that the United States has been fighting wars overseas for nearly two decades and is risking starting another conflict with another country.

"I don't see any reason to start another war when this money can be spent on way better things, like education," the 37-year-old Sharifi said.

While some sign-holders kept their attention on the passersby, most of the protesters formed a semicircle and listened to a series of speakers. Among them was Pulaski County Circuit Judge Wendell Griffen, who has participated in various public protests during the past few years, many pertaining to the death penalty.

Griffen told the crowd that he joined the U.S. Army in 1973, the same year U.S. forces withdrew from Vietnam. He said the war in Vietnam and subsequent wars in the Middle East were based on "lies that were told" by the U.S. government.

"How many more people must die for our [government's] lies?" Griffen yelled into a microphone.

Katherine West of Arkansas Women's Action for New Directions said the U.S. seems bent on starting and not finishing wars, and she called that "crazy."

There were no opponents to Saturday's anti-war demonstration on Kavanaugh Boulevard.

Nationally, crowds chanted in New York's Times Square. In Chicago, about 200 protesters gathered outside the Trump International Hotel and Tower. About 500 demonstrators took to the streets in Philadelphia.

Anti-war protests also took place in Berlin and in the Canadian cities of Toronto and Ottawa.

Richard Burgon, a candidate for the party's deputy leader post, said war with Iran "risks a new full-scale war in the Middle East that could spiral out of control."

Information for this article was contributed by Mary Jordan of the Northwest Arkansas Democrat-Gazette; and by Sophie Wingate and Bill Smith of dpa. 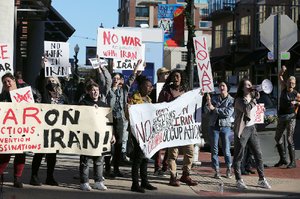