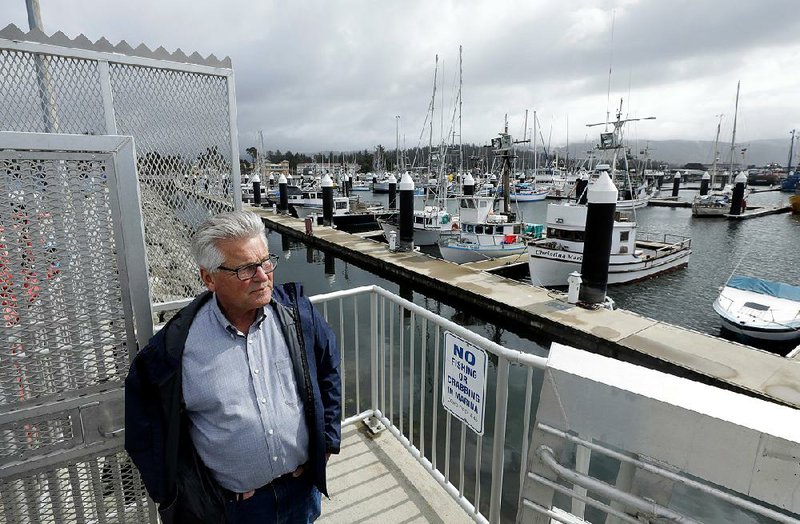 Charlie Helms, the harbormaster for the Crescent City Harbor District, is trying to get funding for a Tsunami Experience Center that also would serve as an evacuation site. The harbor was damaged by a 2011 tsunami. (Los Angeles Times/Myung J. Chun)

CRESCENT CITY, Calif. -- Alex Fallman sucked down a martini and sliced into a ribeye steak, greeting fellow diners at the Good Harvest Cafe by name.

Three years into his job as a city councilman, Fallman's take on this Northern California harbor town was not that of a civic booster. His words unspooled like a dirge.

Crescent City is a land of wild beauty, where towering redwoods meet quiet, foggy beaches. It's also a place of economic despair. As with many small California towns, its downtown is marked by empty storefronts. Homeless men shoot methamphetamine in the beachfront park.

Nearly one-third of residents live below the poverty line -- double the state and U.S. average. The median annual income of $27,029 is less than half the state median.

But city leaders have not given up hope. The future of their isolated town lies not in fishing and the long-gone logging jobs that once defined it, they say, but in tourism -- even of the dark variety.

And so they have embraced their boogeyman: tsunamis.

Forty-one tsunamis have smashed into Crescent City since 1933, according to Humboldt State emeritus professor of geology Lori Dengler.

In 1964, Crescent City earned the nickname Comeback Town, USA, after a tsunami killed 11 people and destroyed 29 city blocks, forever transforming downtown. Some say a comeback never really came. Since then, tsunamis repeatedly have wrecked the harbor and the economy.

There are several reasons the town is uniquely susceptible to tsunamis, Dengler said, including exposure -- it is low-lying and juts out into the Pacific -- and the bowl shape of the continental shelf, which traps tsunamis' energy and bounces waves back and forth.

"It does sort of get you on the map, sort of like Tornado Alley," said City Manager Eric Wier, who has a sign in his office for Tsunami Way, a nonexistent road name he thinks would be catchy. "When you are here, you need to be aware of tsunamis. We have a great history. Come learn about it. But also know, if something happens, where you should go."

There's an official Tsunami Walking Tour of downtown. But it can be bleak. One metal kiosk has pictures of people gathering at a creek in 1964 as bodies are being recovered.

At the Crescent City Harbor, which was damaged by a tsunami in 2011, the harbormaster is trying to fund the building of a Tsunami Experience Center, which would function as a vertical evacuation center -- and tourist draw.

Some city leaders see hope in Crescent City being designated in 2018 as an economic "opportunity zone," qualifying it for federal tax breaks meant to spur investment in poor communities. But so far the program has not brought investors, city officials said.

Fallman believes one of the city's best opportunities is its sister city relationship with the similarly tsunami-prone Japanese city of Rikuzentakata, which has spawned a children's book and trips to Japan by local politicians and students.

The partnership formed after a barnacle-covered fishing boat from Rikuzentakata, which had been bobbing in the Pacific Ocean for two years after a tsunami, washed up on Crescent City's shores in 2013.

The relationship will be featured in an NBC Sports segment set to air during the 2020 Tokyo Olympics. Last month, the City Council and Del Norte County Board of Supervisors, believing the feel-good segment will send visitors flocking, agreed to help fund a $59,000 marketing consultant to help, among other things, train the public for "what to do when media show up in town."

An exasperated Fallman said people had complained about the sister city partnership, saying it was a waste of money.

"This can be a pretty stuffy, conservative, why-are-you-bothering me town," he said. "People are very much set in their ways, and that comes out in their politics."

Fallman has juggled being a councilman with being a student at Humboldt State, driving 160 miles round trip to classes. He ran for office because the problems here were personal: His mother was addicted to painkillers and sometimes used methamphetamine. She couldn't get addiction treatment resources here, so she moved to Oregon, where she got sober, he said.

"She said, 'If I stay in Del Norte County, I'm going to die,'" Fallman said. "A community shouldn't be a place where people go to die. Nobody should ever say that about my home."

The population of Del Norte County declined 2% from 2010 to 2018, according to a Los Angeles Times analysis of census data. In Crescent City, inmates at Pelican Bay State Prison boost the population to about 7,000.

Del Norte County Supervisor Gerry Hemmingsen, 67, grew up here, in an era when "it was really unusual not to see a logging truck on the road." The psyche of the community changed, he said, after the closure of most mills in the 1970s and '80s following the creation of Redwood National Park.

"People had a purpose," Hemmingsen said. "They had a better feel of themselves. We've gotten away from that. We're turning more to a tourist-type industry, which I'm not saying is bad, but I don't think it's a sustainable economic thing to have year-round."

Hemmingsen was 11 when the March 1964 tsunami, triggered by a magnitude 9.2 earthquake in Alaska, smashed into Crescent City, cresting at nearly 21 feet and washing scores of buildings off their foundations. Victorian-style downtown buildings were replaced by drab 1960s-era storefronts. Empty lots remain to this day.

Getting to Crescent City, a 6½-hour drive north of San Francisco, can take some doing. Most visitors either fly into Medford, Ore., and drive at least two hours through dense redwood forests, or fly into the Humboldt County Airport in McKinleyville and travel a 70-mile stretch of Highway 101 that includes a segment called Last Chance Grade, which is crumbling into the sea.

But there's a balance, Wier said, to both wanting to draw people in and maintaining the special quietness of rugged, uncrowded beaches and ancient redwood forests.

"Remoteness is a huge benefit, and it should be a huge attraction," Wier said.

On a recent day, Wier led a town hall meeting at the Crescent City Cultural Center, with some 50 attendees sharing ideas for a makeover of Beachfront Park. The city, he said, is vying for grants from Proposition 68, which authorized $4 billion for state and local parks and water projects in 2018.

People were optimistic about a possible amphitheater, a labyrinth and events with food trucks and music by the water. But one woman said she kept finding needles in the park. Another said she stopped taking her four young kids because it felt unsafe.

James Lovett came to support the building of a biking pump track, which he thinks would keep young people active and draw mountain bikers. His family travels five hours round trip to Bandon, Ore., to ride trails.

"There's trails outside of Eureka and Shelter Cove," he said. "We're kind of in this dead zone in the middle where we really have nothing going on. Our community's kind of closed-minded by nature. Just inherently. None of them want much change."

Charlie Helms is one of the people who wants to find a way to change the town's fortunes. The harbormaster is trying to get funding for a $10 million to $12 million vertical evacuation center with open construction and breakaway walls on the lower levels and a helicopter pad on the roof. Evacuees would be at least 48 feet above ground level, he said. The building, he said, would doubly function as a Tsunami Experience Center, with a museum, 4-D theater and coffee shop.

Helms said he recently got scolded by someone trying to recruit doctors to the city who told him to stop talking about tsunamis. But Crescent City, he said, is at a "weird crossroads of disaster prep and drawing people in."

"If I can get the tsunami center, there would be 15 to 20 decent jobs and a reason for people to stay in town," Helms said. "Because, you're young, you go away to school, what are you going to do with your degree when you come back here? Nothing. It's sad."

Mia Dawn Ansell opened a boutique gift shop downtown this spring. She called it Tsunami Beach Company. Her store sits in the inundation zone, but she tries not to think about it. In fact, she thinks Crescent City should change its name to Tsunami Beach to draw visitors.

There's no reason this shouldn't be one of the charming beach towns California is known for, like Monterey or Santa Cruz, she said. As rain pelted the windows of her shop, she pointed to two empty buildings across the street.

"I can just see a little deli. Or a little bistro. Can you imagine? With little benches and with Christmas lights strung across.

"Someday, somebody will step up and do something. ... If I put it out to the universe, eventually it'll come back, right?"

Information for this report was contributed by Priya Krishnakumar and Sandhya Kambhampati of the Los Angeles Times.