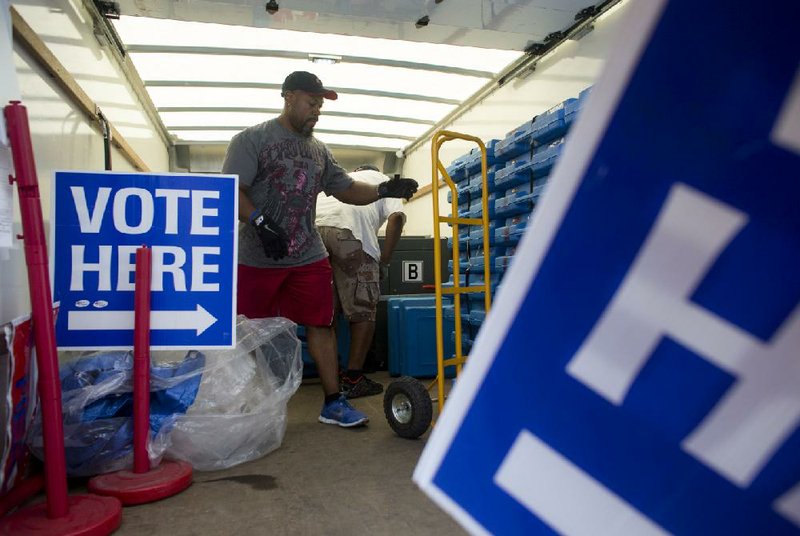 In this 2014 file photo Hakeem Jordan with the Pulaski County Election Commision unloads ballot booths, signs and counting machines from a truck.

As an election year begins, Pulaski County has yet to complete its planned purchase of new voting equipment to replace an inventory of aging machines.

Some ambiguity around funding has slowed the process for the state's largest county by population, tightening timelines in advance of November's general election that includes the vote for the presidency.

Officials learned last fall that they won't need to provide a match to access about $1.56 million in state funding to replace dated voting equipment, but election commissioners said in December that they're not expecting a buy until at least February.

Commission chairwoman Evelyn Gomez said the board prefers to first ask the Quorum Court -- likely next month, though an appearance is not scheduled -- if the county can dedicate any carryover funds to the purchase.

"We can't move forward until we have a budget," Gomez, who is a Republican appointee, said at a Dec. 20 commission meeting. "We cannot contract with money we don't have."

Pulaski County is among 21 counties set to receive a total of $8.2 million in state funds to replace voting equipment that's past its prime. Allocated through Act 808 of 2019, the money came from a property tax relief trust fund surplus.

As of last week, 10 of those counties said they expect to have new equipment in use for the March 3 primary, when Arkansans will cast their first votes for presidential and other candidates.

But as late as September, Pulaski County election commissioners said new equipment for the primary was not in the cards.

Since then, there's been scant movement on the subject. The most recent meeting about new equipment was in early November and included the county judge, the clerk's office, the secretary of state's office and the election commission.

Elections Director Bryan Poe told commissioners in December that he'd met with a representative from Secretary of State John Thurston's office at the behest of Pulaski County's County Judge Barry Hyde to restart the conversation.

The anticipated $1.56 million in state funding, plus $300,000 in appropriated county funds, should cover the purchase of tablets to check in voters, plus ballot scanners and printers, Poe said. He suggested moving forward and using any carryover funds, which he said could range from "hardly anything" to hundreds of thousands of dollars, for a later supplemental purchase of ballot markers.

But Gomez said commissioners want to see verification of the $300,000 in writing, adding that there had been confusion about similar matters in the past, and that board members would wait to appear before justices of the peace.

"Even if it is only a couple hundred thousand dollars [in carryover funds], that's enough to make a difference," she said.

Commissioner Joshua Price, a Democratic appointee, said in a later interview that while he's comfortable waiting until next month for a Quorum Court presentation, he's eager for a timeline for the purchase to be put in place. It's expected to take about 30 days for the equipment to be delivered, he said.

He pointed out that members of the public and poll workers need time to practice using new machines. (Some of the county's current equipment dates back to 2001.)

"I would hate for [poll workers] to go into a November general presidential election in 2020 -- which is going to be huge -- and they didn't have all the time to train that they could have had," he said.

County and Circuit Clerk Terri Hollingsworth, who is in charge of registering voters, said last week that she was "very concerned" that the equipment has not been purchased, noting that she had seen several different cost estimates.

"I think we actually need a plan," said Hollingsworth, a Democrat.

Hyde, a Democrat who is the county's chief executive, agreed in a phone interview that there is some urgency in the situation, though he has "complete confidence" in the current machines' ability to perform in the primary.

He said state funding plus the $300,000 -- appropriated through the county's 2020 budgeting process for new electronic poll books -- should suffice to replace existing voting equipment.

"We need to get this equipment ordered so it's sitting in a warehouse waiting for us to complete the primaries ... so that come next November, it's a solid, smooth operation," Hyde said.

"For some reason, it appears that the election commission doesn't want to take Step One."

Both of those changes were made to help reduce crowding at the previous polling sites.

Precinct 114 voters, who vote at the Arkansas Arts Center, will have their polling site temporarily moved to the Historic Arkansas Museum on Third Street while the art museum is closed for renovations.

Voters in Precincts 106 and 107 will move to Calvary Baptist Church on Cantrell Road from Little Rock Fire Station No. 10 on Kavanaugh Boulevard.

Climate-control problems made it hard to keep poll workers at the fire station location, Poe told commissioners. More than 11,000 registered voters are affected by the changes.

Early voting sites also are being established at the Hillary Rodham Clinton Children's Library and Learning Center on 10th Street and at the John Gould Fletcher Library on Buchanan Street, both in Little Rock. That increases the county's total early voting sites from nine to 11.

Commissioners also are looking out for new potential early voting locations elsewhere in the county, such as near Maumelle and near McCain Boulevard, they said.

A variety of candidates will appear on primary ballots, including for county government, judicial, state legislative and congressional offices, as well as for the presidency.