Florida Ranch is a safari, with camels 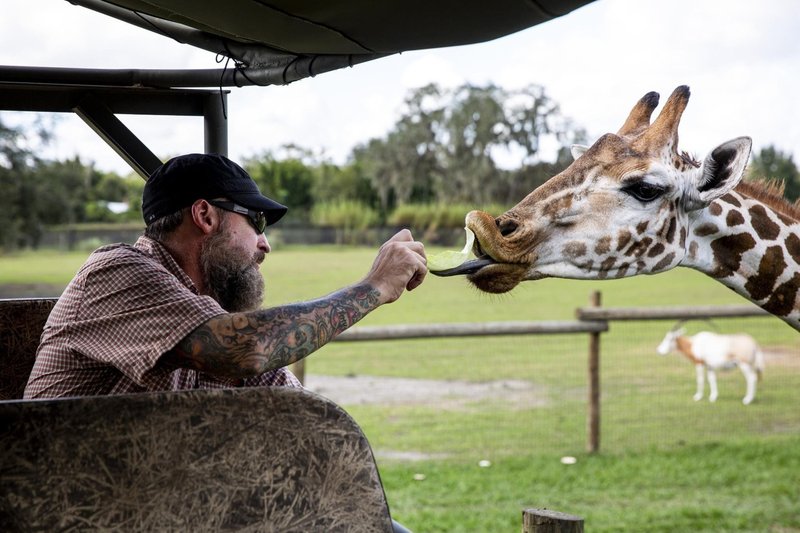 A giraffe enjoys a snack of cabbage provided by a visitor at Giraffe Ranch in Dade City, Fla. (TNS/Orlando Sentinel/Patrick Connolly)

During a recent expedition, I embarked on a safari complete with zebras, a rhinoceros, bongo, warthogs, ostriches and giraffes.

Our method of transportation? Camelback.

It might sound like something from the African savanna, but this all happened in Florida right outside Dade City, a little more than an hour west of Orlando.

Set off from the city and highway and sitting on 47 acres of rolling Florida countryside, Giraffe Ranch welcomes visitors who want to experience exotic animals up-close, offering a range of experiences for seeing and interacting with the ranch's inhabitants.

A covered-vehicle safari is available for $99, while an off-road Segway tour and llama tour (with the animals carrying guests' personal items) each cost $199.

The experience for which I opted was a camelback tour. After all, it's not every day you come across someplace that allows you to get on the back of a humped mammal.

Ready for the adventure ahead, I got on my camel Juan (directly behind a camel named Chewbacca) and received affectionate head nuzzles from the young camel Jewel behind me.

We set off and Lex Salisbury, co-owner of the ranch and tour guide, remarked to our group of four: "You guys look like a contemporary biblical scene."

Upon entering the ranch gates, animals — including ostriches, a zebra and antelope — meandered across the lush, grassy landscape. The creatures roamed freely and intermingled with one another, almost as it would be in the wild.

Salisbury rolled alongside the group, piloting a Segway x2 off-road model, detailing why an ostrich egg is so small, why many insects don't like to land on zebras and even the function of eyelashes.

As we meandered across the ranch aboard our camels, our group saw ancient oaks providing shade around the property, warthogs wandering in their pen and a massive Indian rhinoceros casting curious glances our way. 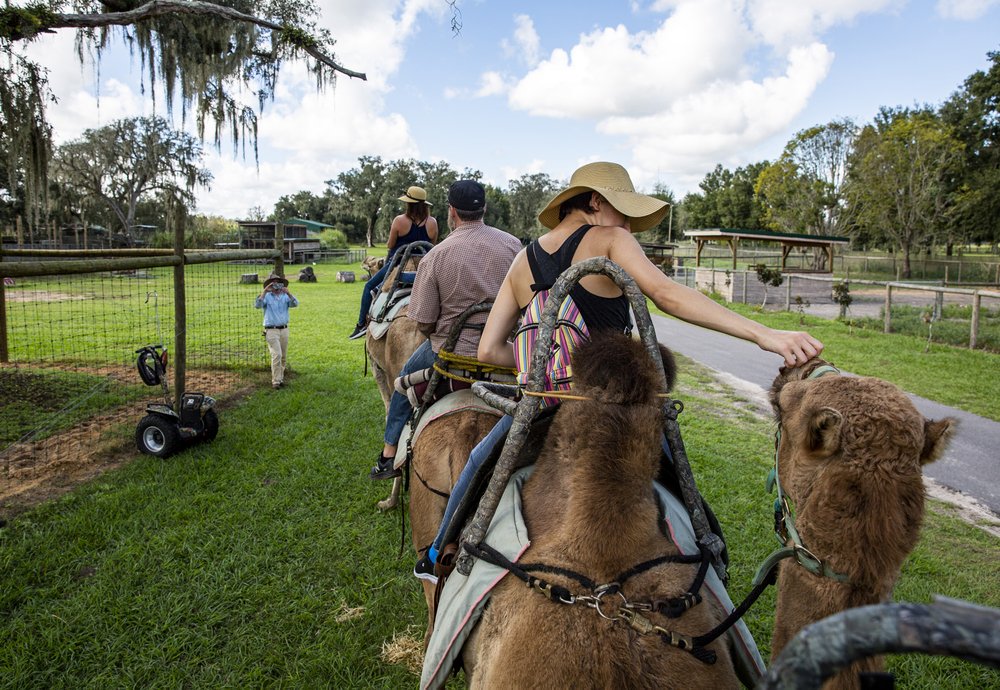 There's nothing overly flashy about the experience and yet it's appealing enough to draw tourists from around the country and world. According to co-owner Elena Sheppa, Salisbury's wife, the desire to connect with animals is deeply ingrained in humans.

"People are hard wired to want to see animals. We're animals," Sheppa said. "The farther people get removed from agriculture, the more they're in cities, the more compelling it is for them to want to interact with nature."

After our 40-minute ride wrapped up, Salisbury had our group hop on a safari vehicle for some close-up interaction with the ranch's namesake. It was time for the giraffe feeding.

I believe the animals knew what time it was, as one adult and two younger giraffes made their way to the fence line for snack time. They towered over our safari vehicle, especially the mature giraffe.

A long tongue reached out to snag cabbage leaves right from my hand.

As my cabbage supply dwindled, I couldn't help but take a few seconds to admire how close I was with such a gentle giant. The moment wasn't flashy like theme park fireworks, but it felt significant and amazing just the same.

Print Headline: Florida Ranch is a safari, with camels