The pointed arches of Gothic cathedrals allow for dramatic stained-glass windows, such as the ones in Chartres' cathedral. (Rick Steves' Europe/Dominic Arizona Bonuccelli)

Though visiting Paris' Notre-Dame cathedral won't be possible for the foreseeable future following a devastating fire, there are plenty of fine examples of Gothic cathedrals — and other Notre-Dames even — that you can see in France.

When traveling in France, I can't help but marvel at the towering Gothic cathedrals that mark the centers of many towns. I like to imagine what it was like to be a pilgrim 600 years ago, hiking for days to a particular church on a particular holy day — and feeling the awe when the soaring spire of the cathedral finally appeared on the horizon.

Nowadays, you can hop on a train in Paris and in an hour arrive in Chartres, home of arguably Europe's best example of pure Gothic. Officially known as the Cathedrale Notre-Dame de Chartres — it's one of more than a hundred churches dedicated to "Our Lady" ("Notre-Dame") scattered around France — it too experienced a harrowing fire, burning to the ground in 1194.

The Gothic style, which evolved in France in the Middle Ages from heavier Romanesque architecture, is marked by pointed arches (allowing churches to grow higher and more dramatic on the outside while making space for stunning stained-glass windows on the inside) and counterweight "flying buttresses" — stone beams that stick out of the church and support the roof by pushing back inward.

While mostly made of stone, many Gothic churches feature a wooden roof or spire, making them susceptible to fires. Amazingly, Chartres' cathedral took just 30 years to rebuild, astonishing when you consider it took centuries to build cathedrals such as Paris' Notre-Dame. What you see now is a unity of architecture, statuary and stained glass that captures the spirit of the 13th century (known as the "Age of Faith") like no other church of that era.

At the time of Chartres' fire, the church owned the veil supposedly worn by Mary when she gave birth to Jesus, making this small town a major player on the pilgrim circuit. While the veil was feared lost in the fire, it was found days later unharmed in the crypt and — whether miracle or marketing ploy — became the impetus to rebuild quickly. You can still view the veil, along with many statues dedicated to Mary, but the highlight for me is the Blue Virgin Window. The central window behind the altar, it shows Mary dressed in the famed "Chartres blue," a sumptuous color made by mixing cobalt oxide into the glass.

Beyond Chartres, you can find two classic examples of Gothic cathedrals in Normandy. In contrast to small-town Chartres, Rouen was France's second-largest city in medieval times. While its cathedral was also dedicated to Mary, it's more famous as a landmark of art history. Visiting today, you'll see essentially what Claude Monet saw as he painted 30 different studies of this Flamboyant Gothic (mid-14th century) facade at various times of day, capturing "impressions." You can see several of these paintings at the Orsay Museum in Paris.

The building you see today was constructed between the 12th and 14th centuries, though lightning strikes, wars (the cathedral was accidentally bombed in World War II), and other destructive forces meant constant rebuilding. Inside, you'll see a chapel dedicated to Joan of Arc (she was convicted of heresy in Rouen and burned at the stake in 1431) and several stone tombs that date from when Rouen was the capital of the dukes of Normandy (including one containing the heart of English King Richard the Lionheart). 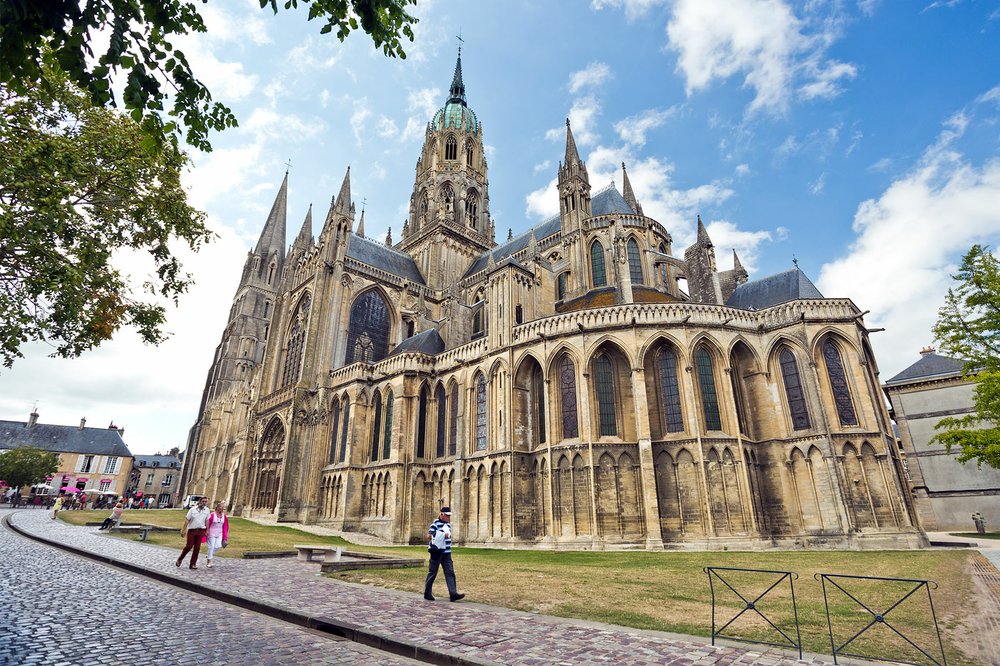 The centerpiece of a small town, Bayeux's cathedral is as large as Paris' Notre-Dame. (Rick Steves' Europe/Dominic Arizona Bonuccelli)

Bayeux's cathedral — as big as Paris' Notre-Dame — dominates this small town. Its two towers were originally Romanesque but later capped with tall Gothic spires, while the west facade is structurally Romanesque but with a decorative Gothic "curtain" added. Historians believe the Bayeux tapestry, the 70-foot-long embroidery telling the story of William the Conqueror's victory in the Battle of Hastings, originally hung above the nave.

Heading the other direction, the most impressive Gothic cathedral in eastern France is in Strasbourg, where its venerable church — also a "Notre-Dame" — is a true jaw-dropper.

This Gothic spectacle somehow survived the French Revolution, the Franco-Prussian War, World War I and World War II. The interior is worth savoring slowly, with its wide nave, exquisite gold-leaf organ, and elaborately carved stone pulpit. The marvelous stained glass, 80% of which is original, dates to the 12th century. The exterior, with its cloud-piercing spire (at 466 feet, it was the world's tallest until the mid-1800s) and red sandstone (from the 13th and 14th centuries), stands out from the other great Gothic churches in France.

Gothic churches are resilient. The ingenuity of design has meant France's great cathedrals have survived wars, fires and Mother Nature. While the country's most famous Notre-Dame in Paris is slowly repaired, there are plenty of other places to savor these dramatic architectural wonders.