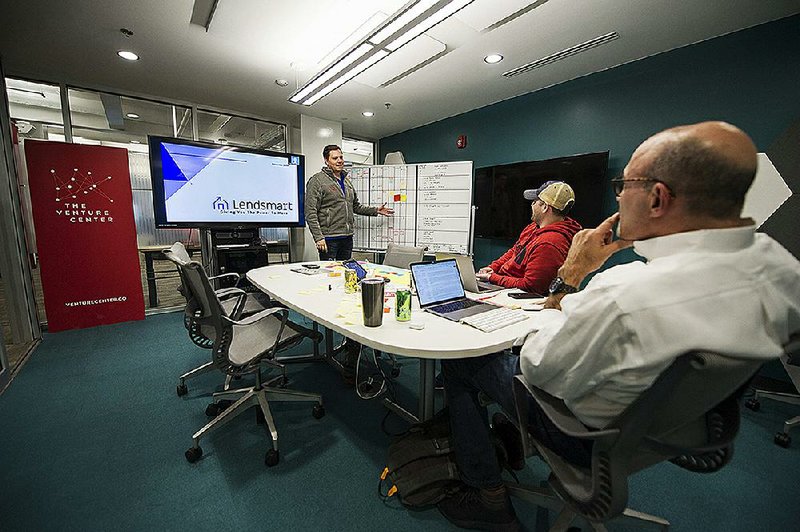 There has to be a better way.

That’s what A.K. Patel told himself after enduring the frustration of getting a mortgage application approved 18 months ago. Patel was familiar with the process and had a pretty good understanding of how it should work. Indeed, Patel estimates that, as experienced real-estate investors, he and his wife had gone through the process more than 20 times.

This one was different, and particularly annoying. “It didn’t make sense that a process that typically takes 60 days was taking longer than three months,” Patel said.

This week, the solution to that irritating mortgage problem is leading Patel and the co-founders of Lend-smart on a journey from Hoboken, N.J., to Little Rock. They will join nine other financial technology startups from as far away as Israel in the Independent Community Bankers of America Think-Tech accelerator program at the Venture Center.

The three-month program, entering its second year, begins Wednesday and ends in March. The 10 participants have developed products and services that address challenges community banks run up against in marketing, fraud prevention, data analytics and mortgage lending.

Lendsmart’s leadership team is coming to Little Rock to hone their offering and find customers. Patel evaluated other accelerator programs, deciding the ICBA ThinkTech was the right fit after a vigorous investigation and feedback from his professional network.

“We have a product that we believe is ready to be deployed, and we want to get it in front of as many community banks as we can,” he said. “We were advised that if our product is geared toward community banks, there is no other accelerator to be a part of than the ICBA program with the Venture Center.”

ICBA ThinkTech 2.0 hopes to build upon the success and momentum of the inaugural program by continuing to foster community bank financial technology, or fintech, collaborations that solve real-world challenges while enhancing customer experiences.

“We are on the cutting edge of developing how banking is done not only on a national basis but on a global basis — and we’re doing that here,” said Wayne Miller, executive director of the Little Rock Venture Center. “We have put Little Rock on the map as a meaningful hub for fintech innovation on a global basis.

“We work to make this interesting and relevant for the companies and to show them the very best that Arkansas has to offer while also giving them the resources they need to make their businesses successful.”

Support for the accelerator program and its participants has become a collaborative community effort involving the governor, state and local economic development officials and business leaders with experience in the financial technology and banking sectors who are willing to mentor early stage companies.

Arkansas, through the economic development commission, contributes $250,000 to help operate the accelerator program.

“This is an incredibly important program for the state of Arkansas,” Commerce Secretary Mike Preston said. “It helps get the word out there that we are a financial hub in the middle of the country. A program like this helps to raise the profile of our state and Central Arkansas in the entrepreneur and tech communities.”

The Independent Community Bankers of America represent about 5,000 small and midsize banks across the United States. It’s vital that those institutions deploy the latest digital products to compete with larger banks, but they often lack the resources to finance research and development efforts. That’s a gap the ThinkTech accelerator helps close.

Independent Community Bankers of America provides $1 million to support the initiative. Each of the 10 companies participating receive $75,000 in seed capital, and the Little Rock Venture Center receives $250,000 to “help keep the lights on,” said Tina Giorgio, president and chief executive officer of ICBA Bancard, the payments services subsidiary of the organization.

“The program we have with the Little Rock Venture Center is really unique,” Giorgio said. “They are passionate about community banking, and they understand the work we do for community banks. It was just a logical step to partner with them.”

More than 40 community banks will participate directly in the program, flying executives into Little Rock to sit alongside the entrepreneurs and give instant feedback on their offerings. It’s real-time mentoring that helps mold products to meet the specific needs of community banks.

“For our banks to remain competitive and a viable part of their communities, it’s important that we make these investments and develop the high-tech, high-touch services that consumers want from a bank today,” Giorgio said.

That interaction is critical to participants and speeds up development of a product that banks will pay for and use, according to Joe Ehrhardt, chairman and CEO of Teslar Software of Springdale.

Teslar participated in the inaugural ThinkTech accelerator in 2019, an experience that Ehrhardt says has been vital to the success of his company. “ThinkTech put us in front of bankers across the country who could honestly say: I would never pay that much, or I would never use that feature, but I love the idea and here’s what we can do with it.”

In fact, Teslar gained candid feedback that helped refine the company’s community banking offering. “We realized that our software was doing an amazing job helping lenders in the branch,” Ehrhardt said. “But community banks don’t want their bankers in the branch. Today, banks are sending their lenders out on the road to meet people.”

Teslar adjusted the product so it was accessible on mobile devices — a phone or tablet.

“We got feedback from banks who were not customers telling us this would revolutionize their business if we could provide a product that would work out in the field,” he added. “That was huge for us.”

That kind of input is exactly what Lendsmart needs, according to Patel.

Lendsmart contends its product offers community banks a smarter approach to lending by unifying underwriting with other aspects of the mortgage process through the use of artificial intelligence. The company projects its product can whittle a 60-day process down to 10 days.

For consumers, the product simplifies the homebuying journey and puts the key to a new house in their hands quicker. For financial institutions, Lendsmart integrates many aspects of the application and approval process, and the product can be easily fitted to feature a bank’s brand.

Though he has spent the past 18 months developing and testing his mortgage-lending product, Patel knows the real trial will come over the next few months as the offering is scrutinized by the bankers who will use it in the marketplace.

“Every bank’s tolerance for risk is different and every state is going to be different, so it will be amazing to get the feedback from multiple banks about what they need. We want to be 100% geared toward how they function,” Patel said. “We want to hand over to banks a fully ready product that works for them.”