Challengers in Arkansas House, Senate races asked: What votes did you disagree with?

The Arkansas House and Senate voted more than 1,000 times each on legislation this year, but only a handful of those votes are poised to become political fodder for the 2020 elections, according to an Arkansas Democrat-Gazette survey of legislative candidates.

Sixty candidates seek to oust incumbents from the state House and Senate in 2020, and the Democrat-Gazette attempted to reach all of them in the past month to ask what votes, if any, by the current officeholders they disagreed with. The newspaper was able to gather responses from four-fifths of the candidates running against incumbents.

In dozens of conversations, those challengers largely pointed to a small set of issues that divided the Legislature in 2019. Among the subjects most frequently singled out were the following (with the number of candidates who pointed to that issue in parentheses):

• A cut in the state's top income tax rate for high-income earners (9).

• Proposed (but defeated) exemptions to the voter-approved minimum wage increase (6).

• An increase in gasoline and diesel taxes to fund highways (6).

While those votes were most frequently cited as stirring discontent over an incumbent's record, many candidates also pointed to a variety of other stances -- on bills on wide-ranging topics such as workers' compensation rights, the building of a parking garage and a resolution calling for a national constitutional convention.

Still, others expressed no quarrels with incumbents' voting records.

Of the 48 candidates who responded to the newspaper's survey, one in four could not point to any votes that their incumbent opponents' made that they disagreed with.

Janine Parry, a political science professor at the University of Arkansas, Fayetteville, called the results of the survey unsurprising.

State legislative candidates, Parry said, are often similar to voters in that they are motivated by "broad policy areas," while some view the Legislature as a stepping stone to higher-profile political careers. "Only a handful of people run because they are policy wonks," she said.

Most of the candidates who responded to the survey were able to point to at least one stance on which they disagree with their current representatives. With the first votes set to be cast in the March 3 party primaries, some votes have already been aired in campaign materials.

"If you're going to challenge an incumbent, you do it because you disagree with at least a part of their voting record," said Kendon Underwood, who is one of two Republicans running a primary challenge against state Rep. Jana Della Rosa, R-Rogers.

Underwood's campaign has printed cards listing six bills that sought to add harsher penalties and restrictions on sex offenders, each of which Della Rosa voted against. He accused the three-term lawmaker of a "pattern of protecting sexual predators." Della Rosa said the attacks on her record were a misrepresentation of her position, and "asinine."

"It's just thrown out there, and people don't really think about what would actually occur with it," Della Rosa said of the bills. "When I see things like that, I know they're going to look terrible on my voting record, and I know how they're going to be used against me. And I still vote against them anyways, because that's how you get laws in the state that drive people nuts that don't do any good."

Underwood's primary challenge against Della Rosa is a rematch of the 2018 GOP primary in District 90, which Della Rosa won by just two votes. The third contender in the 2020 primary, Chris Latimer, declined to speak to the Democrat-Gazette.

In other Republican primaries around the state, the wedge between incumbents and challengers frequently focused on 2019 votes on tax increases related to funding for the state's highways.

In the only primary battle between two current members of the Legislature, state Rep. Dan Sullivan, R-Jonesboro, said he would pit his voting record on those issues against the incumbent in Senate District 21, state Sen. John Cooper, R-Jonesboro. Sullivan specifically pointed to Cooper's votes on legislation that raised gas taxes and water fees; imposed a sales tax on online retailers; and referred a permanent extension of the state's half-cent sales tax to voters.

"Sen. Cooper voted for every or almost every tax increase that came before us," Sullivan said. "His only response to a problem seems to be to raise taxes."

In response, Cooper called Sullivan's criticisms "nonsense," and pointed out that his vote to raise gas taxes and refer to voters the half-cent sales tax continuance were both a part of Republican Gov. Asa Hutchinson's $300 million plan to fund state highways and roads.

"That's going to be extremely troublesome to the local communities and counties if [the sales tax is] not reauthorized because we're already in a declining maintenance situation with our highways," Cooper said. "Any further deterioration of that is going to be pretty dramatic for our counties."

Asked if Hutchinson would wade into primary contests on behalf of lawmakers who supported his highway plan and Medicaid expansion, his office released a statement in which the governor said there would be no specific "litmus test" to determine which incumbents the governor supports in primaries.

"I will be supporting the incumbent Republican because they have proven themselves to be a practical conservative who votes responsibly on lower taxes and pro-growth policies," Hutchinson said.

For Democrats seeking to oust Republican incumbents in the Nov. 3 general election, it was GOP-backed measures to cut taxes for high-income earners and attempts to carve out new exemptions to minimum wage increases that prompted the most frequent ire among challengers.

Act 182, which will cut the top income tax rate for Arkansans earning more than $80,800 this year, also gave smaller benefits to people in lower tax brackets. But Democratic candidates who opposed the tax cut criticized the cuts for offering the biggest savings to people outside the low- and middle-income tax brackets.

In House District 80, Democrat Lou Reed Sharp of Prairie Grove argued that most people in her rural district earned less than the $80,800 threshold for the biggest cuts. She criticized the district's incumbent, state Rep. Charlene Fite, R-Van Buren, for voting in favor of the cuts.

But Fite, who has represented the district since 2013, defended her vote by pointing out that lawmakers had cut taxes for low- and middle-income earners in previous legislative sessions.

Some critics of how lawmakers voted on the tax cut took issue with the opposite.

In Northwest Arkansas' House District 85, the vote by Democratic state Rep. David Whitaker of Fayetteville against the tax cut was singled out by his general election opponent, Republican Brian Hester of Farmington. Hester said "it was overwhelmingly approved through the House and [Whitaker] voted against it. As a conservative Republican, I am generally opposed to any tax increases and most taxes in general."

In an emailed response, Whitaker cast the tax cut as an example of the "failed notion" about trickle-down economics and said the revenue lost from the tax cut could have been put to better use.

"Perhaps the saddest aspect of the whole thing is that these high-end tax cuts further reduce revenues by an estimated $97 million," Whitaker wrote. "Our State's resources are stretched horribly thin as it is, while the people's needs increase daily."

In Central Arkansas, Ashley Hudson, a Little Rock Democrat running for a GOP-held seat in the city's western suburbs long coveted by Democrats, listed five votes cast by the incumbent, state Rep. Jim Sorvillo, R-Little Rock, some of which she called "unusual and inexplicable positions."

Like other Democrats, Hudson said she opposed House Bill 1752, a failed attempt to exempt small businesses and nonprofit groups from paying a higher minimum wage. The wage increase was approved by voters in 2018. Sorvillo was one of 29 Republicans who voted for the bill.

In addition, Hudson called out several occasions when Sorvillo voted "present" on appropriations funding for the state's Medicaid program and the Department of Emergency Management in 2019, and where he failed to register a vote on a bill to raise teachers' salaries. "He's simply not taking a position," she said.

Sorvillo said he voted "present" on the appropriations bills because he had lingering concerns about a federal court's review of the Medicaid expansion program's work requirement (it was later struck down) and with the amount of overtime pay at the Department of Emergency Management. He added that he was likely out of the chamber when the House voted on teacher pay raises, which he supported. "I apologize on that one," he said.

On the minimum wage exemption, Sorvillo defended his position.

"It's not that I am opposed to a minimum wage, but if it has an effect on a business where they have to reduce employees because of the increased cost ... then that would be my reasoning" for opposing it, he said.

Only two incumbent Democrats face challengers from within their own party this year. In the House, state Rep. Denise Ennett, D-Little Rock, took office to fill a vacancy in November. She hasn't had a chance yet to vote on a bill because the Legislature met in the first part of 2019 and will meet again in April.

In the upper chamber, state Sen. Stephanie Flowers, D-Pine Bluff, faces a primary challenge from Efrem Elliott of White Hall, in a rematch of the 2012 primary for the Democratic Senate seat. Elliott made no qualms about Flowers' voting record.

"We're going to beat her because our ideas are better," Elliott said, before adding, "I don't really know any votes that she has made."

More than a dozen candidates would not specify a vote by their opponents that they disagreed with. Most, like Elliott, explained that they had yet to research their opponents' records, or had broader issues with the incumbents' style of legislating.

"I have focused more on my campaign than going out and researching all of [state Rep. LeAnne Burch's] votes," said Howard Beaty of Crossett, a Republican running against the two-term Democrat from Monticello.

"At this point, I don't know what his record has been," said Democrat Rick Bransford of Lonoke, referring to his opponent, state Rep. Roger Lynch, R-Lonoke.

Others, like Republican John S. LaTour of Springdale, suggested that their lack of criticism was strategic.

"I'm not going to discuss that with you right now," said LaTour, who is running against state Rep. Nicole Clowney, D-Fayetteville. "I don't want to give my opponent a heads-up." 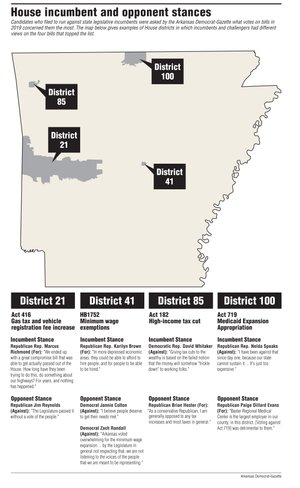