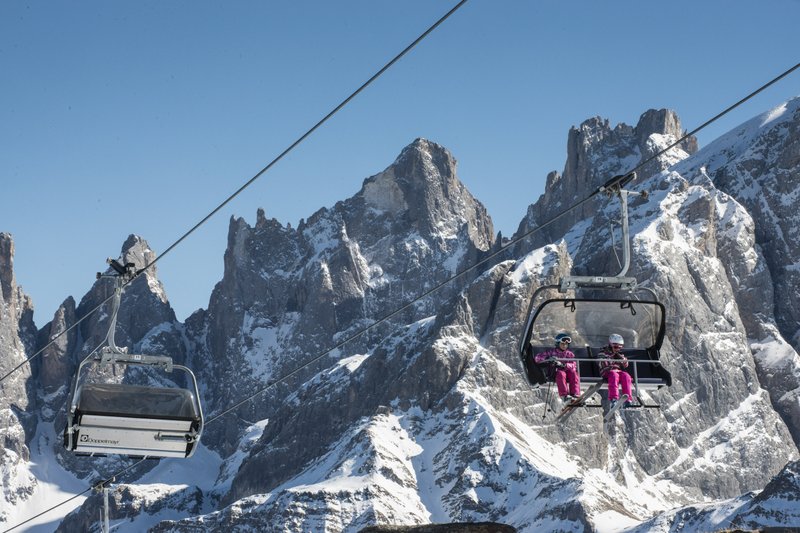 Every mountain is different, sure. But, the rhythm of most ski resorts is predictable. So, when I heard about a “ski safari” in the Italian Alps, that involved crisscrossing the scenic towns and valleys of places like Cortina, Civetta, Val Gardena and Arabba, then sleeping at a different alpine inn each night (sadly, no tiger tracking), I was intrigued.

On top of appealing to my daredevil nature, there was another selling point: I am a solid intermediate skier. In the United States, hut-to-hut skiing is a backcountry endeavor designed for experts. Not so in the Dolomites, a UNESCO World Heritage site in northeastern Italy. This territory of jagged limestone peaks, dipping plateaus and terrifyingly steep World Cup descents, I discovered, actually, boasted manageable terrain; 86% of the runs are red (intermediate) and blue (the easiest), ideal for nonelite athletes like me whose slope preferences are wide and easy groomers to couloirs, the narrow, hard-core gullies for advanced skiers.

Even better, the traditional Italian mountain huts called rifugios bore no resemblance to the bare bones huts of North America. They were cozy, family-run establishments celebrated for splendid views and cuisine that integrates the heartiness of South Tyrol with the refined flavors of northern Italy.

Hopscotching through the Dolomiti Superski, which, with a single pass, allows skiers access to 12 valleys with 800 miles of terrain serviced by 450 lifts, is complicated. A skier must organize transfers by bus or car to individual resorts, which are tucked into narrow mountain passes. Local tour operators began designing ski safaris, multi-resort ski days combined with rifugio stays, so tourists could experience maximum terrain minus the organizational hassle. Though ski safaris may sound like a marketing gimmick, these packages are increasingly popular in a number of countries, from France and Switzerland to Canada.

I signed on for a five-night safari with Dolomite Mountains (dolomitemountains.com), a company that offered professional guides and the ingenious perk of luggage transfers with its small group safaris. (The company has multiple iterations of the ski safari from December through mid April starting at $2,900 per person for five nights, six days). My suitcase — minus the bulky ski garb that I would be wearing all day, every day — was left in town. A duffel bag was provided to pack essentials (pajamas, toiletries, jeans and a sweater for dinner) for the nights spent at high-altitude rifugios. This bag appeared, snow-dusted, in my room.

The trip began in the tony village of Cortina d’Ampezzo, where my plan for a post-flight nap was foiled by the heady scent of leather wafting from Corso Italia, the pedestrian shopping street that lured me with “saldi” (sale) signs.

After a fitful first night’s sleep (jet lag, wine and altitude are an evil combination), I thought it a good idea to loosen up with a practice run before meeting up with the mountain guide. The Tofana ski area was not difficult, I was told, mostly blues and reds with a few advanced black runs. What could go wrong?

That morning, as I ascended the Freccia nel Cielo cable car, a dense fog gripped the mountain. It was a total white out when I stepped out onto Ra Valles, with an altitude of 8,202 feet. The signs that I had anticipated with directions to an easy warm-up run did not materialize. There was a sign that I missed, however, which read “piste for expert skiers.” I had ended up on run #151 — Pista Forcella Rossa, a 6,896-foot-long run between gullies with a steep 3,280-foot descent. Thankfully, a sweet Venetian in his mid-30s, took pity on me (rivulets of sweat streaming from my goggles may have tipped him off that I did not belong on this run) and guided me down Cortina’s steepest slope, stopping every few turns to make sure I hadn’t fallen.

Things got smoother once I met up with a guide later that morning. The sun burned through the fog and Cortina’s renowned landscape — the craggy, snow-capped spires of Col Rosa, Cristallo, Faloria, Sorapiss, Rocchette, Becco di Mezzodi — revealed itself. The carousel of pretty blue runs winding around the tracks of the 1956 Winter Olympics site in Tofana was a manageable pitch, much like the terrain of Vail, Colo., or Park City, Utah. Luckily, the ski safari has multiple guides so the speedier skiers could split off as I meandered at a slower pace. 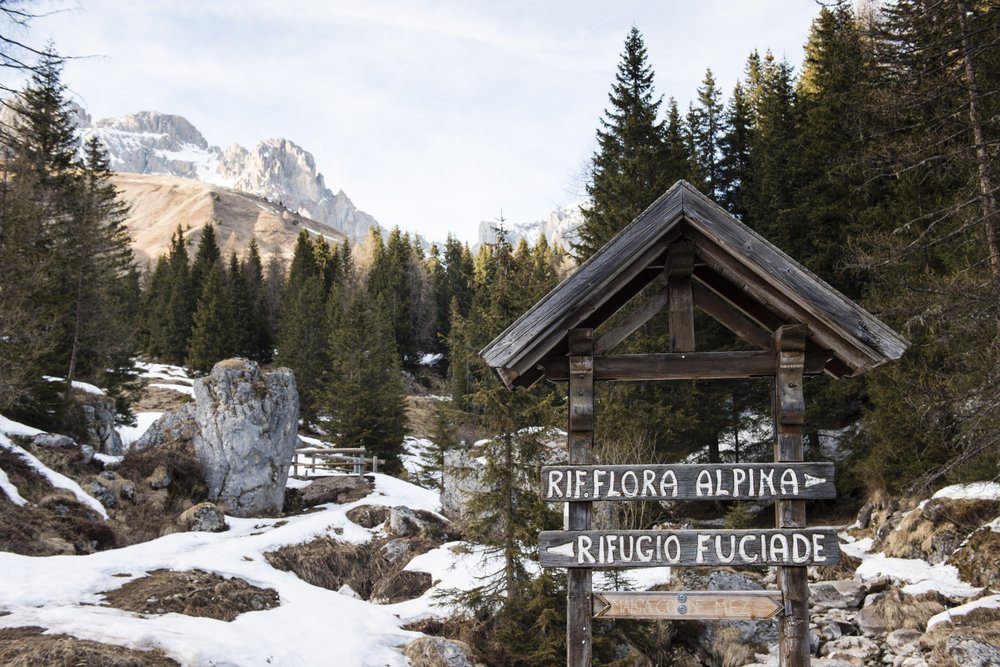 Signs point the way to various alpine inns in the Dolomite Range of northeastern Italy. The inns provide refuge for skiers on a ski safari through the region. (The New York Times/Susan Wright)

After lunch, I was exhausted and would have loved to call it a day. Here’s the challenge: During a ski safari, you can’t turn back when you get tired. First of all, there is no “back.” You are moving from resort to resort. And, unless you have booked a private tour, you are with a group following a set itinerary. You’ll have to kick back an espresso or two and motor on (though if there were a serious issue, the company would send someone to fetch you). I popped a square of dark chocolate in my mouth and punched through the fatigue, knowing that I could catch my breath on the forthcoming taxi transfer to Cinque Torri.

A chairlift and short run later, the snow began to fall and we arrived at Rifugio Averau (elevation, 7,916 feet) as the peaks of Civetta and the Marmolada glowed pink in the sunset. Ski boots were swapped for slippers and I headed three flights up to my room, a no-frills situation with twin beds and a nightstand. With such humble chambers, the polished, multi-course dinner that awaited was a delicious surprise: venison laced with lingonberry jam, roast deer with pine nuts and apples and potato gnocchi stuffed with ricotta and figs.

Waking up at dawn, I caught the breathtaking sunrise and, after a quick breakfast, popped on my skis and sailed out the door as fresh powder whispered underfoot. As we skied, the guide pointed out a rustic stone structure partially obscured by the snow. The Cinque Torri, he explained, was a defensive stronghold during World War I where the Italians had hewed bunkers into the mountains to monitor the Austrians and Germans. Thousands died in this “Guerra Bianca,” fought on mountain ridges in freezing weather. The building we had passed was a World War I bunker, one of many in the area.

We transferred over to the resort of Civetta, and after a few runs, I found my groove on the intermediate runs, bookended by snow-kissed pine forests. This area was my favorite. Its stunning vistas and old school vibe resembled one of the Slim Aarons’ glitzy photographs of beautiful people in beautiful settings. 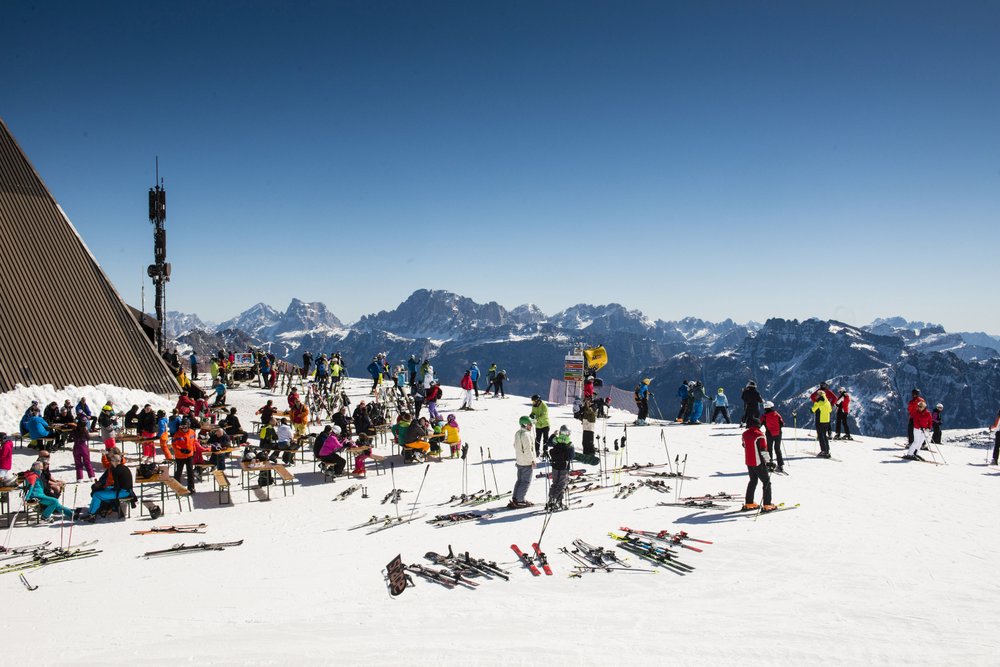 Skiers assemble at the Passo San Pellegrino, at the top of Col Margherita in the Dolomite Range of northeastern Italy. (The New York Times/Susan Wright)

We wound our way through the valleys of Alleghe, Selva di Cadore and Palafavera, and then down to the lost-in-time village of Val di Zoldo on creamy, untracked runs, bathed in splendid views of the Dolomites’ most famous peaks, Monte Pelmo and Monte Civetta.

Taking breaks was almost as much fun as skiing. On-mountain cafes brimmed with neon-clad skiers refueling with wine and hunks of Kaminwurz, a smoked South Tyrolean sausage. Grappa is part of the warming-up ritual. The rifigios blend their own elixirs, large anatomy class-like canisters with floating bits of fruit essence and herbs (juniper, pine, fir) knocked back as a shot. That afternoon in Civetta, I was informed that a shot of grappa could improve my speed. I think it worked.

A note on Italian ski culture: it’s strictly a do-it-yourself venture. The notion of a ski valet, as in the helper to hustle you into your warmed boots, bring your skis from storage to the snow and offer you a cup of hot chocolate as you step in from the cold does not exist. The horror. After renting gear in town, you’ll be responsible for schlepping everywhere — up to the gondola, onto the taxi roof for transfers, into the rifugio ski rooms.

There are also no roaming mountain “ambassadors,” a mainstay in American resorts, who assist with directions or help you get vertical after a face plant. But this is forgotten on the slopes. Enveloped in the storybook scenery, as lithe ski racers whiz by like birds in exotic Lycra plumage, you’re in the thrill of the moment.

By the third day, the ski areas — we hit three or four per day — began to blur; a continuum of dazzling slopes flanked by lunar-like rock formations that alternated in color from pale gray to fiery red as the sun moved overhead.

One spot, though, stood out. On a cable car to the popular lookout point Col Margherita, it looked as if smoke were rising from Pale di San Martino, the largest mountain range in the Dolomites. It wasn’t a fire. At 7,916 feet, we were above an inversion: ethereal cloud formations that occur at high altitude where lower temperatures gets trapped beneath warmer air. As I dropped from the lip of the summit to the piste, my head was literally in the clouds.

On that fine bluebird day, I came as close to “shredding the gnar” — ski parlance for speeding down the mountain — as a wobbly-thighed, AARP-eligible woman could, flying down the Ciampac piste as the Marmolada glacier glistened in the distance.

Lunch, on that fourth day and every day, was an hour-and-a-half feast. Meals kicked off with charcuterie boards laden with speck, Parma ham and soppressata. As dairy is the doyenne of the Dolomites, fragrant wedges of local Stelvio, Piave, Fodom and Bastardo del Grappa (accompanied by housemade jams) were essential to the antipasti course. Though this spread could have easily sufficed as lunch, it’s simply a precursor to “piatti tipici” entrees like pine nut-and-Gorgonzola-stuffed gnocchi; artichoke salad layered with walnut, pomegranate and Parmesan; and beef tagliata wrapped in speck. The saving grace of skiing six hours a day was indulgence without guilt.

The group spent its final night in the town of San Cassiano to catch early morning flights home. We assembled in the Finnish sauna of Hotel Rosa Alpina, as a sort of sweaty victory lap for our cardio marathon. Grueling at times, the trip had been an exhilarating fusion of recreation and alpine culture. Earlier that day, I had bought some South Tyrol chocolate to plant in my jacket. On my next ski jaunt, it will be a treat to reach into my pocket and taste the Dolomites.