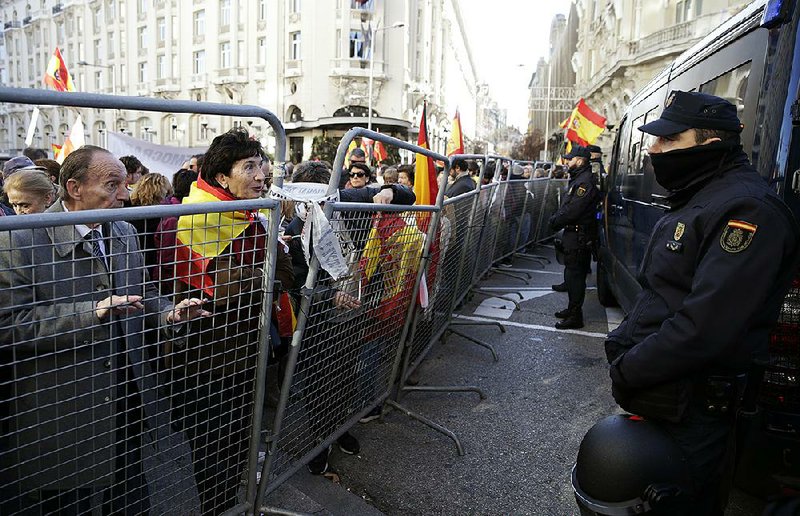 Sanchez's Socialist Party wants to form a coalition with the far-left, anti-austerity United We Can party for his next government but needs support from several smaller parties to gain the required parliamentary approval.

It would be Spain's first coalition government since the country returned to democracy in 1978, three years after the death of long-time dictator Francisco Franco.

Sanchez's proposal is not expected to clinch an absolute majority of 176 votes during a first round of voting set for today. Spain's three right-wing parties have already said their lawmakers would vote against it.

But the Socialists insist they have the votes needed to get the required simple majority in a second vote Tuesday to put Sanchez back in the Moncloa Palace, Spain's seat of government.

The Socialists have to rely on the goodwill of about 20 lawmakers who agreed to abstain. Those include the 13-deputy regional Catalan ERC party, one of the groups that want independence for Spain's Catalonia region.

ERC's support was put in doubt after Spain's National Electoral Board ruled against two leading Catalan separatists on Friday. The board said ERC's imprisoned leader was ineligible to take a European Parliament seat he won in May. It also stripped Catalonia's president, Quim Torra, of his regional parliament seat.

ERC leader and former Catalan vice president Oriol Junqueras was found guilty by Spain's Supreme Court in October of sedition and misuse of public funds for his role in an illegal secession attempt by Catalonia's regional leaders in 2017.

Torra, who belongs to another Catalan separatist party, was found guilty last month of disobedience after he refused to remove separatist propaganda from public buildings during an official election campaign period.

Sanchez and United We Can leader Pablo Iglesias started Saturday's parliamentary debate waiting to see if the electoral board's decisions would make ERC alter its position on abstaining from the votes.

But Pere Aragones, ERC's No. 2 and the current vice president in the Catalan regional government, told reporters in Barcelona after a meeting of the party's leaders that they were sticking by their deal with the Socialists.

"Those who thought that this operation by the electoral board would mean that ERC would become the unwitting ally of (the right wing) made a mistake," Aragones said.

Sanchez opened Saturday's debate in the Congress of Deputies with a long speech in which he laid out the priorities of his proposed government, focusing on a strong defense of public education, health and social services.

He also mentioned his recent agreement with ERC to open talks with the Catalan regional government on finding a solution to the question of Catalonia's secession, the gravest institutional problem Spain has faced in decades.

"We have to get back to politics and get this conflict out of the courts," Sanchez told lawmakers in the parliament's 350-seat lower house. "The law by itself is not enough. The law is the basic condition we must respect, but dialogue is the way forward."

Right-wing parties have accused Sanchez of putting Spain's territorial integrity at risk by agreeing to talk with separatists in wealthy Catalonia, where polls show that roughly half of the 7.5 million residents would support breaking away from the country. Secession is opposed by the other half of Catalans, and by most Spaniards as a whole.

Opposition leader Pablo Casado, president of the conservative Popular Party, lambasted Sanchez for his deals with United We Can and ERC.

"You are bringing us a nightmare government. Above all for those Spaniards living in Catalonia," Casado told Sanchez from a lectern.

Sanchez has said he would rule out allowing the Catalan separatists to hold a referendum on out-right independence, which the government and Spain's top courts say would violate the Spanish Constitution.

Sanchez became prime minister in 2018 after leading a push to oust Mariano Rajoy's conservative government. He kept a minority government afloat until he failed to get a national budget passed early last year and called a snap election.

The Socialists received the most support of any party in the April vote but failed to strike a deal with United We Can. Sanchez was forced to call a second election for November that barely changed the distribution of power in parliament.