The best international TV shows of the 2010s 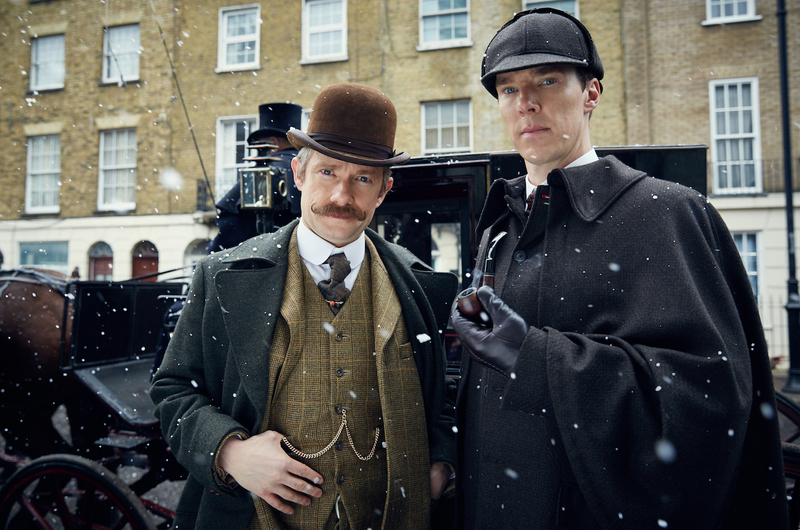 Martin Freeman (left) and Benedict Cumberbatch, in a scene from Masterpiece’s "Sherlock." (AP)

If streaming was the television story of the decade, then close behind was the explosion of global programs that came to American screens to help fill all that new bandwidth. Shows appeared from all over the world, most noticeably financed or acquired by Netflix but also flooding in through other streaming services and cable networks.

On any given day in 2019, there were likely to be more international shows premiering in America than American-made shows. I've tried to sample as much of that bounty as I could. I've distilled all those hours into this list of my top international shows of the last decade.

19. Please Like Me (Australia) Funny, charming and scabrous, Josh Thomas' series is about a 20-year-old who's sidling out of the closet while caring for his theatrically suicidal mother. The future stand-up innovator Hannah Gadsby plays a version of herself in the show's later seasons. (Hulu)

16. Strong Girl Bong-soon (South Korea) This rom-com mystery stars Park Bo-young as a video game designer with super strength, which is passed along through the women in her family. (Netflix)

14. The Bridge (Denmark-Sweden) Other Nordic noirs may have been more tightly (and realistically) plotted, but they didn't have Sofia Helin, whose understated yet intense portrayal of the on-the-spectrum homicide detective Saga Noren. (Hulu)

13. Fleabag (Britain) Phoebe Waller-Bridge's razor-edged, smutty comedy of upper-middle-class British manners would rate higher if it weren't so determined to get you on its title character's side. But few shows could make you laugh as helplessly. (Amazon)

12. El Marginal (Argentina) A former cop goes undercover inside a Buenos Aires lockup that resembles a fortified, Fellini-esque shantytown, in a show that makes most American prison dramas look like work release at Disneyland. (Netflix)

11. Detectorists (Britain) Mackenzie Crook (who wrote and directed) and Toby Jones play a pair of friends who share featureless lives and a passion for metal detecting. This quiet comedy that could best be described as mournfully joyous. (AcornTV)

10. A Very English Scandal (Britain) Stephen Frears' scathing yet touching satirical drama about British politician Jeremy Thorpe and Norman Scott, the former lover he was accused of trying to kill, belongs here for the bold, outstanding performances of Hugh Grant as Thorpe and Ben Whishaw as Scott. (Amazon)

9. Killing Eve (Britain) A repressed intelligence analyst and a glamorous, childish killer play out their fascination, attraction and jealousy in life-changing and potentially lethal ways. Stars Sandra Oh and Jodie Comer, and principal writers Phoebe Waller-Bridge (Season 1) and Emerald Fennell (Season 2), have turned that premise into a riff on the romantic spy thriller that can be darkly funny one moment and devastating the next. (Hulu)

8. Fauda (Israel) An absorbing, straightforward thriller about an Israeli counterterrorism unit that shrewdly exploits the exigencies and emotions of the Israeli-Palestinian conflict and its dusty, mazelike locales. (Netflix)

6. The Crown (Britain) The writer Peter Morgan finds an even greater quota of subtle psycho-political drama in the life of Elizabeth II than he had in the films The Queen and The Appointment, mainly by adding in the variously jealous, scheming, greedy and crackpot members of her family. (Netflix)

5. Gomorrah (Italy) Developed by Roberto Saviano from his book of the same name, this saga of Neapolitan gangland politics is an exemplary mafia tale: brutal, brooding, utterly addictive. (Netflix)

4. Happy Valley (Britain) Among the writer and producer Sally Wainwright's impressive portfolio of shows (Gentleman Jack, Scott & Bailey, Last Tango in Halifax), the jewel is this ingeniously constructed and powerful police drama set in the small industrial towns and winding country lanes of Yorkshire. Sarah Lancashire gives a tour-de-force performance as a weary, tenacious patrol officer who continually finds herself butting up against the violence, physical and emotional, of men. (Netflix)

3. The Bureau (France) In perhaps the smartest, most authentic-feeling procedural espionage series anywhere in the world, Mathieu Kassovitz stars as a foreign-intelligence agent who, after returning from a posting in Syria, makes a mistake whose increasingly grim ramifications have played out across the entire series. (Sundance Now)

2. Sherlock (Britain) The nimble inventiveness of creators, Steven Moffat and Mark Gatiss, and the superbly assured and clever work of stars Benedict Cumberbatch and Martin Freeman, made this modern retelling of the Sherlock Holmes stories the most smartly entertaining show on TV. (Netflix and pbs.org)

1. Prisoners of War (Israel) The show that inspired Homeland turned out to be something quite different: tense but in a quiet, leisurely, realistic style; a taut and intelligent political thriller that was above all a melancholy, at times heartbreaking character study of soldiers and families damaged by war. (Hulu)

Print Headline: The best international TV shows of the 2010s