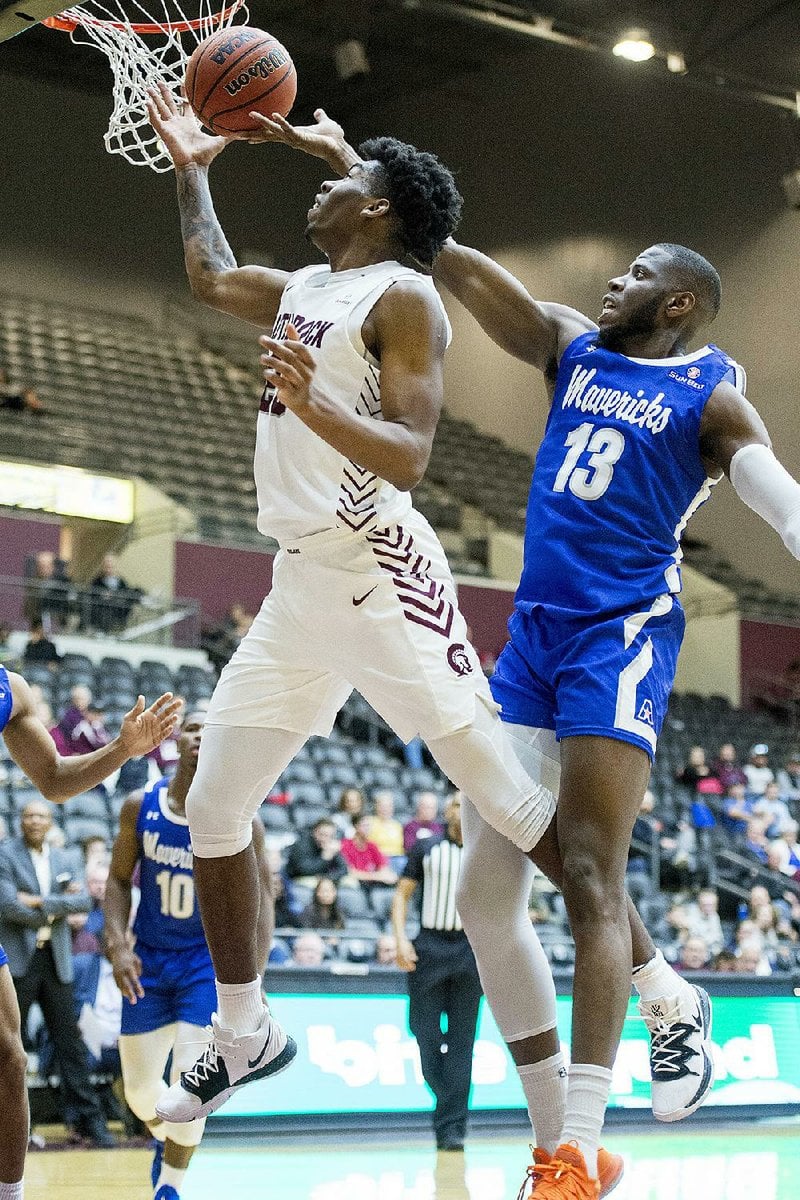 UALR forward Kamani Johnson (left) reaches for a rebound against Texas-Arlington’s Jabari Narcias in the Trojans’ 92-89 victory Saturday at the Jack Stephens Center in Little Rock. Johnson finished with a career-high 30 points, to go along with 13 rebounds and 5 assists. He also made 14 of 16 from the foul line. (Arkansas Democrat-Gazette/Jeff Gammons)

If the first four games of Sun Belt Conference play have revealed anything about this University of Arkansas at Little Rock men's basketball team, it's been the reversal from the Trojans' late-game woes a season ago.

"Last year I was right here a lot of times when we lost a lot of close basketball games, and it can be demoralizing to your players," UALR Coach Darrell Walker said after Saturday's 92-89 victory over Texas-Arlington at the Jack Stephen Center in Little Rock. " 'Coach, this ain't working, man. We got to win.' I'm sure [they've said] that to their self, because I've been an ex-player myself."

The Trojans have no reason to say that these days and have instead constructed a different narrative -- one that's involved winning close games, further evidenced by Saturday's victory.

UALR (10-5, 4-0 Sun Belt) led for nearly the entire game and had a 12-point advantage early in the second half, but like its first three conference games, this again became about making enough plays late.

With the shot clock about to expire, sophomore point guard Markquis Nowell banked a three-pointer off the glass with 3:13 remaining, putting UALR ahead 87-79. But Texas-Arlington (5-10, 1-3) whittled the deficit to two with just over a minute left.

In the final minute, sophomore forward Kamani Johnson completed a three-point play to extend the lead to five, then he later grabbed a crucial defensive rebound, which had followed two UTA missed shots.

Johnson made 1 of 2 from the free-throw line to put UALR up 91-87 with 18 seconds left. Then junior guard Jaizec Lottie, who had missed two free throws earlier in the final minute, blocked a three-point attempt on the other end.

After the Mavericks cut it to two with eight seconds left, Lottie made 1 of 2 from the line to put UALR up three.

Texas-Arlington guard Brian Warren's last-second, potential game-tying three from the top of the key rattled in and out on the other end, and the Trojans claimed their fifth win in a row -- the program's longest win streak since it won six straight early in the 2016-17 season.

UALR, which won 10 games last season, has already matched that total, thanks to a now 5-2 record in games decided by five points or less. All four of their Sun Belt victories have been within four.

The Trojans, who were picked 11th of 12 in the Sun Belt's preseason coaches poll, sit alone atop the league standings heading into Monday night's home showdown against Georgia Southern (9-6, 3-1). The Eagles are tied for second.

"We got picked second to last," Johnson said. "We got something to prove. We're not satisfied at all, man."

Johnson finished with a career-high 30 points, to go along with 13 rebounds and 5 assists, and he hit 14 of 16 from the foul line. Nowell, who had struggled in the last two games, scored 29 points and went 7 of 13 from behind the arc, many of those threes coming from far beyond the line. Nowell was simply unguardable in the early going, scoring 14 of the Trojans' first 16 points, including a 4-for-4 start from three-point range.

The Trojans shot 57% from the floor in the first half, while the Mavericks shot 61% and hit 6 of 12 three-pointers.

Texas-Arlington forward Jordan Phillips, who had 15 points in the first half, finished with 18. Four other Mavericks finished in double figures, including a team-high 20 points from guard Sam Griffin.

Like he did early, Nowell stayed hot into the second half, hitting back-to-back threes that capped off a 12-2 UALR run in the opening 21/2 minutes, pushing the Trojans' lead to 58-46.

The Mavericks continued to stay within striking distance. UALR's lead was down to 68-63 with 11:55 to play after Texas-Arlington guard David Azore completed a four-point play. But less than three minutes later, UALR had gone back up by 10.

"This team has found a way to believe in their selves," Walker said, "and that's big for a young basketball team."

Marie Benson led Texas-Arlington with 25 points and 7 rebounds, shooting 11 of 16 from the field and leading the Mavericks to their first victory over UALR since joining the Sun Belt Conference in the 2013-14 season.