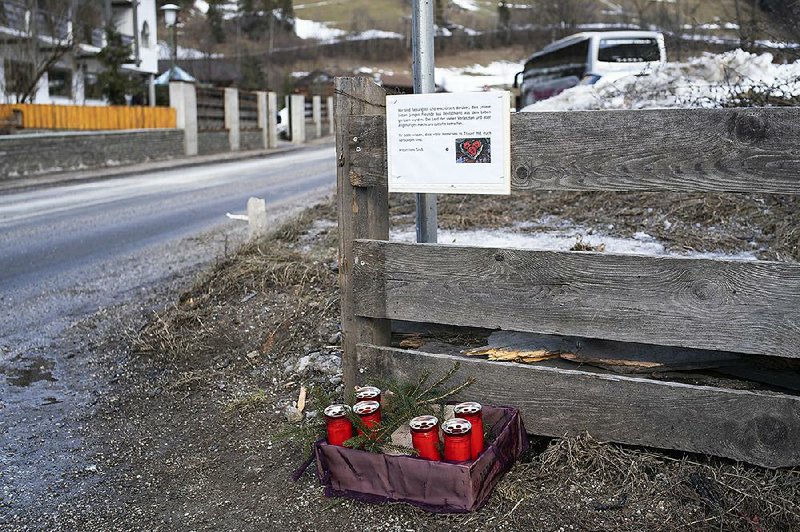 A makeshift memorial marks the site of Sunday’s deadly crash in the Alto Adige region of northern Italy. More photos at arkansasonline.com/16italy/.

The deadly crash occurred in a village of Valle Aurina, northeast of Bolzano in the Alto Adige region, shortly after 1 a.m. as the Germans gathered near their tour bus. They were between the ages of 20 and 25.

The largely German-speaking autonomous region of northern Italy, with its ski resorts in the Dolomites and villages around Bolzano, is popular with German tourists.

"The new year begins with a terrible tragedy," said the regional president of Alto Adige, Arno Kompatscher. "We are left stunned."

The driver of the car had a high blood alcohol content and was driving particularly fast, a Carabinieri police official in Brunico told The Associated Press on condition of anonymity because he wasn't authorized to give his name. He said police had concluded that the crash wasn't an act of terrorism.

Italian news reports said the driver's blood alcohol level was nearly four times the legal limit, and that he slammed into the tourists as they were getting off their bus and returning home after an evening out.

"They were torn from their lives by the actions of someone speeding under the influence of alcohol," said Armin Laschet, the governor of North Rhine-Westphalia, the German state that is home to most of the victims.

The Lutago volunteer fire service said on Facebook that six people died at the scene. The 11 injured, four of whom were in critical condition, were taken to several regional hospitals, including two who were airlifted to a hospital in Innsbruck, Austria, said Bolzano Carabinieri Commander Alessandro Coassin.

Gallery: Aftermath of a deadly car crash in northern Italy

Coassin said the driver, identified by Italian media as a 28-year-old man from the nearby town of Chienes, was arrested on suspicion of highway manslaughter and injury and was being treated at the hospital in Brunico.

Most of the victims hailed from western Germany, though two of the injured were Italian, officials said.

"These young people wanted to spend a good time together and were torn out of their lives or seriously injured from one second to the next," Laschet said.

Speaking to reporters in Germany, Laschet said the victims came from various cities.

"It was a single group ... but not everyone knew each other," he said.

In all, 160 rescue workers and emergency medical personnel rushed to the crash scene, which "looked like a battlefield," said Helmut Abfalterer of the Lutago volunteer fire service.

Mourners later left candles and flowers at the crash scene, which was located along a two-lane road dotted by hotels and piles of snow in the mountainous region.

Kompatscher told a news conference the victims were part of a group of young Germans on vacation. He expressed his condolences to their families and declined to provide further details pending notification of their loved ones.

The accident occurred on the final long weekend of the Christmas and New Year's holiday in Italy, which will be capped by Epiphany today.