U.S. Sen. Tom Cotton is shown in this file photo.

"Qassem Soleimani was an operational commander in a field of battle where American troops were lawfully present and possessed an inherent right of self-defense. If he didn't want to get himself killed, he shouldn't have been in Iraq plotting the death of American troops," the Republican from Dardanelle said.

In the days since Soleimani's death, Iraq's prime minister and some of its lawmakers have portrayed the killing as an illegal assassination and an affront to Iraqi sovereignty.

"For more than 20 years, he's been killing Americans by the hundreds or even the thousands, and he has spent every day plotting how to kill more Americans. So it's just retribution for all those Americans who died by his hands and critical to preventing the death of more Americans," he said.

Despite a 170-0 vote by the 328-member parliament Sunday to call for the ouster of foreign troops, Cotton said it's "premature" to discuss a pullout.

Pro-American lawmakers didn't participate in the vote, he said.

Cotton, who served tours of duty in Iraq and Afghanistan, began pressing for a harder line against Iran after taking office in the U.S. House of Representatives in 2013. Since arriving in the U.S. Senate in 2015, he has become one of Tehran's fiercest critics.

Two months into his Senate term, he sent a letter to the leaders of the Islamic Republic of Iran, informing them that any deals with the American administration might be short-lived.

Forty-six of his Republican colleagues signed it as well.

"President [Barack] Obama will leave office in January 2017, while most of us will remain in office well beyond then -- perhaps decades," the letter stated. "What these two constitutional provisions mean is that we will consider any agreement regarding your nuclear-weapons program that is not approved by the Congress as nothing more than an executive agreement between President Obama and Ayatollah Khamenei. The next president could revoke such an executive agreement with the stroke of a pen and future Congresses could modify the terms of the agreement at any time."

Once a nuclear agreement was struck between the U.S. and Iran, Cotton began working to toss it out.

In May 2018, President Donald Trump announced that the U.S. was withdrawing from the pact. Later that year, he began reimposing economic sanctions that had been lifted by Obama.

In April 2019, Trump announced that the Iran's Islamic Revolutionary Guard Corps would be designated as a foreign terrorist organization.

On Sunday, Iran announced that it would no longer comply with the terms of the nuclear agreement, which other signatories had never abandoned.

The development isn't cause for alarm, according to Cotton, who said the deal -- at best -- had only slowed Iran's nuclear ambitions.

"No longer complying with a toothless arms control measure is not a significant setback to the United States. The setback was the deal itself," he said.

Cotton, who has had Trump's ear on Iran and some other key issues, said he hadn't yet spoken with the president about last week's military strike.

"I obviously was not in Florida with him and don't have secure communications, so I would not expect him to be speaking to me over open phone lines about military operations, but we've spoken on many occasions about our Iran policy and the threat Iran poses to Americans. He knows very well where I stand, and he knows that I support this action," Cotton said.

He raised the possibility that pro-U.S. lawmakers in Iraq would reach a deal with others in parliament to ensure a continuing American presence.

Other nations are also counting on the U.S., he said.

"Even if we withdrew from Iraq, that doesn't mean that we would withdraw from the Middle East. We still have a sizable troop presence in Jordan, in Kuwait, in Qatar and Bahrain. And those troops, primarily sailors and airmen, act as the primary check against Iranian aggression in the region as Qassem Soleimani learned the hard way on Thursday night," Cotton said.

Cotton had called for more forceful responses in June after the downing of a U.S. drone by Iran and after an attack on a Japanese oil tanker in the Strait of Hormuz.

The U.S. blamed Iran for the mining of the tanker, an allegation that Tehran denied.

On PBS' Firing Line with Margaret Hoover in May, Cotton was asked whether the U.S. could win a war with Iran.

He said yes, adding: "Two strikes. The first strike and the last strike."

Asked Sunday whether he still believes a war would be over in two strikes, he suggested his statement shouldn't have been taken literally.

"When I said the first strike and the last strike, I was referring to the old metaphor that in a barfight there'd be two punches: the first punch and the last punch," he said.

"We do not want a war with Iran. But if Iran tries to start a war with us, we have infinitely more power than do they to stop that war in its tracks," he added.

He questioned whether Iran would be the beneficiary if the U.S. were forced out of Iraq.

"Iran has been falling into ill repute in Iraq over the last few months," he said. "You know most of the protests you've seen in recent months has been directed towards Iran and towards the influence that Iran has tried to gain inside of Iraqi society. Much of the political instability in their government as well is also attributable to the Iraqi people getting sick and tired of Iranian meddling in their politics. So American troops in Iraq or not, Iran still faces a very, very tough resistance from the Iraqi people."

Sunday's vote isn't an indication that pro-Iranian forces are in the ascendancy in Iraq, he said.

"They're not gaining strength. They're opposed by plenty of other Shiites that don't want to be dancing to the tune of Iran, and then they're opposed almost uniformly by the Sunni and Kurdish elements of Iraqi society," he said.

In the interview, Cotton was dismissive of Tehran's military might.

"Iran, although oftentimes portrayed as 10 feet tall, is in fact a weak and feeble power. The United States is infinitely more powerful than Iran. They fear us; we should not fear them," he said.

In a Saturday night tweet, Trump warned Iran that there would be consequences if it attacked the U.S. Fifty-two Iranian targets, he said, had already been selected, including "some at a very high level & important to Iran & the Iranian culture."

Asked what cultural sites are legitimate targets for the U.S. and Iran to attack, Cotton said: "I don't have any comment on what sites the president may be discussing. It's obviously a classified matter."

Cotton wouldn't address whether the Smithsonian and the Library of Congress and their Iranian equivalents should be off limits in any U.S.-Iranian conflict.

Democratic Party of Arkansas Chairman Michael John Gray expressed concern that the latest developments would "destabilize the region and put American men and women that are serving over there in further danger."

If the U.S. is forced to leave Iraq, "I think it strengthens Iran," he said.

Last week's missile attack shouldn't have been made rashly, he said.

"I would hope there was a long-term strategic plan for what followed after the attack. I'm going to hope that there was, but this seems like cleaning it up after the horse is already out of the barn," Gray said. 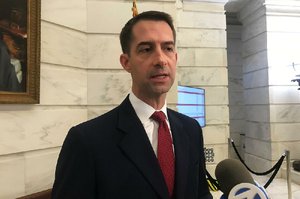 Photo by AP
U.S. Sen. Tom Cotton is shown in this file photo.