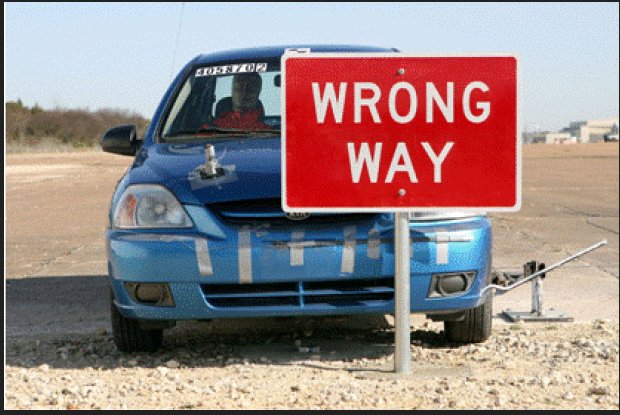 A "Wrong Way" sign is shown in this undated photo. Arkansas officials had hoped that replacing the existing "Do Not Enter," "One Way" and "Wrong Way" signs on highway exit ramps would reduce the chance of head-on collisions.

In the early morning hours of Sept. 10, 2017, a thermal camera on Interstate 17 in Phoenix detected a driver entering the freeway the wrong way.

Arizona's Traffic Operations Center received a wrong-way driver alert at 3:14 a.m., according to a summary.

State troopers at the center immediately began tracking the wrong-way driver with cameras along the route, and they radioed location updates to troopers on the road.

Within two minutes, dynamic message boards were activated to alert other drivers that a wrong-way driver was heading their way and that they needed to exit the freeway.

Within three minutes, the first 911 call about the wrong-way driver was logged.

Within five minutes of the alert, troopers radioed the police in the city of Peoria, Ariz., for assistance. Within six minutes, troopers spotted the wrong-way driver.

And within seven minutes of the alert, spike strips were deployed at Peoria Avenue. The wrong-way driver was ultimately taken into custody -- 6 miles after entering the freeway -- and was charged with driving while intoxicated.

Since Arizona's wrong-way driver detection system -- the first in the nation -- became fully operational in early 2018, more than 90 wrong-way drivers have been detected, according to the latest data.

That's why Arkansas highway officials likely will test some version of the system in a renewed effort to stem the rise in wrong-way crashes on the freeways.

What has been done so far hasn't worked, according to preliminary data provided by the Arkansas Department of Transportation.

The data shows that 25 wrong-way crashes occurred in 2018 on state freeways, almost double the number that occurred in the previous year and the highest since the department began tracking them under a 2009 state law.

A $3 million upgrade of markings and signs at all interstate exit ramps was designed to deter deadly wrong-way crashes and was completed in March 2018, but it had no effect on the number of such crashes.

"We're not seeing a decrease in wrong-way crashes as we hoped," said Andy Brewer, the assistant division engineer of transportation planning and policy for the department.

The increase is part of a national trend.

In the United States, wrong-way crashes result in an average of 300 to 400 people being killed each year, representing approximately 1% of the total number of traffic-related fatalities that occur annually, according to the Federal Highway Administration. While the percentage is small, such crashes tend to be more severe because they involve head-on collisions or opposite-direction sideswipes at high speed, the agency said.

A total of 29 people have died on Arkansas highways as a result of wrong-way crashes since 2015, according to department data. About 60% of the crashes occur at night and about half are the result of drug or alcohol impairment, the data shows.

As a result, Arkansas highway officials are planning another study to see what else they can do to lower the number of wrong-way crashes.

The study that Brewer and the department's traffic safety engineer, Adnan Qazi, developed will identify potential contributing factors to wrong-way entry and effective countermeasures that can be implemented in a cost-effective manner, according to the research problem statement.

The tasks include reviewing existing data to determine factors correlating to wrong-way crashes, reviewing available literature, and determining which countermeasures should be tested and evaluating them.

The countermeasures likely will include some form of the Arizona pilot system, which has attracted attention from other states' highway agencies and garnered a 2019 national safety award from the Roadway Safety Foundation.

The study will "look at some of these experimental technologies that we think might be applicable to us in Arkansas," Brewer said. "These might include what Arizona has tried."

Brewer is familiar with the system. Brent Cain, who heads the Arizona Department of Transportation's transportation systems management and operations division, regularly gives presentations around the nation about the system. Among his stops was an Arkansas transportation research conference held in August in Hot Springs.

In the initial testing of the Arizona system, nearly all of the drivers turned around on the off-ramps, thanks to another element of the system: an internally illuminated sign with flashing lights designed to get the attention of wrong-way drivers.

Arizona officials found that wrong-way drivers who are impaired by alcohol or drugs don't turn on their vehicle lights at night. Driving with no lights wouldn't allow drivers to see Arkansas signs, which need vehicle lights shining on them to be seen at night.

"Most of these wrong-way drivers that are very dangerous occur at night and involve somebody that's very drunk," Brewer said. "Those are the ones we are trying to catch. There's not any nationally accepted technology that's out there. That's why there's a lot of states doing this type of research. We think it's time to do it in Arkansas."

The study, which could be undertaken by a university, is expected initially to take about two years, he said. The study was awarded a maximum of $250,000 in federal research money, according to Brewer.