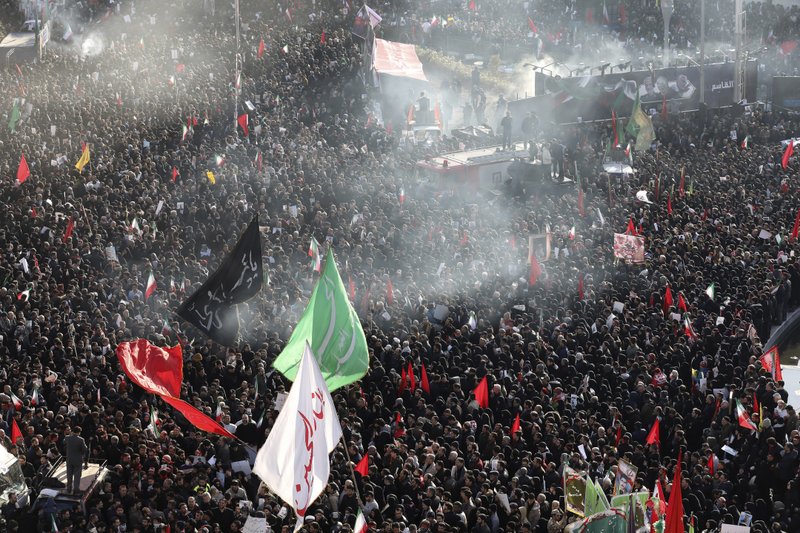 Mourners attend a funeral ceremony for Iranian Gen. Qassem Soleimani and his comrades, who were killed in Iraq in a U.S. drone strike on Friday, at the Enqelab-e-Eslami (Islamic Revolution) square in Tehran, Iran, Monday, Jan. 6, 2020. (AP Photo/Ebrahim Noroozi)

MANILA, Philippines -- Philippine President Rodrigo Duterte ordered the military to prepare to deploy its aircraft and ships "at any moment's notice" to evacuate thousands of Filipino workers in Iraq and Iran should violence break out, reflecting Asia's growing fears for its citizens in the increasingly volatile Middle East.

Other Asian nations with large populations of expatriate labor may face similar decisions amid the escalating tensions between the United States and Iran after last week's U.S. airstrike that killed Iranian Gen. Qassem Soleimani in Baghdad.

Duterte held an emergency meeting with his defense secretary and top military and police officials Sunday to discuss the evacuation plans.

"President Duterte ordered the Armed Forces of the Philippines to be prepared to deploy military assets to repatriate overseas Filipinos in the Middle East, particularly from Iran and Iraq, at any moment's notice," said Sen. Christopher Lawrence Go, a close ally of Duterte, who was at the meeting.

Duterte expressed fears Monday that the Philippines may have to carry out evacuations if violence hits Middle Eastern countries like Saudi Arabia that host large numbers of Filipino workers.

"I'm nervous. Iran seems to be hell-bent on a retaliation, which I think will come. It's a matter of time ... the cry for blood is there," Duterte said in a speech. He urged Congress to hold a special session on the impact of a possible crisis in the Middle East and set aside contingency funds.

Iran has vowed to retaliate and President Donald Trump warned that U.S. forces would hit back at 52 Iranian targets if Americans come under attack. Iraq's Parliament has also called for the expulsion of all American troops from Iraqi soil, which could revive the Islamic State in Iraq.

Compounding contingency plans is the uncertainty about where hostilities could possibly break out.

Military Chief of Staff Lt. Gen. Felimon Santos Jr. said Philippine forces have identified possible evacuation routes not only in Iraq and Iran but other hotspots, like Israel.

"There are probabilities like that, and we are improving our plans just to cover everything just in case something happens," Santos told reporters in Manila.

Other countries face similar dilemmas. Asians make up 40% of the world's migrants, and Middle Eastern countries are a common destination. African migrants are also employed around the Middle East, though the possibility of their home countries arranging evacuations is uncertain.

Indian External Affairs Minister S. Jaishankar said Sunday on Twitter that he spoke to U.S. Secretary of State Mike Pompeo "on the evolving situation in the Gulf region" and highlighted "India's stakes and concerns."

He also tweeted that he spoke to Iranian Foreign Minister Mohammed Javad Zarif. "Noted that developments have taken a very serious turn. India remains deeply concerned about the levels of tension," he said of his conversation with Zarif.

Gulf Arab states are home to more than 7 million Indian expatriates who help drive the region's economy and keep its cities teeming with doctors, engineers, teachers, drivers, construction workers and other laborers. In United Arab Emirates, Indians outnumber Emiratis three to one.

There are more than 7,000 Filipino workers and their dependents in Iraq and Iran, including many who work in U.S. and other foreign facilities and commercial establishments in Baghdad, the Department of National Defense said.

The workers in Iran and Iraq are a small fraction of the hundreds of thousands of Filipinos who are employed in countries lining the Persian Gulf.

The Philippines is a leading source of labor worldwide, with about a tenth of its more than 100 million people working mostly as household help, construction workers, seamen and professionals.

Information for this article was contributed by Yanan Wang, Emily Schmall and Kim Tong-hyung of The Associated Press.