Bolton willing to testify at trial

Senate subpoena required, he says by Compiled by Democrat-Gazette staff from wire reports | January 7, 2020 at 6:41 a.m. 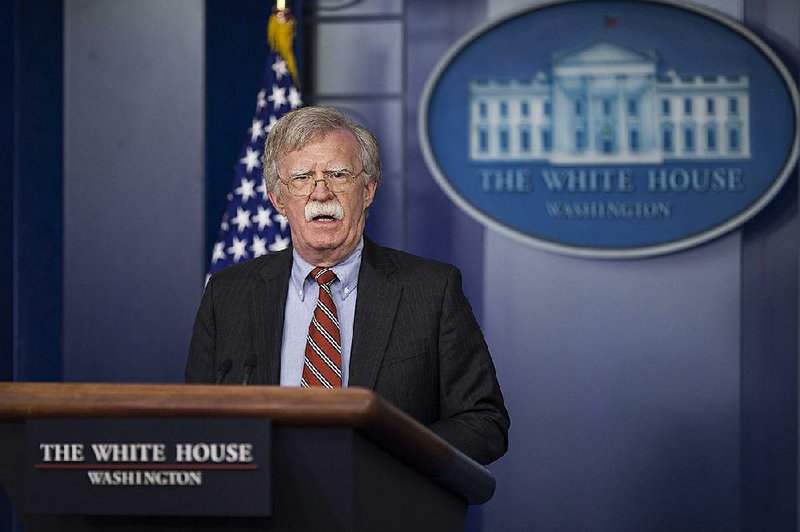 John Bolton, the former national security adviser, said in his statement Monday that it doesn’t appear that constitutional questions about testifying will be resolved in court before the president’s impeachment trial.

"I have concluded that, if the Senate issues a subpoena for my testimony, I am prepared to testify," Bolton said in a statement on his website.

The development could alter the dynamic of the impeachment proceeding, which has been stalled over Democrats' insistence on hearing from critical witnesses Trump blocked from testifying in the House inquiry into his dealings with Ukraine. Bolton is a potentially vital witness, with knowledge of the president's actions and conversations regarding Ukraine that could fill in key blanks in the narrative of the impeachment case.

Democrats quickly seized on his public declaration, arguing that it strengthened their case that the Senate must hear from Bolton and other senior officials as part of Trump's impeachment trial.

"It now falls to the Senate to fulfill its constitutional obligation to try impeachments, and it does not appear possible that a final judicial resolution of the still-unanswered constitutional questions can be obtained before the Senate acts," Bolton wrote. "Accordingly, since my testimony is once again at issue, I have had to resolve the serious competing issues as best I could, based on careful consideration and study."

Sen. Mitch McConnell, R-Ky., has refused to commit to calling witnesses for a Senate trial. Now that the former national security adviser has said he is willing to share relevant information, McConnell, the Senate majority leader, may face new pressure from some moderate Republicans, such as Sens. Susan Collins of Maine, Lisa Murkowski of Alaska and Mitt Romney of Utah, to allow him to testify.

"Given that Mr. Bolton's lawyers have stated he has new relevant information to share, if any Senate Republican opposes issuing subpoenas to the four witnesses and documents we have requested, they would make absolutely clear they are participating in a cover-up," Sen. Charles Schumer, D-N.Y., the minority leader, said in a statement.

The two parties have been at an impasse over the issue of witnesses for weeks now, and the dispute has delayed the start of Trump's trial. House Speaker Nancy Pelosi, D-Calif., has declined to send the Senate the charges against Trump, which would trigger the start of the trial, saying that she first wants assurances that McConnell will run a fair process.

Democrats insist the trial must include testimony from Bolton and others, as well as new documentary evidence.

McConnell has called for a swift impeachment trial, with a possible final vote after opening arguments. He has repeatedly referred to President Bill Clinton's impeachment, when leaders decided how to proceed after the trial had started. In that case, witnesses gave depositions in private and some excerpts of those interviews were played on the Senate floor.

"The Senate has a unanimous bipartisan precedent for when to handle midtrial questions such as witnesses -- in the middle of the trial," McConnell said as he opened the Senate on Monday.

Under Senate rules, it takes only 51 senators to call a witness or request new evidence.

"The President & Sen. McConnell have run out of excuses," Pelosi tweeted Monday. "They must allow key witnesses to testify, and produce the documents Trump has blocked, so Americans can see the facts for themselves. The Senate cannot be complicit in the President's cover-up."

At least one Senate Republican was ready to hear from Bolton. "He has first-hand information," Mitt Romney told reporters. "Assuming that the articles of impeachment reach the Senate, I'd like to hear what he has to say."

Other Republicans downplayed the possibility of calling Bolton at the trial. "Call me a skeptic that there's anything he would add," said Sen. John Thune of South Dakota, a member of Republican leadership,

Sen. Marco Rubio of Florida tweeted that the Senate should not move beyond the evidence collected in the House inquiry -- a process that McConnell has called the "least thorough" in history.

"Our job is to vote on what the House passed, not to conduct an open ended inquiry," Rubio tweeted.

Two other Republicans, Sen. Tom Cotton of Arkansas and Sen. Josh Hawley of Missouri, introduced legislation Monday to change Senate rules to allow the dismissal of the impeachment articles if they aren't transmitted to the Senate.

"I don't know why we would" hear from Bolton, Hawley said, "but let's start the trial."

Meanwhile, House Intelligence Committee Chairman Adam Schiff, D-Calif., signaled in a tweet that he will not call Bolton again in the House, writing that "the Senate must allow testimony from him, [acting White House Chief of Staff Mick] Mulvaney and others."

Schiff had invited Bolton to testify in the inquiry but did not subpoena him, saying he didn't want the impeachment case to languish in the courts.

With the impasse over a Senate trial continuing, Rep. Ro Khanna, D-Calif., on Monday suggested one way out: Let Chief Justice John Roberts decide which witnesses must testify.

"If Sen. McConnell agrees that Justice Roberts should make the rules of who gets to testify -- a Bush appointee -- he would have absolutely no debate from any of the Democrats," Khanna said, referring to Roberts' 2005 nomination by then-President George W. Bush, a Republican.

Under the Constitution, the chief justice presides over presidential impeachment trials, but the rules traditionally have been set by the senators.

If Bolton did appear under oath in the Senate, he would be the closest adviser to the president to answer questions about what Trump said privately as he asked Ukrainian President Volodymyr Zelenskiy to investigate former Vice President Joe Biden and his son, Hunter Biden, as Trump withheld nearly $400 million in military aid from the country.

The Democratic-led House impeached Trump last month on charges of abuse of power and obstruction of Congress.

Trump has sought to block his most senior aides, as well as former advisers who have left the White House, from speaking to Congress, and has gone to court to stop several of them from cooperating.

Bolton declined to say Monday precisely what he would be willing to tell Congress. But his lawyer, Charles Cooper, told the House's top lawyer in November that Bolton knew about "many relevant meetings and conversations" connected to the Ukraine matter that had not been shared with House impeachment investigators.

Although Bolton never spoke with House investigators, his aides provided them with a portrait of how he viewed Trump's dealings with Ukraine. The aides said that Bolton was deeply concerned about how Trump and his personal lawyer, Rudy Giuliani, pressured the Ukranians to investigate the Bidens. A top former deputy testified under oath that Bolton told White House colleagues that Giuliani was a "hand grenade who's going to blow everybody up."

Two-thirds of the Senate -- or 67 votes -- would be needed to convict Trump of an impeachment charge and remove him from office.

Information for this article was contributed by Nicholas Fandos and Michael S. Schmidt of The New York Times; by Zeke Miller, Mary Clare Jalonick, Eric Tucker, Laurie Kellman and Hillel Italie of The Associated Press; and by Felicia Sonmez, John Wagner, Tom Hamburger and Mike DeBonis of The Washington Post.