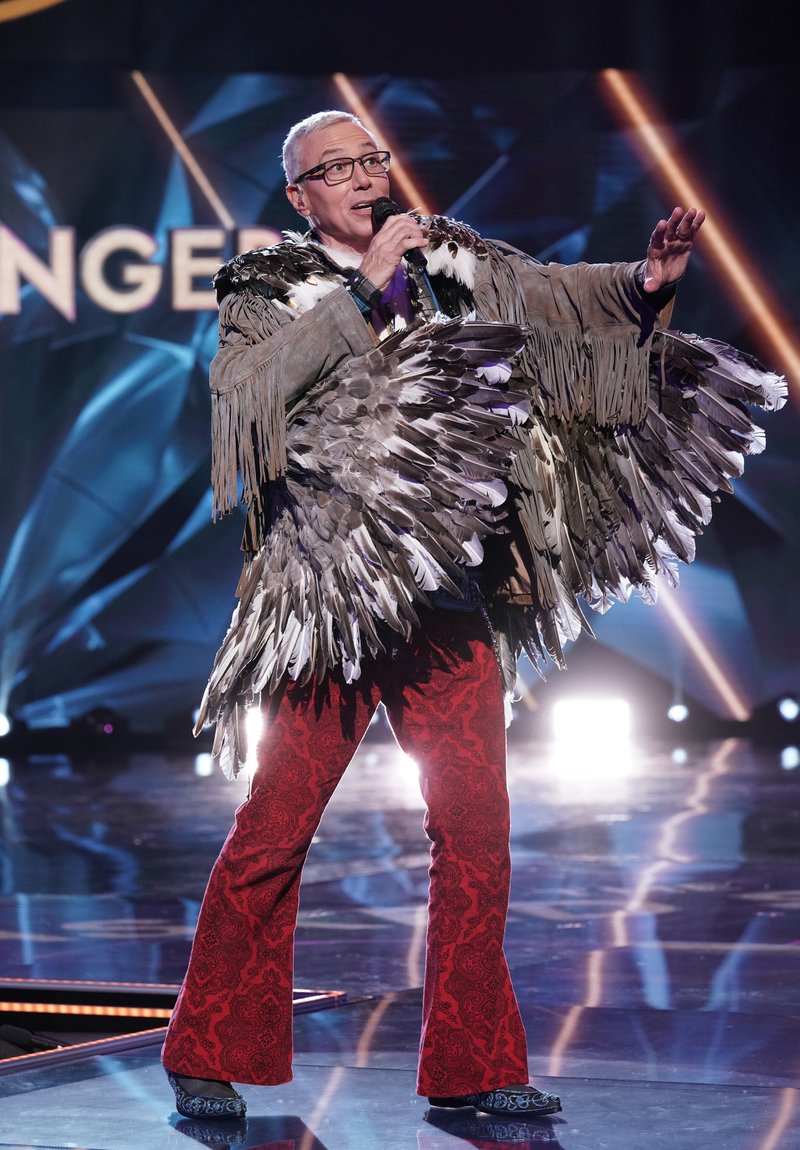 To the surprise of many, Dr. Drew Pinsky was unmasked as the Eagle on the Oct. 9 episode of Fox's The Masked Singer. The quirky competition series debuted in the United States in early 2019 and is based on a South Korean show. (Fox/Michael Becker)

If you were a child in the United States at any point in the last 50 years or so, chances are you've whiled away at least a few hours playing Mad Libs. The fun of the game — in which players fill in the blanks using randomly selected words — comes from the nonsensical, puerile and strangely evocative sentences that result from tossing a bunch of nouns, verbs and adjectives together.

It has been ubiquitous for generations, selling more than 100 million print copies. It has inspired numerous novelty editions, been spun off into an app and evolved into a shorthand term for any kind of incomprehensible linguistic jumble.

2019 brought the evolution of a new, unsanctioned form of the game: pop culture, Mad Libs-style. The chaotic and absurd spirit of Mad Libs seemed to infuse much of the year's entertainment (and the media's coverage of it) in ways that were sometimes amusing, at others unsettling.

There has always been weird news. But this year saw a proliferation of headlines that read like a screwball patchwork of incongruous cultural references. From collective meltdowns over Sonic the Hedgehog's human teeth and Taylor Swift's "cat boobs" to the news of Eva Longoria directing a movie about Flamin' Hot Cheetos and Johnny Depp's supposed plans to produce a musical about Michael Jackson's glove, much of the pop culture news of 2019 felt like Mad Libs written by a pack of sugar-addled, celebrity-obsessed middle-schoolers.

The rise of these word-salad news items is partly a result of the industry-wide pressure on digital journalists to cram as many trending search terms into as short a headline as possible and pounce on the latest social media controversy. But it also reflects the unpredictable, deeply entangled relationship between politics and pop culture in the age of Donald Trump, not to mention the ways in which entertainment has become more fragmented, derivative and confusing than ever.

The first TV hit of the new year, The Masked Singer, arrived on Fox on Jan. 2, 2019, and gave an inkling of the weirdness to come. Based on a South Korean format, the reality competition show featured B-list celebrities like LaToya Jackson and Tori Spelling singing karaoke while disguised in elaborate costumes — a peacock, a bee, a lion — that looked like something from a psychedelic furry convention. A panel of judges tried to guess their identities. The aggressively random show spawned headlines ("Donny Osmond Revealed as Peacock") that probably seemed like gibberish to anyone not constantly immersed in a constant stream of pop culture news.

Season 3 of The Masked Singer will premiere Feb. 2, right after the Super Bowl.

The Masked Singer was but one of many aggressively random unscripted TV projects to debut in 2019. There was also Lindsay Lohan's Beach Club, an MTV series about the actress' efforts to open a nightclub in Greece. This month, Fox will unveil Flirty Dancing, a show in which strangers learn a dance routine and then meet for the first time on a blind date and wordlessly perform together. Other shows followed the formula of (competition) + (obscure craft), including Blown Away (glass-blowing) and Wrap Battle (gift-wrapping). Coming soon is Full Bloom, about "the colorful word of competitive floristry." The soon-to-launch mobile video platform Quibi — a name that appears to have been fashioned with leftover Scrabble tiles — has plans for a true-crime renovation show called Murder House Flip.

Twitter played an outsize role in the Mad Libs effect by amplifying seemingly absurd comments and oddball local news items, turning them into viral sensations and creating a self-perpetuating loop of controversy and pushback. In August, an Arkansas man named Willie McNabb argued that he needed an assault weapon to shoot the "30 to 50 feral hogs" that run into his yard and threaten his children. The comment somehow sparked a Twitter pile-on of snarky jokes that was soon followed by "well, actually" explainers about the real menace of feral hogs in rural America. More recently, an allegedly sexist holiday ad for the high-end stationary bike Peloton led to a frenzy of outraged hot takes (and contrarian defenses). Then, Deadpool star Ryan Reynolds took pity on the poor actress in the commercial, cast her in a commercial for his gin company, and that round of pop culture Mad Libs was complete.

From its start in 1953, Mad Libs has always been tied to pop culture. According to the official history, Leonard Stern, a writer for The Honeymooners, was trying to find the perfect adjective to describe Ralph Kramden's new boss' nose. His friend Roger Price threw out "clumsy and naked." They both laughed at the idea of a "clumsy and naked" nose and, lo, a game was born.

It took them five years to come up with a name, inspired by a conversation between an actor and his agent overheard at Sardi's in New York's theater district. They decided to self-publish the game, and their fledgling business got a major boost when Stern, by then head writer on The Steve Allen Show, persuaded the host to introduce guests using the Mad Libs format. "And here's the scintillating Bob Hope, whose theme song is 'Thanks for the Communist.'"

Print Headline: Why our culture sounded like Mad Libs in 2019