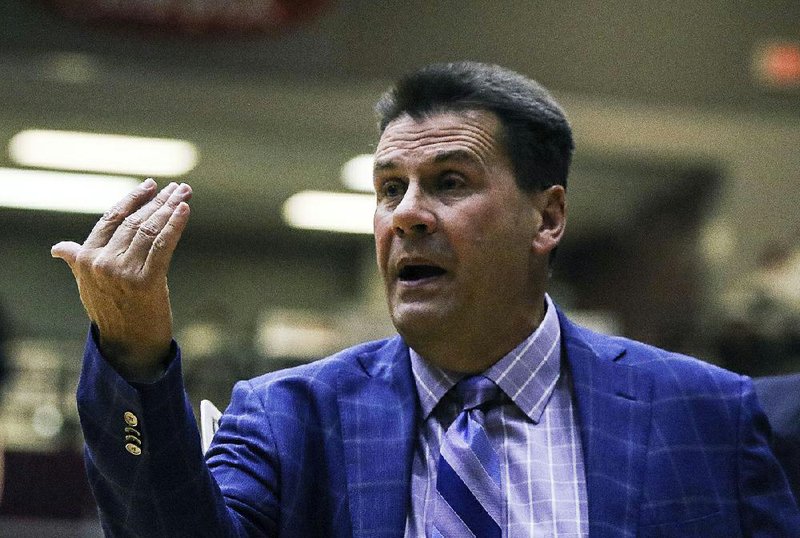 A little over three weeks after taking a leave of absence, Russ Pennell is out as the University of Central Arkansas' men's basketball coach.

The school announced Tuesday that Pennell and UCA "agreed to part ways." The news was first reported Tuesday morning by Jeff Goodman, a college basketball insider for Stadium.

"After much consideration, thought and prayer, I am announcing I will not return to UCA and resume coaching," Pennell said in a statement released by the school. "It is time for me and my family to move forward and pursue some new challenges. We look forward to the future and what God has in store for us."

Pennell could not be reached Tuesday for further comment.

UCA announced Dec. 16 that Pennell was leaving the team for an indefinite period due to "personal reasons." Pennell, who was in his sixth season at the helm in Conway, missed UCA's last six games.

UCA Athletic Director Brad Teague said in an interview with the Arkansas Democrat-Gazette on Tuesday that the decision was mutual and that Pennell was not terminated. Teague, though, declined to delve into specifics as to why Pennell wouldn't be returning. The two met last week and agreed to part ways.

"He's been doing this a long time and has done a great job and been here 51/2 years -- I think he's just ready for something different, a new challenge," Teague said. "After being gone, it just seemed like it wouldn't make sense to come back.

"It's almost like the team's kind of moved on with their attitude. Just didn't seem to make sense right now to introduce the past back into what's looking like a promising future. We just think it was probably the best time for him, and he had some ideas of things he wants to do with himself and I support that."

Associate head coach Anthony Boone has led the Bears as the interim coach, and UCA (4-11, 3-1 Southland) is 3-3 during that stretch. Boone will remain the interim coach for the rest of the season. UCA is set to face New Orleans (4-10, 0-4) tonight in New Orleans at Lakefront Arena.

As for when a coaching search may begin, Teague said that is still undecided, and a decision won't be made until after the season. Teague indicated that keeping Boone and the current staff is not off the table.

"This is a pretty good test for this current staff and pretty good interview process for them, so I'm gonna give them an opportunity, see how our student-athletes respond," Teague said. "It's not just wins and losses, but that's also a big deal, too. We'll see how this next couple months go."

Boone, a former player and longtime assistant under Pennell, told the Democrat-Gazette on Friday that he didn't know why Pennell took a leave of absence or when or if he'd be returning.

Boone said Pennell fell ill prior to when UCA was set to travel to Malibu, Calif., for its game against Pepperdine on Dec. 14. Pennell did not make the trip, and the following Monday the school announced Pennell was taking a leave from the program.

Teague said Tuesday, though, that Pennell is fine physically and that the decision to part ways was not due to health.

Pennell finishes his UCA career 50-116 overall and 32-57 in Southland Conference play. The former UCA and University of Arkansas point guard was hired to take over the Bears' program in March 2014, replacing Clarence Finley.

Pennell had previously served as the interim coach of the WNBA's Phoenix Mercury in 2013. He was the head men's coach at Grand Canyon from 2009-13, compiling a 72-44 record, and he was the interim coach at Arizona for the 2008-09 season, when the Wildcats finished 21-14 and made it to the Sweet 16 of the NCAA Tournament. Prior to that, Pennell had served as an assistant coach at Arizona State, Ole Miss, Oklahoma State and Pittsburg State.

After enduring a postseason ban in his first two seasons at UCA -- a product of low Academic Progress Rate scores under head coach Corliss Williamson's tenure -- Pennell is widely credited for cleaning house and cleaning up the perception of UCA's program.

"He took us out of an APR penalty stage and raised our team GPA really almost 1.2 points," Teague said. "We're at a 3.2 overall GPA for men's basketball, and I'm very proud of that and pleased with what he did."

Pennell had led the Bears to the Southland Conference tournament quarterfinals each of the last two seasons. That had included a quarterfinals berth in the College Basketball Invitational in 2017-18 -- UCA's only winning season under Pennell when the team finished 18-17 overall and 10-8 in the Southland.

"I think he was disappointed that there weren't more wins, but when we look back at it, he really did so much for our program," Teague said. "I'm very happy with where the program is and where it's going. ... I would assume he expected to win more, but that was never a disappointment for me."