State's in line for $5M share of vote funds 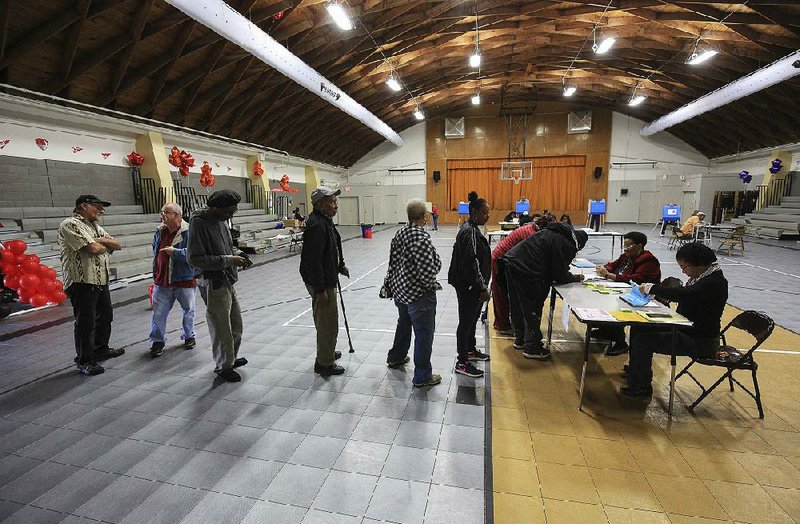 Arkansas is eligible for about $5 million in funds from the federal Help America Vote Act program, state and federal officials said this week.

These funds are included in the Consolidated Appropriations Act of 2020 signed by President Donald Trump on Dec. 20. The act provides $425 million to the U.S. Election Assistance Commission to make grant payments to states using the voting-age population formula in the Help America Vote Act, according to the commission.

The funds will provide states with additional resources to secure and improve election administration, the commission said on its website.

"We've not received anything official from the [Election Assistance Commission] just yet, however, they have published projected amounts by state," said Chris Powell, spokesman for Arkansas Secretary of State John Thurston.

"Under this calculation, Arkansas would get approximately $5 million," he said.

Asked whether Thurston's office plans to use the federal funds to purchase new voting equipment for counties without agreements to get updated equipment, Powell said, "Those determinations have not yet been made."

The $5 million in federal funds is a potential shot in the arm for the Republican secretary of state's bid to provide updated election equipment to counties using older machines.

States will receive federal grant award notification letters from the Election Assistance Commission for this latest round of funding by mid- to late January and allow states to incur costs, effective Dec. 21, the commission said.

The funds will be available for the states when they return a signed funding request letter and the required certifications and assurances, according to the commission. States are required to match 20% of the amount awarded and secure that amount within two years of receiving federal funds.

The secretary of state's office previously used about $4.5 million in funding from the program to purchase voting equipment for counties, Powell said. These federal funds were part of $380 million appropriated in 2018, according to the Election Assistance Commission.

Fifty-four of Arkansas' 75 counties had updated equipment by the November 2018 general election.

Act 808 of 2019 transferred $8.24 million in excess funds in the state's property-tax relief trust fund to the county voting systems grant fund to help the 21 other counties obtain new voting equipment. About $2 million of these funds were used to reimburse three counties for half of what they previously paid for equipment. (Act 808 also increased the homestead property-tax credit from $350 to $375 per parcel and allows for the transfer of excess funds in the property-tax relief trust fund to the state's Long-Term Reserve Fund.)

So far, the secretary of state's office has said that it has signed contracts with Election Systems & Software of Nebraska to provide new equipment for 10 of these 21 counties with the aim of the counties using the new gear in the March 3 primary election.

These counties are Baxter, Drew, Lincoln, Madison, Mississippi, Phillips, Poinsett, Saline, St. Francis and Van Buren. The state's share of the cost will be about $2.4 million and the counties' share will be about $1.2 million, based on figures released for these counties by the secretary of state's office.

Asked about how much in state funds are still available for the 11 counties not expected to have new equipment for March 3, Powell said late Tuesday afternoon in an email, "I checked with our business office, but won't have confirmation til tomorrow."

Act 808 provided $8.24 million in state funds for new voting equipment and, since the secretary of state's office has said $2 million went for reimbursements for three counties and about $2.4 million will go toward purchases in 10 counties, that could potentially leave about $3.8 million to help purchase equipment in the other 11 counties.

Barry Hyde, county judge of Pulaski County, has said he aims to reach agreement on securing new voting equipment for the state's most populous county for the general election in November.