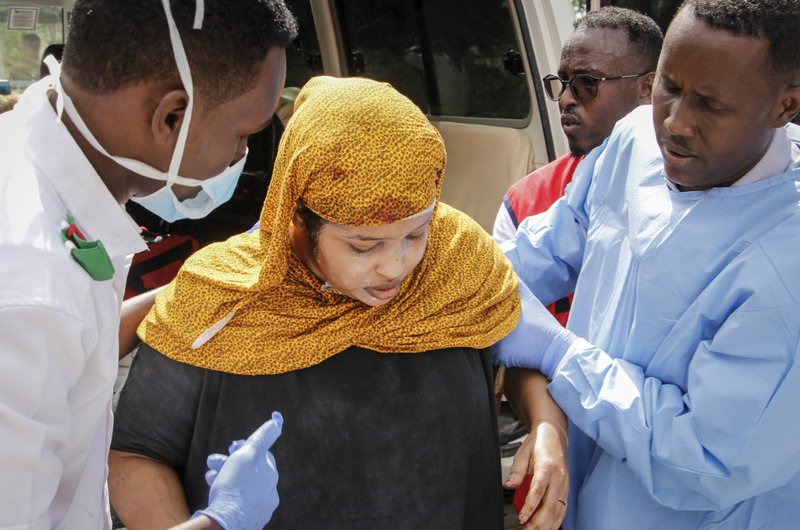 Medics help a woman who was wounded in a vehicle bomb attack on a security checkpoint located near the presidential palace, as she arrives at a hospital in Mogadishu, Somalia, Wednesday, Jan. 8, 2020. (AP Photo/Farah Abdi Warsameh)

Blast deaths at 3 in Somalia capital

Salah Omar, a spokesman for Mogadishu's mayor said that the blast occurred as soldiers conducted searches at a checkpoint. He said the bomb attached to the vehicle was remotely detonated.

Among the dead were two government officials including an adviser of the parliament speaker and a ministry department director, said Ahmed Mohamednur, a Somali lawmaker.

Al-Shabab often targets checkpoints, hotels and government offices in Somalia's capital despite being pushed out of Mogadishu years ago.

On Sunday, al-Shabab fighters overran a key military base used by U.S. counterterror forces in neighboring Kenya, killing three American Department of Defense personnel and destroying several U.S. aircraft and vehicles. The U.S. later sent in additional troops to increase security at the base and adjacent Manda Bay airfield.

At least one person was killed and three others were injured Wednesday in a shooting on a street in Ottawa, authorities in the Canadian capital said.

Though initial alerts sent out around 7 a.m. suggested a gunman was at large on the 400 block of Gilmour Street, near the city center, Ottawa police later said that they believed it was a "targeted shooting" that unfolded both inside and outside a home.

She said police were still investigating what led to the shooting, which occurred about half a mile from Parliament Hill, the home of the country's legislature. The police said they were still looking for at least one gunman.

Two people were taken to a hospital and were in critical condition, said Michaela Schreiter, a spokeswoman for the hospital. A 15-year-old boy was taken to Children's Hospital of Eastern Ontario, said Patrick Moore, a hospital spokesman. The boy is in stable condition, Moore said.

One person was pronounced dead at the scene, police said.

BERLIN -- Germany says new asylum applications in the country dropped more than 14% last year, continuing their decline since an influx of migrants from the Middle East and elsewhere in 2015 and 2016.

In December, 6,771 applications were made in total, the Interior Ministry said.

Interior Minister Horst Seehofer said that "the number of asylum-seekers in Germany has fallen for the third-consecutive year." He said that shows that "the numerous measures of recent years against uncontrolled immigration are working."