Cherokees file to pull out stops on Arkansas casino 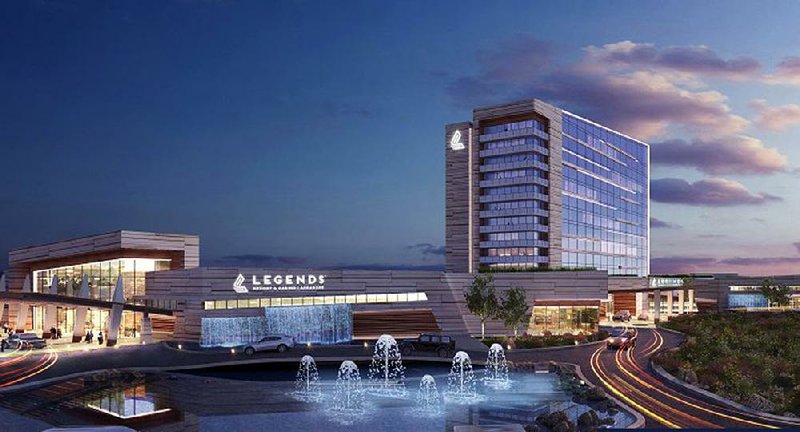 Special to the Arkansas Democrat-Gazette - 08 -12 -2019 - Artist rendering of Cherokee Nation Businesses and Legends resort and casino proposed for Pope County.

Cherokee Nation Businesses, one of the applicants seeking to build a casino in Pope County, was busy this week trying to clear obstacles in the award of a license, by seeking the dismissal of one lawsuit, appealing decisions in it and a second suit, and asking the state Racing Commission to look to a different rule to justify a second round of applications.

• Asking Pulaski County Circuit Judge Wendell Griffen to dismiss a lawsuit against the Racing Commission filed by an anti-casino group, Citizens for a Better Pope County.

• Asking Griffen to dissolve a temporary restraining order that he issued Friday in that suit barring the Racing Commission from issuing the license for Pope County. Griffen scheduled a hearing for 9 a.m. next Tuesday to hear arguments and motions.

• Appealing to the Arkansas Supreme Court a decision in the second suit, in which Pulaski County Circuit Judge Tim Fox denied the Cherokees' request to intervene in the case filed by Gulfside Casino Partnership against the Racing Commission.

• Asking the commission to add to its Jan. 16 meeting agenda a request that the Cherokees first made in August -- to officially accept its application for the Pope County license based on a section of the Arkansas casino gambling rules that allows a second application window based on "for good cause shown," instead of a rule that allows another submission period if there were no applications received during the initial round.

"A careful reading of the orders from both Judge Fox and Judge Griffen shows that they are focused solely on the second application period and establish no barrier to prevent the Racing Commission from accepting, considering and approving our application pursuant to their existing rules, particularly 2.13.4(b)," Chuck Garrett, chief executive officer for Cherokee Nation Businesses, said in an email Wednesday.

"It is our hope that Judge Griffen will dissolve his TRO [temporary restraining order] or clarify it so that at the next meeting on January 16 the Racing Commission is not prohibited from accepting our application and moves forward with setting a hearing during which we can make our formal presentation."

Messages left for Gulfside attorney Casey Castleberry were not returned as of late Wednesday.

Gulfside's attorney Casey Castleberry said its application was the only one during the first window that met all the requirements of Amendment 100.

“Cherokee Nation Businesses failed to do so and, later, failed to appeal its denial," Castleberry said. "Judge Fox’s order confirmed CNB has no interest in this case and that the Racing Commission has no authority to establish a subsequent application period until Gulfside’s judicial review is fully completed.”

The second window for applications was opened after all five contenders for the Pope County casino -- Gulfside Casino Partnership of Mississippi, Cherokee Nation Businesses of Oklahoma, Kehl Management of Iowa, Warner Gaming of Nevada and Choctaw Nation Division of Commerce of Oklahoma -- were rejected by the Racing Commission in June because none contained endorsements by current local officials.

Constitutional Amendment 100 -- which was passed by voters in November 2018 to allow new casinos in Pope and Jefferson counties, and to allow the expansion of gambling at racetracks in Hot Springs and West Memphis -- requires local officials to endorse the new casinos.

Earlier this year, that requirement was narrowed by a Racing Commission rule and the passage of Act 371 of the state Legislature to require endorsements to come only from officials in office at the time the application is submitted.

Gulfside's application in the first round was the only one of the five that contained letters of endorsements from local officials, although they were issued right before the officials left office in December 2018.

The Mississippi company filed suit against the Racing Commission, saying that its application was the only one that met the constitutional requirements.

The second window -- which opened Aug. 19 after the surprise endorsement by the Pope County Quorum Court of Cherokee Nation Businesses -- spanned 120 days, from Aug. 19 to Nov. 18, four times the 30-day period afforded in Casino Gaming Rule 2.13.4(b).

The anti-casino group Citizens for a Better Pope County sued Dec. 27, seeking a permanent injunction to bar the Racing Commission from issuing a license based on any applications submitted during the second window.

Two applications were received during that time: one from Choctaw Nation, which did not include the required endorsements, and one from Cherokee Nation Businesses that included endorsements from Ben Cross, county judge of Pope County, and Roger Lee, mayor of Dover.

On Friday, Griffen granted the temporary restraining order, opining that the Racing Commission had no authority, according to its own rules, to open a second application window.

Specifically, Rule 2.13.4(d) states that a second window will be opened only if "no application is received by the Commission."

Fox, the judge in the Gulfside case, had issued an opinion the day before Griffen, saying that the second application window was invalid because there had been five applications received during the initial submission period from May 1-30, 2019.

Fox said the Cherokees had no standing in the case because the second window invalidates any applications received.

Garrett said in his email that Cherokee Nation Businesses is intervening in the civil cases because "it is important that we do all we can to protect our interests."

Griffen, however, approved a request for the Cherokees to intervene in the case filed by Citizens for a Better Pope County, but denied Gulfside's request to join the case.

No reason for the decisions were given by Griffen.

The Cherokees said in their motion that the anti-casino group's case should be dismissed as a whole and the temporary restraining order dissolved because the Racing Commission properly followed its own rules and Citizens for a Better Pope County has no standing to file a civil case against the Racing Commission and failed to exhaust all administrative remedies.

"Plaintiff's general, vague allegations of injury are inadequate to establish standing, much less the type of harm necessary to support a temporary restraining order or preliminary injunctions," Cherokee attorney Bart Calhoun said in the motion, calling the case "merely another attempt to thwart the casino licensing process."

In a letter dated Tuesday to Griffen, Calhoun requested a hearing at the court's earliest convenience and asked Griffen to clarify that the temporary restraining order bars only the Racing Commission from considering applications accepted pursuant to Casino Gaming Rule 2.13.4(d).

The Racing Commission in August used Rule 2.13.4(d) as authorization to open the second application window after rejecting the first five applicants. Specifically, the rule states that a second window will be opened only if "no application is received by the Commission."

"In order to comply with Rule 2.13.4(b), and to avoid any confusion in the future, CNB requests that the Racing Commission officially accept CNB's application 'for good cause shown,'" Richardson said in the Aug. 15 letter. "We respectfully suggest that good cause is demonstrated by the fact that in the initial thirty day window no applications were submitted with a letter or resolution of support from the Pope County Judge or Quorum Court holding office at the time of the application as required by Amendment 100."

In another letter, this one dated Monday, Richardson reminded Campbell that the Racing Commission "has never formally addressed" Cherokee Nation Businesses' Aug. 15 request that the application be considered "pursuant to the second route; i.e. for 'good cause shown.'"

"In August, we made a conscious decision not to challenge the establishment or length of the second application period put in place by the Arkansas State Racing Commission, but have always believed that rule 2.13.4(b) or 'for good cause shown' was the appropriate mechanism by which to submit and communicated that to the Racing Commission," Garrett said Wednesday in an email.

Richardson told the Racing Commission that Monday's letter should be accepted "as our formal request" that Cherokee Nation Businesses' request for consideration of its application for "good cause shown" be heard at the commission's meeting Jan. 16.

"CNB is the sole qualified applicant with the full support of the incumbent Pope County Judge, Pope County Quorum Court, the Mayor of Dover, and with a Resolution of Welcome from the Russellville City Council," Richardson said in Monday's letter. "Pope County's commitment to support CNB, and CNB only, has been formalized by an economic development agreement worth over $40 million to the people of Pope County. Despite this level of support from the local community, CNB has yet to have its casino application considered by the ARC [Arkansas Racing Commission]."

Scott Hardin, a spokesman for the state Department of Finance and Administration, which oversees the commission, said because of Griffen's hearing next Tuesday, "it is premature to speculate" on whether the commission will hear the Cherokees' plea.

More than 60% of the voters in Pope County rejected Amendment 100 at the polls and approved an initiated county ordinance that said an election must be called to allow voters to decide if they want officials to back a casino applicant.

The local opinion began to shift in June when the grass-roots group Pope County Majority was created.

Since then, the ordinance was repealed by the Pope County Quorum Court and the Cherokees agreed to an economic development agreement that included a $38.8 million "economic development fee" that would be disbursed among the county, some cities and some nonprofit organizations.

"I remain committed to CNB/Legends selection as Pope County's vendor of choice, as well as, committed to honoring the judicial system and its procedural issues," Cross said Wednesday. "At this point in the proceedings, we are simply content to wait and see how the judicial issues play out, while at the same time, recognizing the inevitable delays are costing both Pope [C]ounty and the state of Arkansas considerable financial impact and economic development."

Messages left for Russellville Mayor Richard Harris were not returned as of late Wednesday.

Pope County Majority members continue with a letter-writing campaign urging the commission to award the Pope County casino license to the Cherokees.

Michael Goad, a Pope County Majority leader, said in a letter Tuesday that the Racing Commission has a "constitutional mandate under Amendment 100" to award the license to the Cherokee Nation Businesses because it has the backing of the Pope County Quorum Court. 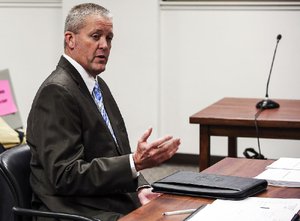 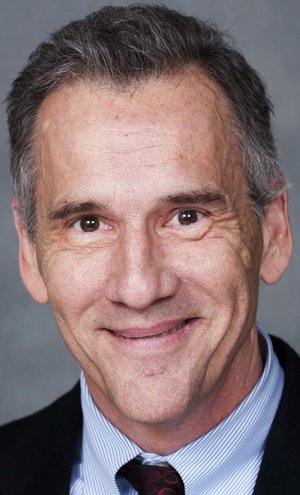 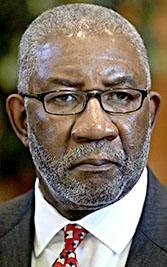