Texas salvager to clear auto-loaded wreck off Georgia coast by THE ASSOCIATED PRESS | January 9, 2020 at 2:05 a.m. 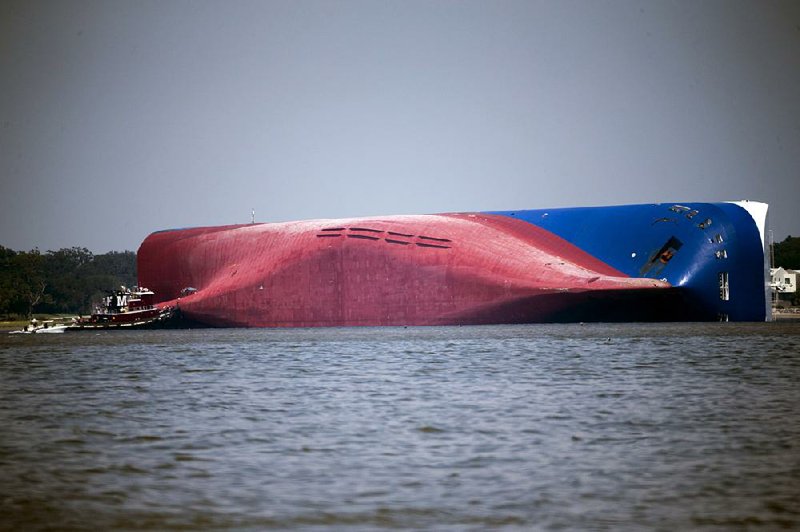 The cargo ship Golden Ray was carrying 4,200 vehicles when it capsized near Jekyll Island off the coast of Georgia in September. (AP/Stephen B. Morton)

BRUNSWICK, Ga. -- A Texas salvage company will cut up and remove a 656-foot shipwreck from St. Simons Sound off the coast of Georgia.

The Coast Guard's Unified Command has hired T&T Salvage LLC of Galveston, Texas, to remove the Golden Ray cargo ship, The Brunswick News reported. The ship, roughly the size of a 70-story office building, has sat overturned in the sound for four months.

T&T Salvage was chosen Tuesday from among six bidders, including DonJon-SMIT, the maritime emergency contractor that originally responded when the ship capsized on Sept. 8 while heading out to sea with a cargo of 4,200 vehicles.

The ship's pilot and 23 crew members were all safely rescued, including four men trapped for 36 hours before they were extracted through a hole drilled into the hull.

"We'd like to thank the initial response contractor, DonJon-SMIT, for their hard work and commitment throughout this project," said Chris Graff of Gallagher Marine Systems, which represents the Golden Ray and its insurers. "This is one of the most complicated marine casualty responses in U.S. history. DonJon-SMIT's commitment to safety, along with hundreds of other responders, resulted in no injuries despite all the emergent hazards they faced."

"T&T Salvage is known worldwide in the maritime industry and submitted a very thorough salvage plan that was evaluated as being the safest and most efficient," Littlejohn said. "After carefully considering multiple bid proposals and reviewing risk projections associated with each, the owners of the Golden Ray decided to use a different resource provider for this unique situation."

Meanwhile, Unified Command is still trying to determine the best type of barrier to build around the ship before demolition begins, a measure intended to prevent and mitigate pollution and environmental damage. Once that is decided, Unified Command said it will release a timeline for the ship's removal and other details about the process.

"This is a big step forward in this response, but there is still a significant amount of work to be done," said Coast Guard Cmdr. Matt Baer.