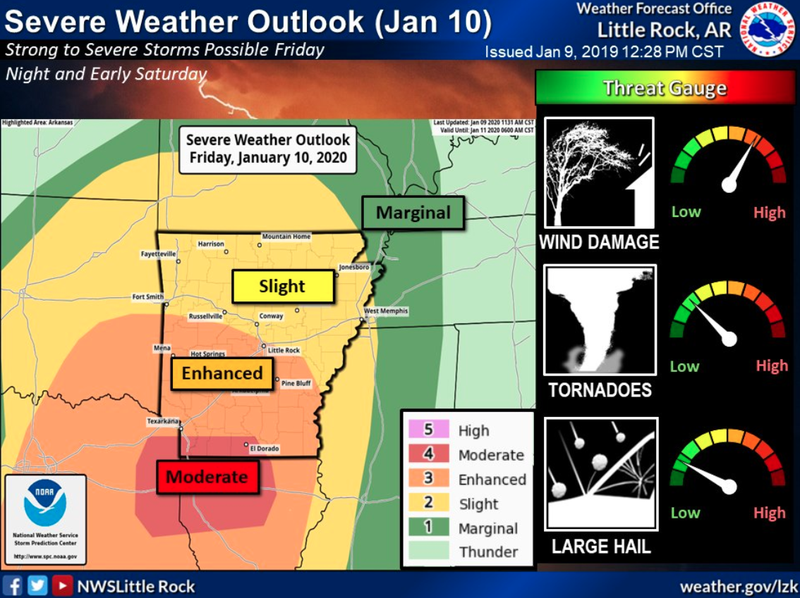 Forecasters have upgraded the risk level for part of Arkansas for severe storms Friday night into Saturday.

The new forecast also extended the enhanced risk area to a larger part of the state, including most of Arkansas' southern half.

The highest chance for severe weather this weekend in central Arkansas will be overnight Friday into early Saturday morning, and the National Weather Service is advising everyone to have a plan.

The southwestern portion of the state up to the Little Rock metro area is forecast to be at an enhanced chance for severe storms. Nearly every other part of the state will be at a slight risk of severe weather.

Meteorologist Dennis Cavanaugh said tornadoes and damaging winds are the main concerns, and the highest chance for them is after midnight, in the very early hours of Saturday morning.

Because most people will be sleeping when tornadoes are most likely, Arkansans should ensure they have a way to receive severe weather alerts before they go to bed, Cavanaugh said.

Cellphones will automatically generate a loud alert if a tornado or flash flood warning goes into effect, Cavanaugh said. But if a user has opted out of the alerts at any point, they will need to turn them back on in their phone’s settings to receive them again.

Cavanaugh said people can also purchase a weather radio that is designed to alert people in the event of severe weather and keep them informed.

Outdoor sirens are not useful for Arkansans hoping to be alerted during the night, Cavanaugh said, because they’re not designed to be heard indoors and won’t be loud enough to guarantee a person wakes up.

Before Arkansans go to bed, they should also have a plan for what to do during a tornado warning so there is no groggy scramble in the middle of the night, Cavanaugh said.

“Once you’re aware you’re in a warning, you may have only five to 10 minutes,” Cavanaugh said. “You don’t want to be thinking about where you’re going.”

Staying away from windows and exterior walls is advised. Basements are the most ideal place to shelter in a storm, but if a home doesn’t have a basement, the most internal room on the lowest floor possible is the best place to be.

Heavy rain and even snow

In addition to a severe weather warning, the western portion of the state including Little Rock will also be under a flash flood warning Friday night into Saturday morning.

Most areas will see 2 to 3 inches of rain, Cavanaugh said, with isolated areas seeing up to 4 inches.

He said even relatively small amounts of rain can lead to flash flooding in the winter because vegetation is dormant and won’t absorb rain as readily.

After the storm system moves out of Arkansas during the day Saturday, snow is possible. But where and how much is currently the most uncertain part of the forecast, Cavanaugh noted.

He said if there is any significant accumulation, it will most likely be in Northwest Arkansas, where cities including Harrison and Fayetteville could see up to an inch. Some counties stretching further south and east have a chance for a dusting.