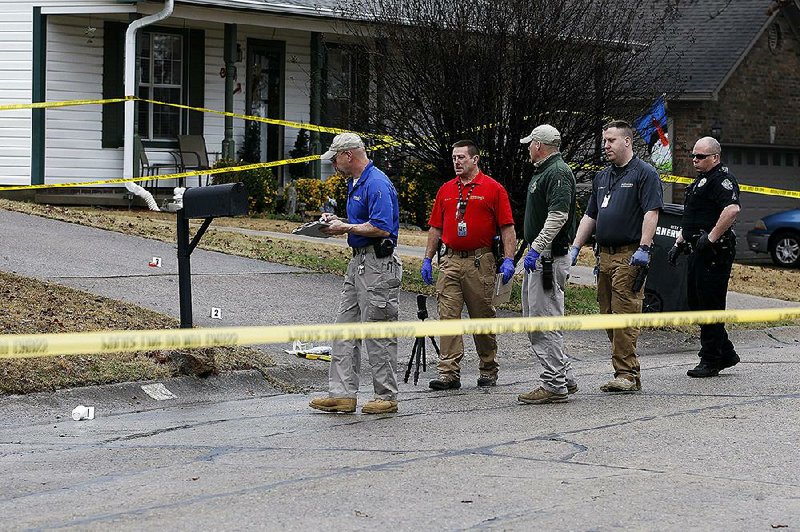 Sherwood police look for clues Friday morning at the scene of a double homicide on Markhaven Drive in Sherwood. (Arkansas Democrat-Gazette/Thomas Metthe)

SHERWOOD -- Police showed up for a wellness check a few hours before dawn Friday and found the lifeless body of Britney Alyse Bell lying in front of her house at 103 Markhaven Drive, police said.

Moments after entering the house and smelling the still-abundant odor of gunpowder, police discovered the body of Steve Lutman on the living room floor, according to an incident report obtained Wednesday.

The person who called police to the scene was Brandi Purtle, one of three suspects subsequently charged in the double slaying, authorities said. Purtle, 20, told police that she and her roommate had been drinking in a parked vehicle and she had fallen asleep. She awoke to the sound of her roommate's 6-year-old son telling her that his mother was asleep on the ground and he couldn't wake her up, the report stated.

Detectives said the true story was that Purtle conspired with two other suspects -- Napoleon Haire Jr. and Gabrielle Hill -- to commit a robbery. Purtle remained in the car with the boy while Haire and Hill carried out the robbery and double slayings, police said.

Haire and Hill returned to the car, and all three suspects fled the scene with the 6-year-old, which caused an Amber Alert to be issued, according to the report. The child was found unharmed later in the day at a North Little Rock hotel with Haire, police said.

Police have confirmed that the child was Bell's son.

The report stated that Lutman, 31, was killed with a handgun. It did not disclose how Bell was killed.

When police arrived at the house, they checked Bell's body for a pulse. After finding no pulse, one of the police officers administered CPR until paramedics arrived, the report stated.

Afterward, police knocked on the door and noticed that it was damaged. The doorbell also had been ripped off, police said.

Police entered the house and found Lutman in the front part of the living room with blood pooled around him and a bullet wound in his chest, according to the report.

In the master bedroom there were used syringes, a metal spoon with burnt residue and other paraphernalia, police said.

Sherwood police officer Cody Brumley stated in his report that he spoke with Purtle, who told him about being asleep in the car. She told Brumley that she checked for a pulse on Bell and decided that the boy needed to be away from the scene, so she drove him to his cousin's house in North Little Rock, the report stated.

Purtle was taken to the police station and interviewed by detectives. She smiled for her mug shot as she was being booked at the jail.

Haire and the boy were found later that afternoon, police said. The former was interviewed and charged. Hill was arrested Sunday.